A new pair of Neon Tieks has hit the market and I've got a closer look for you! Check out the new Ultraviolet Tieks ballet flats and see if this purple and pink patent leather flat is right for you. 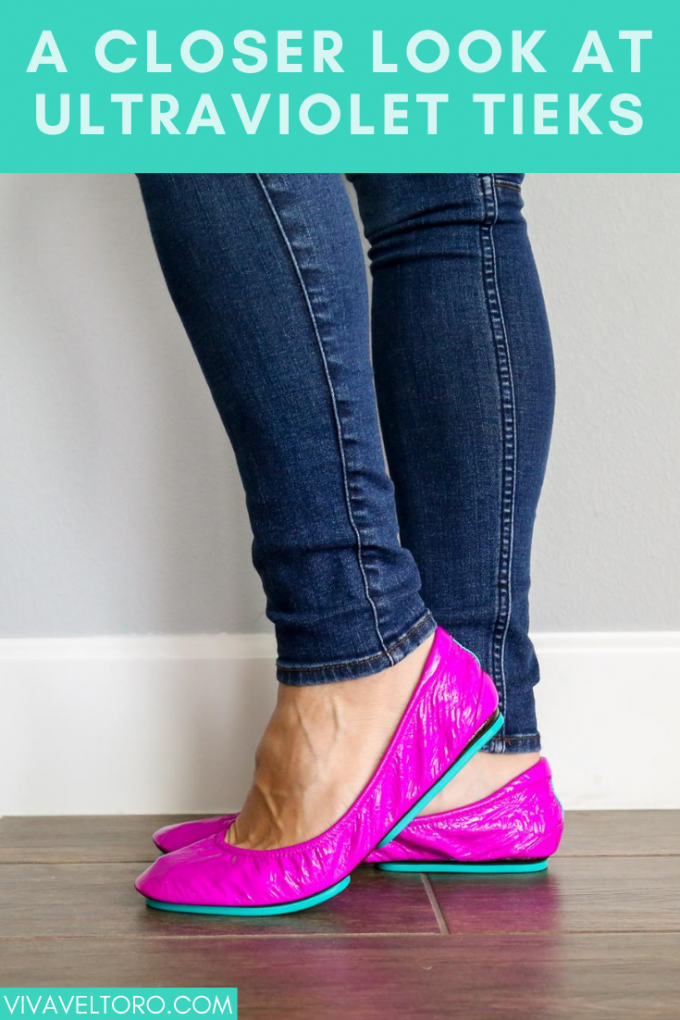 Neon Tieks have become some of my favorite color options over the past few years and I was so excited to hear Tieks by Gavrieli were releasing a brand new neon to the lineup this year. Tieks fans have been asking for another purple patent to be added to the Boutiek for a while now, and while many thought an amethyst color would be added to the jewel tone collection, we were surprised with a new neon instead. Ultraviolet was announced for summer 2020 and accompanied the re-release of the neons (if you're new to Tieks, the neon collection is usually only available during the summer months). 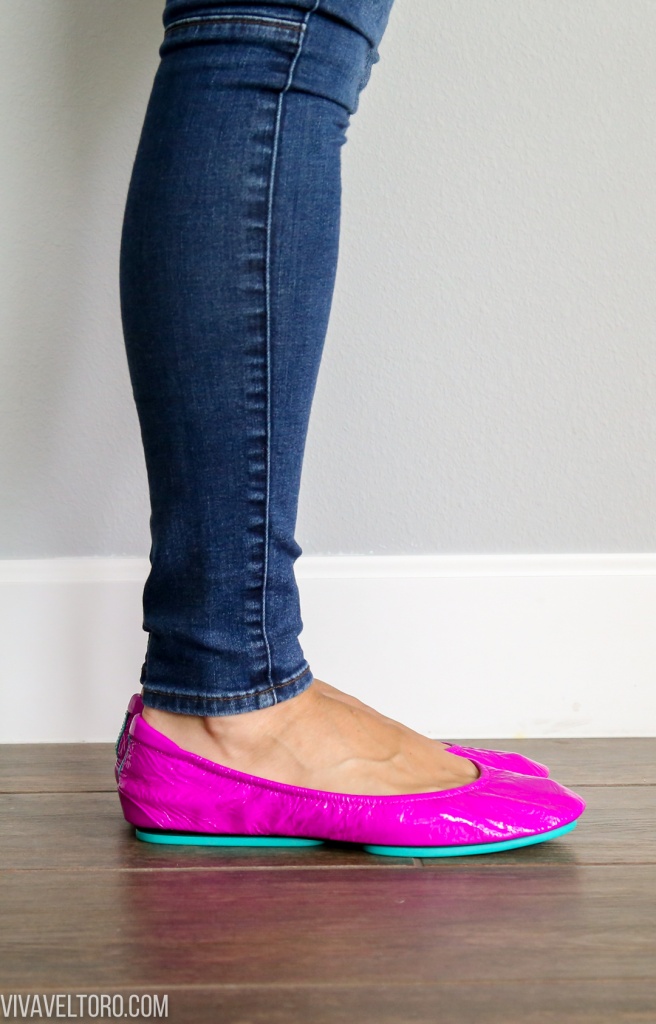 If you're not already familiar with Tieks, check out my full Tieks review to see why women all over the globe are obsessed with these designer flats. Not only are they foldable (and therefore the best flats for travel), they're super comfortable and that's why I have an extensive collection. I have a great resource if you're just getting started with Tieks. Find out which pair of Tieks shoes are right for you with my side-by-side color comparisons. I've got some comparisons with Ultraviolet down below. in photos and an embedded video.

Ok, back to UV Tieks. Ultraviolet is a highly saturated pop of color that's a great mixture of purple and pink. Capturing the true color of neons is always a challenge and I found that true of Ultraviolet as well. I feel like they're photographing a little more pink than purple. 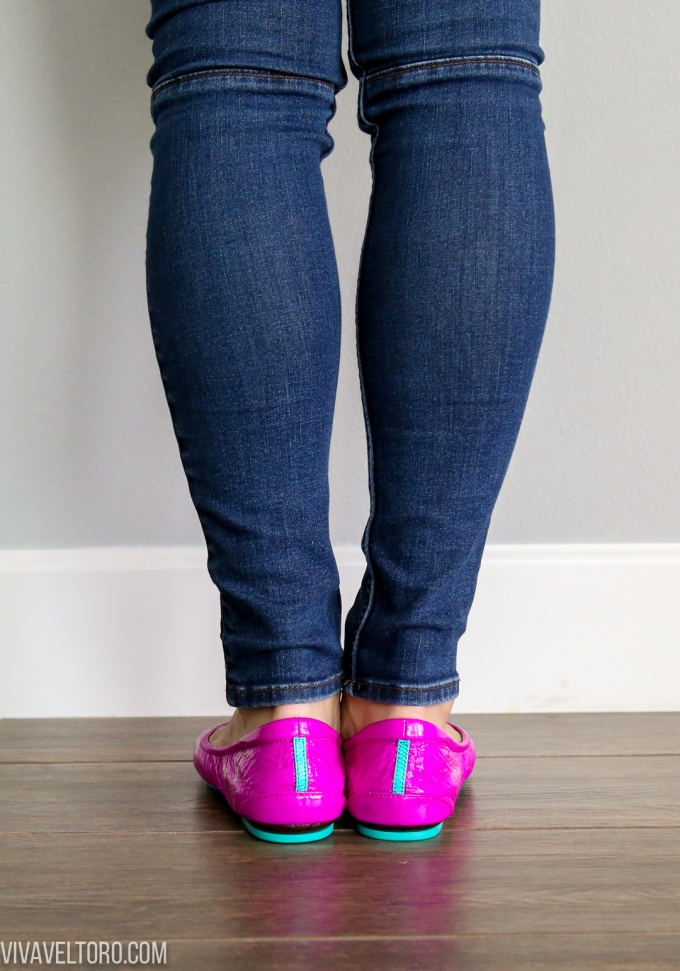 Like the other Tieks in the neon collection, Ultraviolet is made from full-grain leather with a patent leather finish. They're shiny and beautiful! They come a non-elasticized, cushioned back so they don't slip off your heel. They also don't pinch or cause blisters. 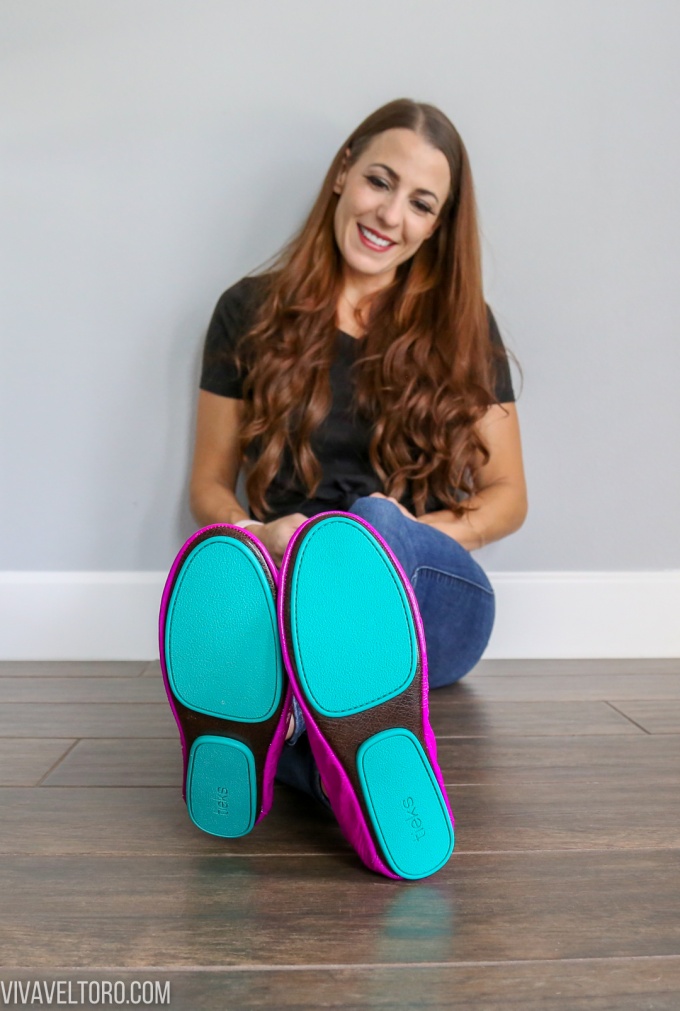 As with all Tieks, they also come with Tiek's signature blue non-skid rubber soles. I love the contrast between the blue soles and this bright pop of purple. It's such a great combination. 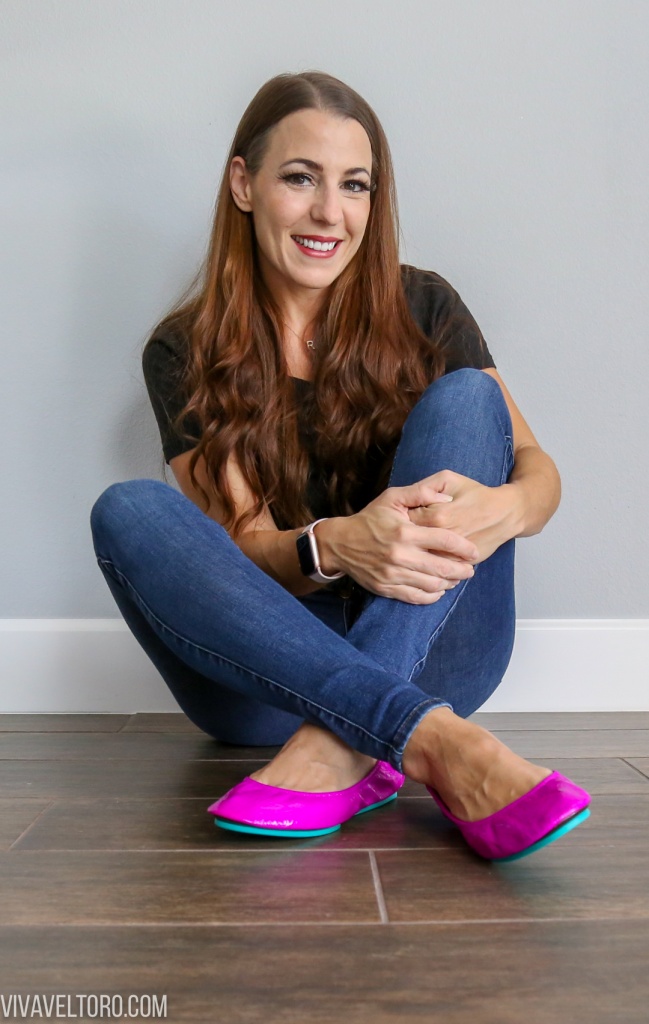 I get asked this question a lot. Many people think that patent leather Tieks must run smaller than Classics or Prints, but I don't find that to be the case. I'm an 8.5 or 9 in most shoes and I'm a solid 9 in Tieks. The only exception to that is with Mojave Tieks and some of the Vegan Tieks. I had to size up in those since they're made from fabric that doesn't stretch at all.

Are you ready for some side-by-side comparisons? I'm going to show you Ultraviolet next to similar colors and other colors in the neon collection. I apologize in advance for not having Lavender Tieks. I know that's going to be a highly requested comparison, but unfortunately, I don't have that those. 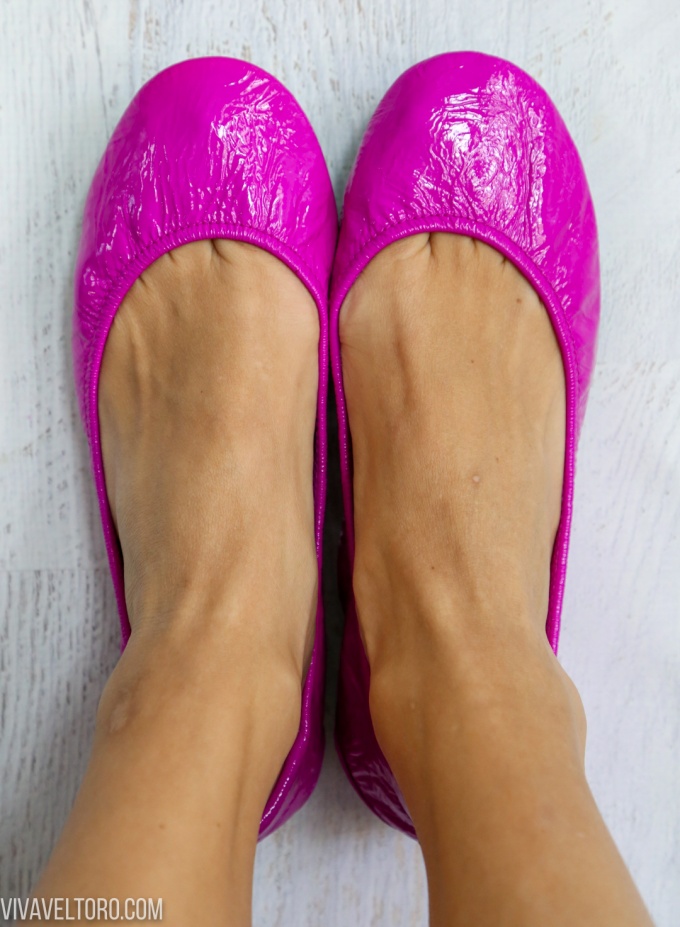 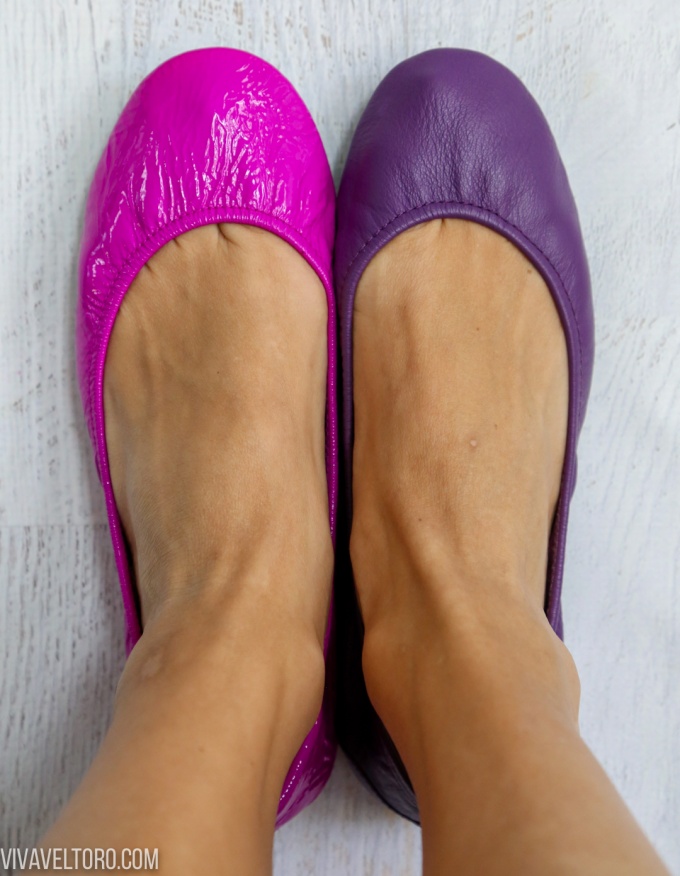 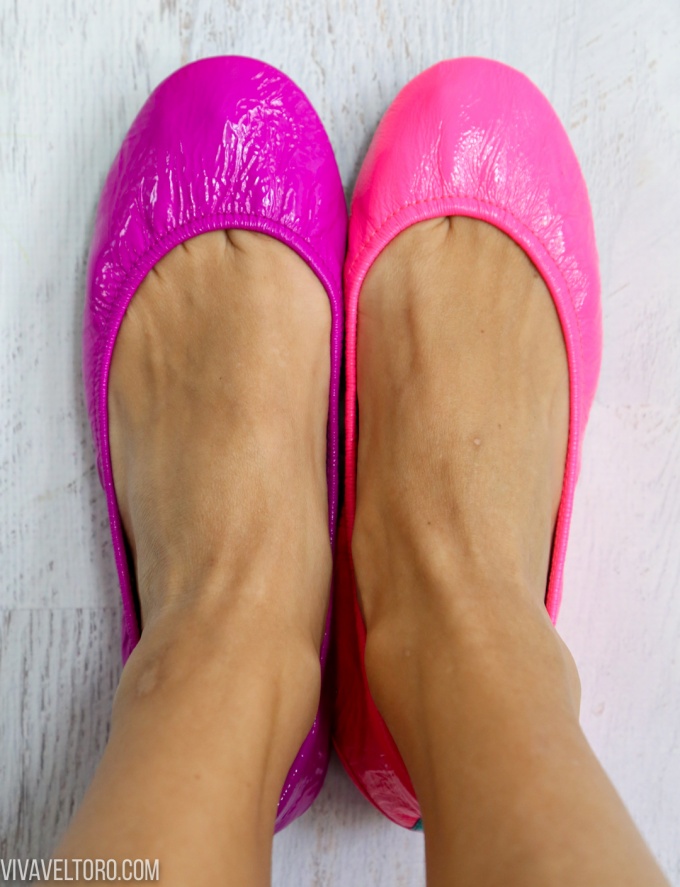 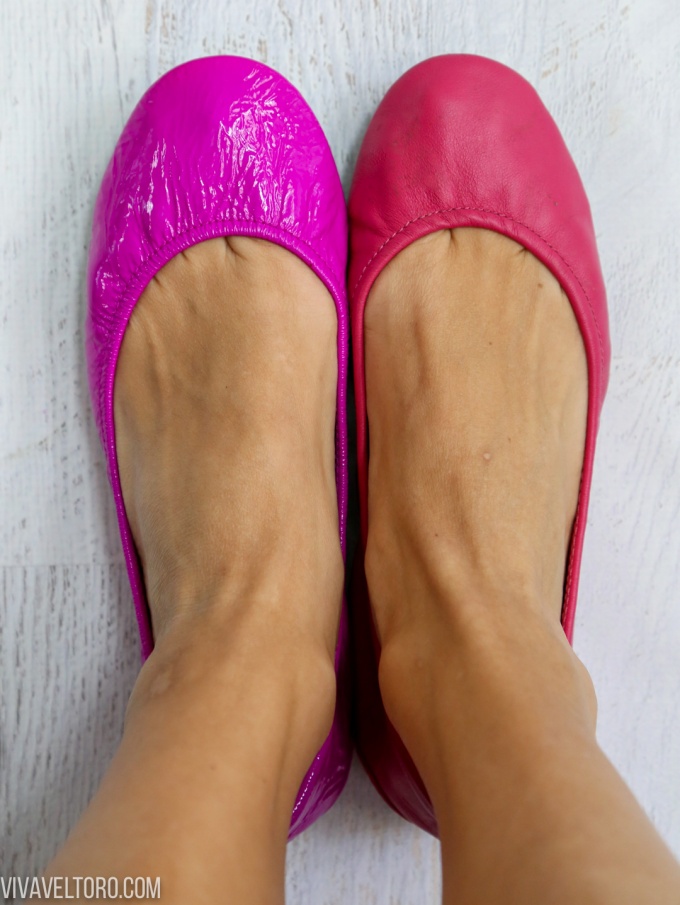 I've got even more color comparisons in the video embedded above!

So, what do you think of Ultraviolet Tieks?
Do you love them? Let me know!