Home » Why I Love My Vegan Tieks

When I bought my first pair of Tieks in 2015 I was very intrigued by the supple leather that would mold to your foot. And, the colors. Oh, the colors were glorious. Since I’ve amassed quite a collection of Tieks over the past few years, I get a lot of questions about the shoes and how they fit. I’ve gotten dozens of emails about vegan Tieks over the past several months, so I figured it was time to give these vegan flats a try.

To be completely honest, I had no interest in the Tieks vegan collection at first. First of all, I'm not vegan. Second of all, I love high-quality leather. So, why would I want a pair of vegan flats?

Well, the answer might have to do with my Tieks obsession. As I mentioned in my Tieks review, I sincerely love these ballet flats and I've collected quite a few pairs over the years. In fact, if you haven't read my post about how to pick the perfect pair of Tieks shoes, you really should; I've got real-life photos of around 40 pairs with side-by-side comparisons. But, I hadn't ever tried a pair of vegan Tieks. After several people asked me about them, I decided it was time to take the plunge. 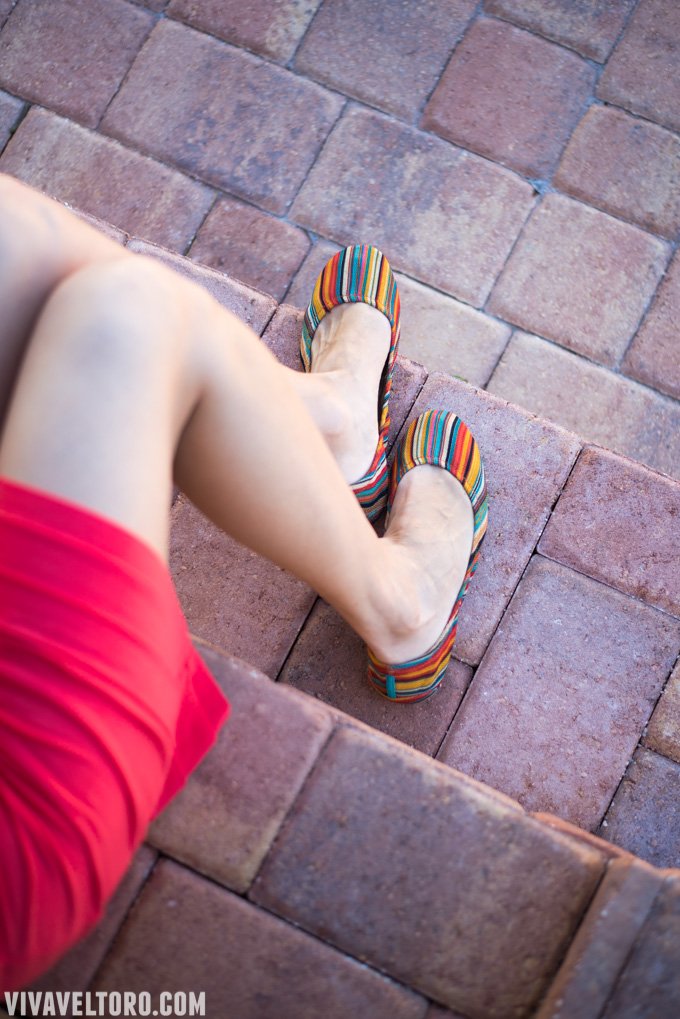 Many people are unsure about what size Tieks to buy. They only come in whole sizes and I find them to be pretty true to size. That means if you're an 8 in other shoes, you're an 8 in Tieks. Most people who are a half size will find that they can size up or down pretty comfortably. If you're a half size and have a wide foot, you'll probably need to size up. I'm a true 8.5 (but I wear a size 9 in most sneakers and have pretty normal feet) and have found that size 9 Tieks fit me perfectly.

However, this wasn't my experience with vegan Tieks. Since I'd heard in a few chat groups, like Tieks Anonymous, that vegan Tieks run small, I ordered my first pair of Greystone Tieks in size 10. They were too big. I contacted a Tieks associate who told me that yes, the vegan collection does tend to run small, but not the Greystone. The Greystone Tieks are made from an interpretation of wool fabric and actually run true to size. Sunset Stripe, Silver Lake, Echo Park, and Brentwood are made from a different material (which is a burlap interpretation) and won't stretch or mold to the foot like leather varieties, so most people will need to size up. I decided to try a pair of Sunset Stripe instead because the colors were calling my name. The size 10 Sunset Stripe felt pretty good, but they felt a little roomier than my Classics and Patents. I put in an exchange for a size 9 Sunset Stripe (thanks to the Tieks awesome return/exchange policy) but as soon as I received them I knew they would be too tight to wear all day. They seemed okay in length, but the material felt tighter and I knew it wouldn’t give overtime. I opted to stick with the size 10 and I’m so glad that I did. 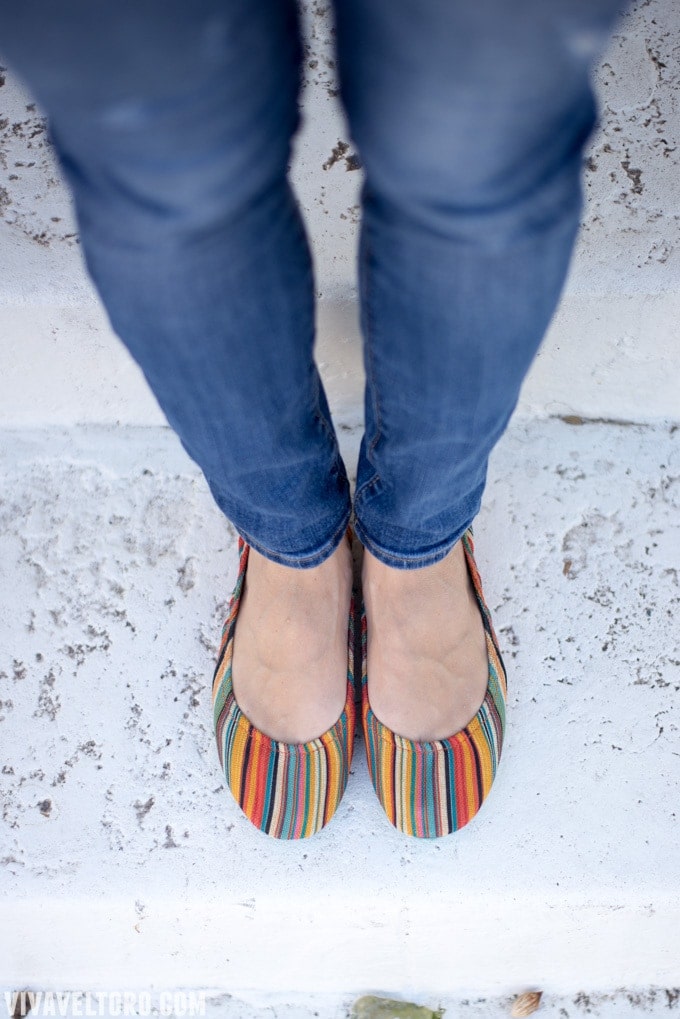 Are these vegan shoes comfortable?

I was a little skeptical about whether these vegan shoes would be as comfortable as my leather Tieks, but I’m thrilled to report that they are just as comfortable in every way. The footbed felt a bit different since the insole is made of synthetic material and not leather, but overall they felt similar and comfy. This pair fit great right out of the box. 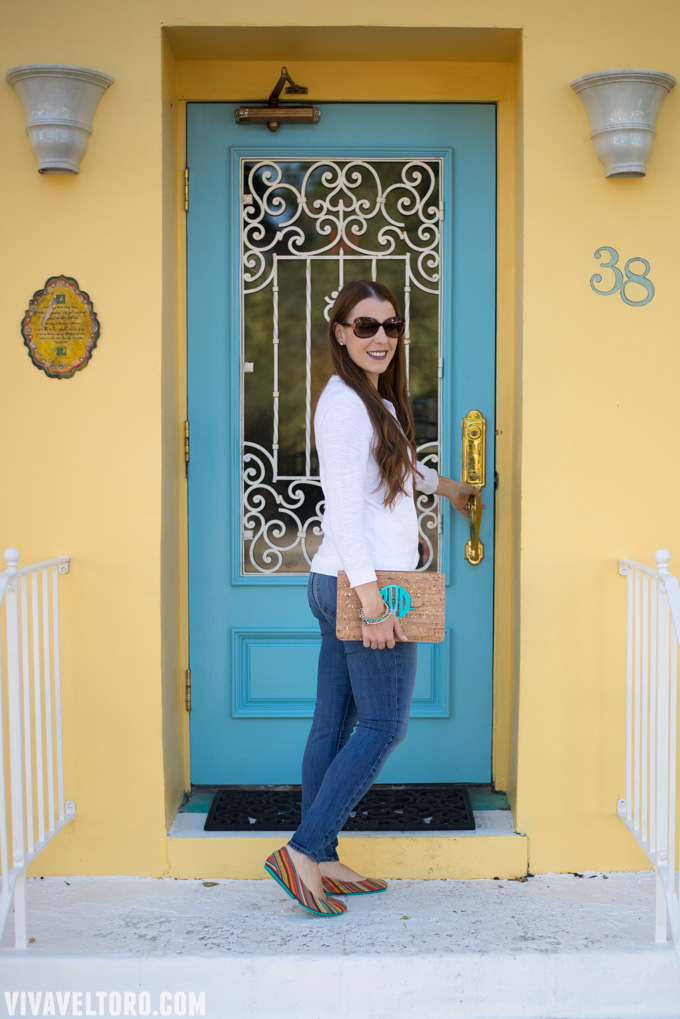 But, they're fabric, not soft and supple leather, so how can these vegan shoes be worth the $175 price tag? Well, these flats are hand-crafted using the same 150 steps that it takes to create every other pair of Tieks. The workmanship is remarkable. Plus, the beautiful Italian fabric is extremely high-quality and more durable than I could have imagined.

I wore my Sunset Stripe Tieks every day for an entire week and put them to the test. On day one, I wore them to the grocery store and ran my foot over with the shopping cart no less than three times. I was sure I'd end up with marks or frayed fabric, but that wasn't the case at all. Not a scuff! The next day, I wore them to my brother's house for a family party and stepped out of my SUV into wet, muddy grass. I went inside to clean the fabric flats and found that the mud came off pretty easily with spot treatment. 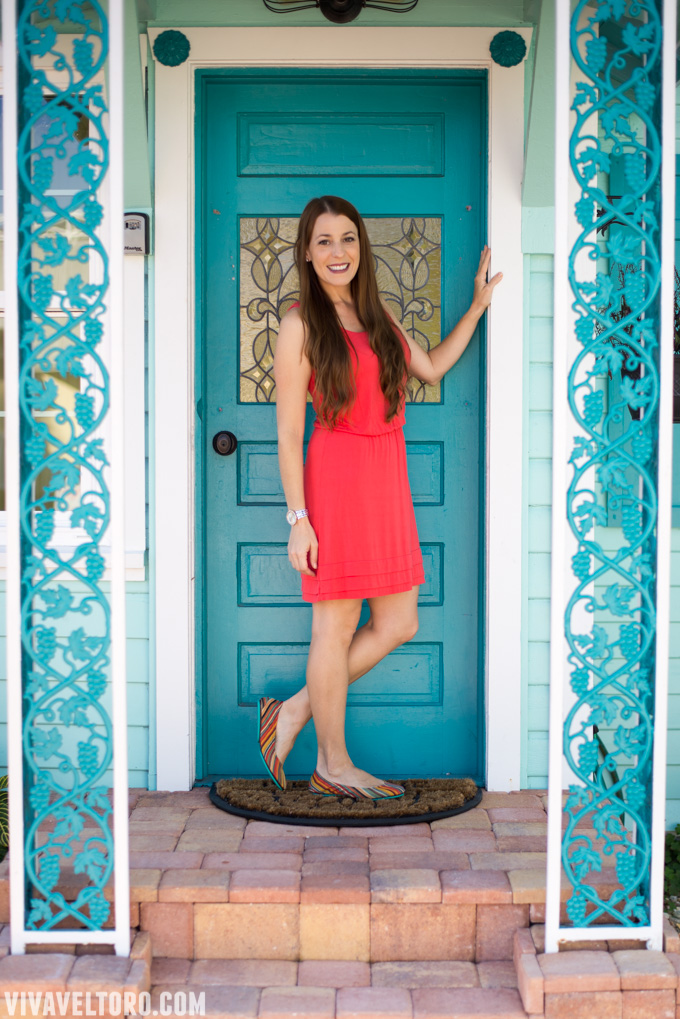 Besides the fact that these vegan shoes are super comfortable, I’m also thrilled with the colors and style. Sunset Stripe has such a great mixture of yellows, oranges, and blues and I love the way they pair with my wardrobe. 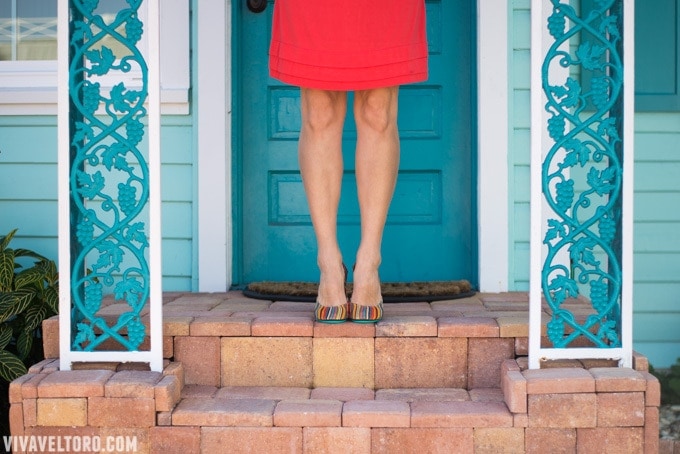 As I mentioned, I'm not vegan so purchasing these flats wasn't for ethical reasons, but I can certainly see the value in them for those who live a vegan lifestyle. I bought them because I was genuinely interested in the print and to see if they'd be as comfortable as my other Tieks. They passed with flying colors. I'd buy another pair of vegan Tieks without hesitation.

So, what do you think about vegan Tieks?
I'd love to hear!

All images were taken by the insanely talented Jenny B. Photography.