Toy Story 4 is in theaters now and I've got some exclusive details about making the film from Bo Peep herself, Annie Potts. See why she almost missed out on the part and what she thinks about Bo's independence below. 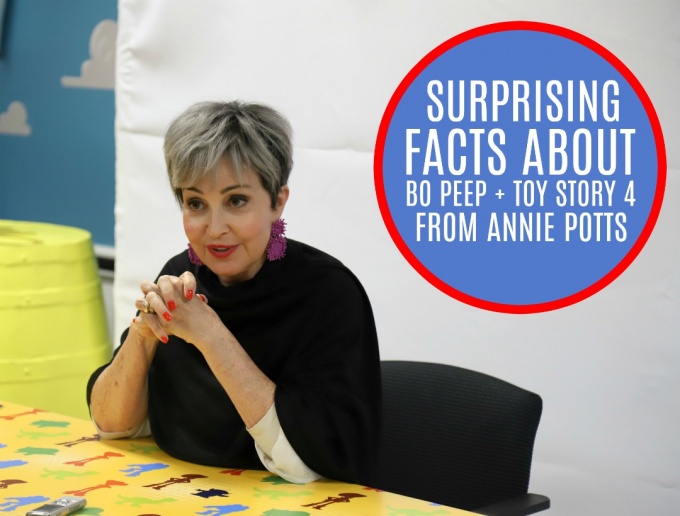 Annie Potts premiered as the voice of  Bo Peep, the beautiful porcelain doll belonging to Andy's little sister in the original Toy Story nearly a quarter of a century ago. We got to sit down with her after the official press junket at Hollywood Studios in Orlando, Florida and had an open forum to ask her questions about her role as Bo Peep. As you can imagine, she's just as lovely in person as she appears on the screen and as the voice of Bo.

Here are some fun takeaways from our time with Annie Potts and surprising tidbits about Bo Peep and Toy Story 4.

She almost missed out on the chance to play Bo Peep.

When we asked Annie Potts about whether or not she had to think about coming back to the cast to reprise her role as Bo Peep, she said, "Oh No, when Pixar calls, you say 'Yes!'" She went on to tell us about how she came to get the role in the first place.

Years ago, when the first one came to me, my Agent just called me and said, 'Annie, they want to you to do a voice in the first ever completely computer-animated feature length film.' And I was like, 'I don't even understand what you just said and I am busy.' I had a Toddler, I had a teenager and I was doing a series. [He said}, 'Well they've sent you a disc, you know, just take a look at it. There's some shorts that they've done.' So, I totally forgot about it. They called me back a couple of weeks later and they said, 'Did you look at it?' And I was like, 'What?' [My agent said], 'They told me they'd love to have an answer from you.' I was like, 'I'll get to it and forgot about it again.' Meanwhile, they sent me another disc so I have boxes piling up on my kitchen counter. And I came home one afternoon. My youngest son had opened one of the boxes and I came in the door and he was on me like white on rice. He said, 'Mommy, Mommy, Mommy you got to come,' and he popped the disc and of course, he'd been watching them all day. And I watched like one and a half of them and went, 'Oh, I'm so sorry, Mommy's got to go make a call!' So I called him and  said, 'Oh I hope the offer still is there because I would very much like to be a part of anything these people have to do.'

LOST AND FOUND – In Disney and Pixar’s “Toy Story 4,” Woody is reunited with his long-lost friend Bo Peep, who’s been on the road for years. She’s become an adventure-seeking free spirit whose strength and sarcasm belie her delicate porcelain exterior. ©2019 Disney/Pixar.

She went on to say how beautiful and impressive the imagery was, even back then. It just blows the mind to see how far the animation has come in the past two decades. 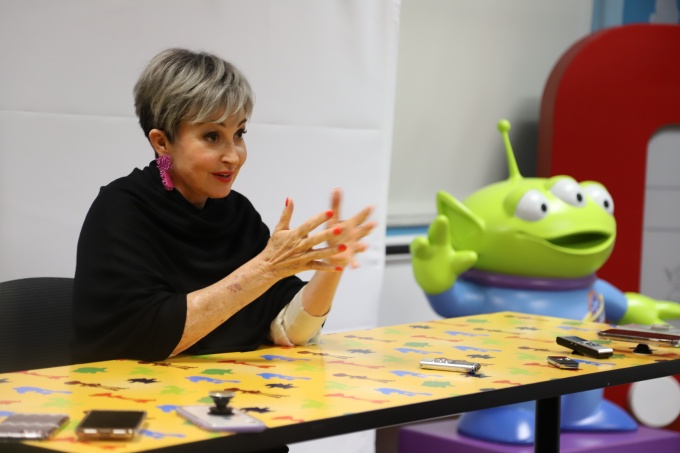 Annie Potts described making Toy Story 4 as being similar to a treasure hunt.

As I mentioned in my fun facts about Toys Story 4 post, Tom Hanks said they never saw a formal script for Toy Story 4 (or Toy Story 3 for that matter). Annie Potts went on the tell us a bit more: "We never saw the script. So was like going on a scavenger hunt and Easter Egg hunt, but with a guide... It was a revelation each time I came back in. And not really until about 6 months ago did I start to understand how big the role was because the piecemeal fashion in which we had built it. Sometimes there would be 6 months lag time before I came back again and sometimes I would forget. I've been working on this for over 4 years so I wasn't quite sure what to expect when I saw it. And I was sort of knocked out when I saw what they had created of her.

GIGGLE MCDIMPLES -- In Disney•Pixar’s “Toy Story 4,” Bo Peep introduces Woody to her best friend Giggle McDimples. A miniature plastic doll from the 1980s, Giggle is Bo’s confidant, supporter and advisor, and spends a lot of her time perched on Bo’s shoulder. Featuring Ally Maki as the voice of Giggle. ©2019 Disney•Pixar.

She was proud to be the voice of a fantastic character for young girls and boys to see.

In the first movie, you don't really get a sense of who Bo Peep is. Annie Potts went on to say, "She'd had some limitations before being a lamp. Once they got her off the base, all bets were off!" But, in Toy Story 4, you see that Bo has become a strong, independent toy that can do almost anything. When we asked Ms. Potts if that is what she hoped young children would get from her, she said, "I have the privilege of presenting those qualities that are so admirable and inspiring. She's been knocked around quite a bit and she's just kept going and in a cheerful, inventive way. I mean, this girl drives a Skunk Mobile! No one is going to screw with her. She's figured out a way to make it happen. So yes, I think it's fantastic for young women and young boys to see this." She also added, "Tto young girls, this is what a woman is and can be. I'm just thrilled to voice those qualities. It is such a privilege when you're giving positive messages, especially to children."

The possibility of her grandchild having a doll with her voice attached is thrilling.

It's been 24 years since Toy Story premiered and a lot has changed since then. A theme within Toy Story 4 is new beginnings and saying goodbye. When we asked how her life had changed over the past 25 years since she'd started her Toy Story journey and her own hellos and goodbyes have influenced her, Mrs. Potts told us, "25 years ago? Well, I had a little one and was about to give birth at the premiere of the first one. So, I clock everything by my children. So, I was saying 'Hello' to a lot of new people at that time. And of course now they're grownups and a lot of stuff has happened with them always in the foreground. My oldest son is now married and I think they'll be starting a family soon and it makes me feel so good to think that in the not-too-distant future, maybe my granddaughter will be holding a doll whose string she can always pull and my voice will be there with her.

Toy Story 4 is in theaters now!
Be sure to get your tickets and tell me your reaction
on social media using #ToyStory4