As a member of the Stream Team, I've teamed up with Netflix for this post.

My little man is gearing up for another year of preschool, and while I'm pretty sure he's looking forward to seeing his darling friends again, I know a new year comes with changes and a little uncertainty. Now that we're closing in on the end of summer break, I've been trying to prepare him for the changes ahead. We've gotten back into our stricter bedtime routine, started waking up a little earlier, and we've been talking about all the new faces he's going to see. I want to prepare him for all the things that lay ahead, but of course I'm trying to do it in a fun way. That's where Dinotrux comes in!

Based on the award-winning children's books by Chris Gall, Dinotrux is the first exciting “action show” tailor-made for younger kids with strong messages about independence and cooperation to go along with its unique blend of action, comedy, adventure. In this Netflix original, prehistoric hybrid dinosaur-construction vehicles (you heard right - half dinosaur, half truck - or in other words, my toddler's DREAM!) team-up to use their different skills to solve problems and show that even the most uncommon of duos, like Ty-Rux and Revvit, can form friendships of a lifetime. Your kids can learn some valuable life lessons about teamwork, all while watching a super cool TV show and having fun. 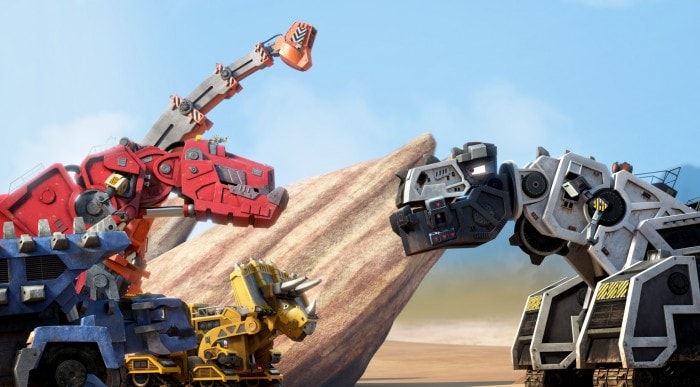 The cast of characters includes Ty Rux, a massive Tyrannosaurus Trux, and his best friend Revvit, a razor-sharp Reptool. Along with friends like Skya the Craneosaur and Garby the Stegarbasaurus, the Dinotrux and Reptools join forces for the first time ever to build a bigger, better world and battle back against the biggest and baddest Dinotrux of all: D-Structs, who threatens to wreck everything they’ve built.

As you can see from the stills above, the animation is AMAZING! Dinotrux is now joining the award winning roster of Dreamwork Animation TV shows that are bringing movie quality to children’s series airing only on Netflix. I'm pretty sure your kiddos are going to love Dinotrux! It just premiered on Netflix's streaming service on August 14th, so be sure to check it out!

You can see a clip here:

Disclosure: I'm part of the Netflix Stream Team and received a promotional item for participating. All opinions are my own.