Home » What It's Like to Walk the Red Carpet - Moana Premiere 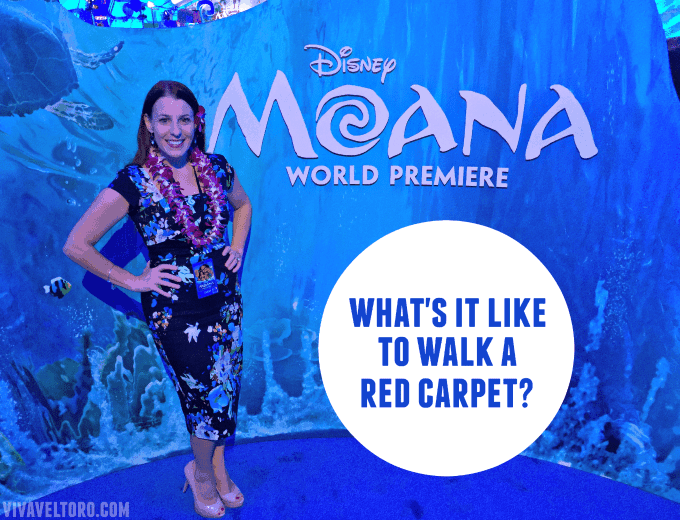 When I tell people that I'm jetting off to the west coast for a movie premiere they often look at me a bit puzzled. Then they inevitably ask, "What is it that you do again?" Fair enough. While a lot of people know I put my career as a nurse practitioner on hold when I had children and then became a blogger, they don't really understand what it is I do. Well, besides writing about my family and recipes and crafts, I also cover entertainment and events as a member of the media. After posting about my love for Disney for some time, I was invited to attend a press junket almost 2 years ago and then I got to walk to the carpet at the Finding Dory premiere.

The next question that people ask me is, "What's that like?" Well, just like it sounds, it's a bit glamorous and mainly just fun! As a mom of two toddlers, it's not often that I get the opportunity to get dressed to the nines and sit among celebrities in the El Capitan theater to watch the world premiere of a film that they just spent the last 4+ years making. It's exhilarating. That's why when I got a pixie dusted email inviting me to attend the world premiere of Disney's newest animated film Moana, I jumped at the chance. 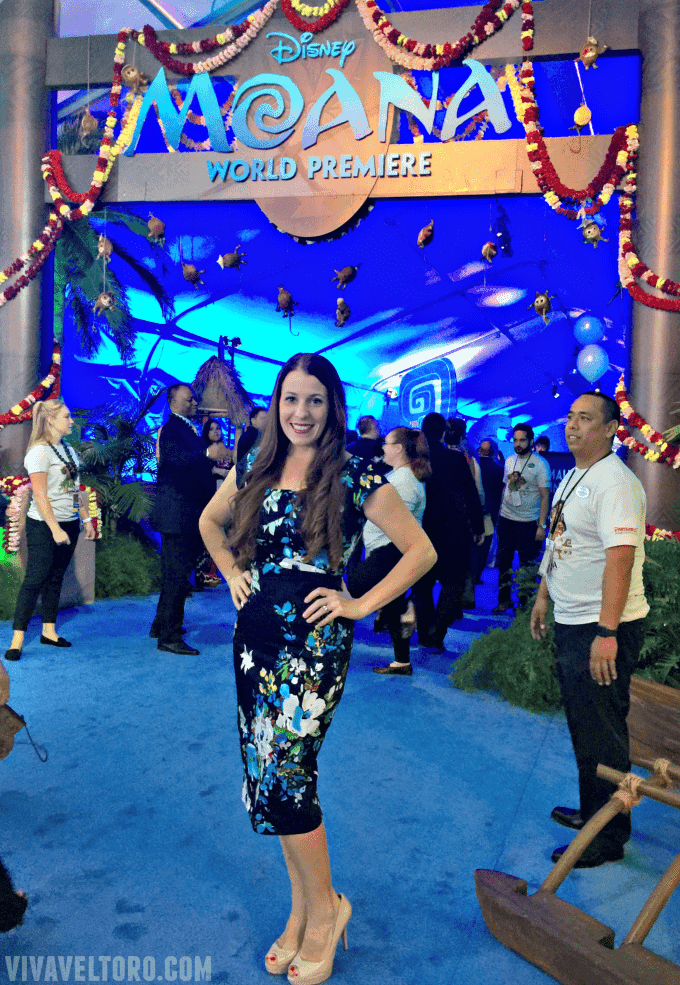 First things first; you need a dress for an event like this. For the Finding Dory event a lot of us (there were 25 bloggers invited) dressed for the theme, donning royal blue, yellow, orange or other festive colors to celebrate the film. For Moana, a lot of us decided were inspired by the Polynesian theme and that certainly helped me choose my dress. In case you're interested, I got this retro style "wiggle dress" from Unique Vintage. 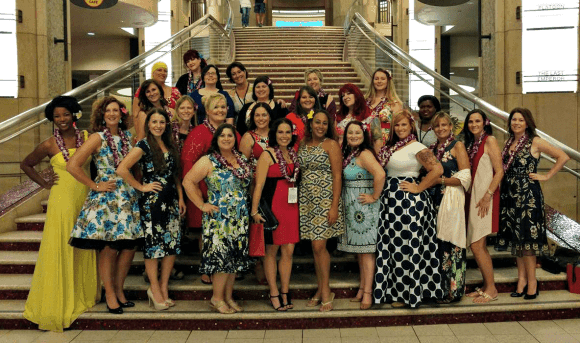 Then, the bloggers, who are from all over the country, head to LA for the big event. The premiere also includes a press junket so you have the opportunity to interview the incredibly talents actors, filmmakers, producers, and composers. It's truly a once in a lifetime experience, especially if you're a Disney fanatic and movie buff, which most of us are.

When it's movie time, we collect our tickets and prepare to walk the carpet. Now, we don't get to strut down the main red carpet (which in this case usually encompasses the entire street section in front of the El Capitan theater) with the talent and film makers. Not yet anyway. We walk directly next to the large red carpet so that the talent is free to complete interviews with shows like Access Hollywood, ET and more. They also need space to pose for all of those beautiful photos that will grace the covers of magazines like People and Entertainment Weekly. 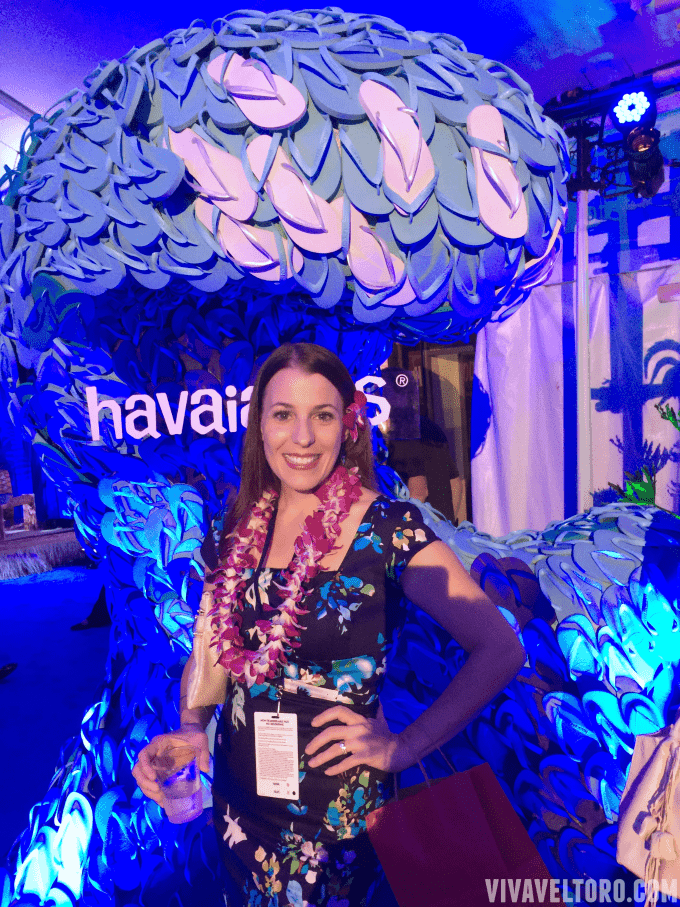 Once we get down the red carpet line though it's game on. There is usually a party to celebrate the film, and for Moana it actually happened before the premiere. The cast and film makers are joyfully celebrating the fruits of their labor and everyone is so happy to be there to support the movie. We also have the chance to meet some of the partners of the film like Havaianas who collaborated with Disney for fun Moana flip flops for kids. 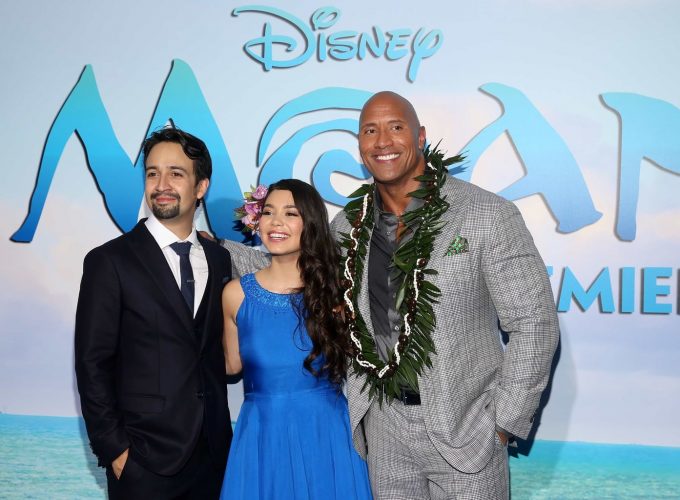 During the party we're able to eat, drink and celebrate with Hollywood's A-listers, in this case Dwayne "The Rock" Johnson, Lin-Manuel Miranda (of Broadway greatness, HELLO Hamilton!), and Disney's newest princess Auli'i Cravalho.

We also get to snap photos with celebrities. 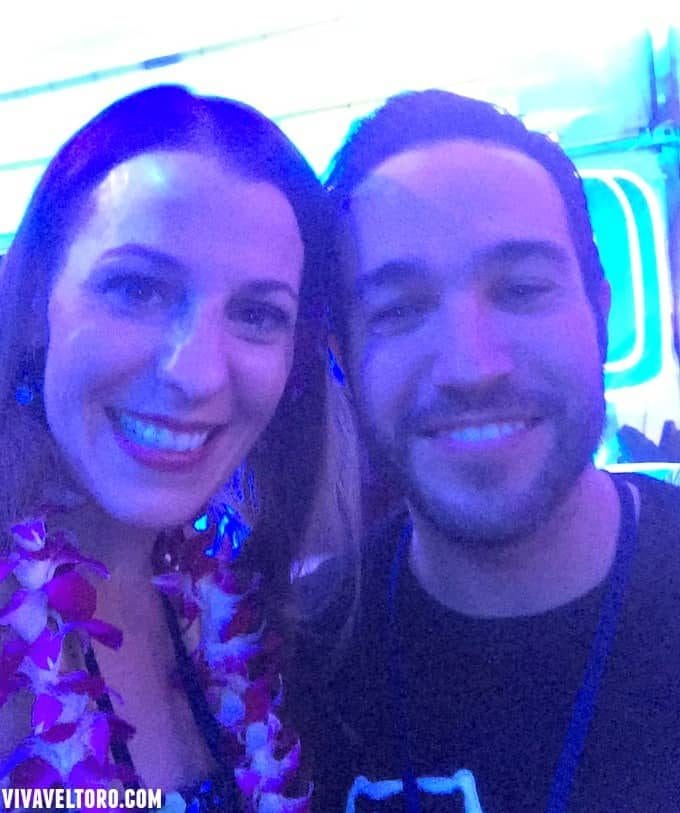 With Pete Wentz from Fall Out Boy 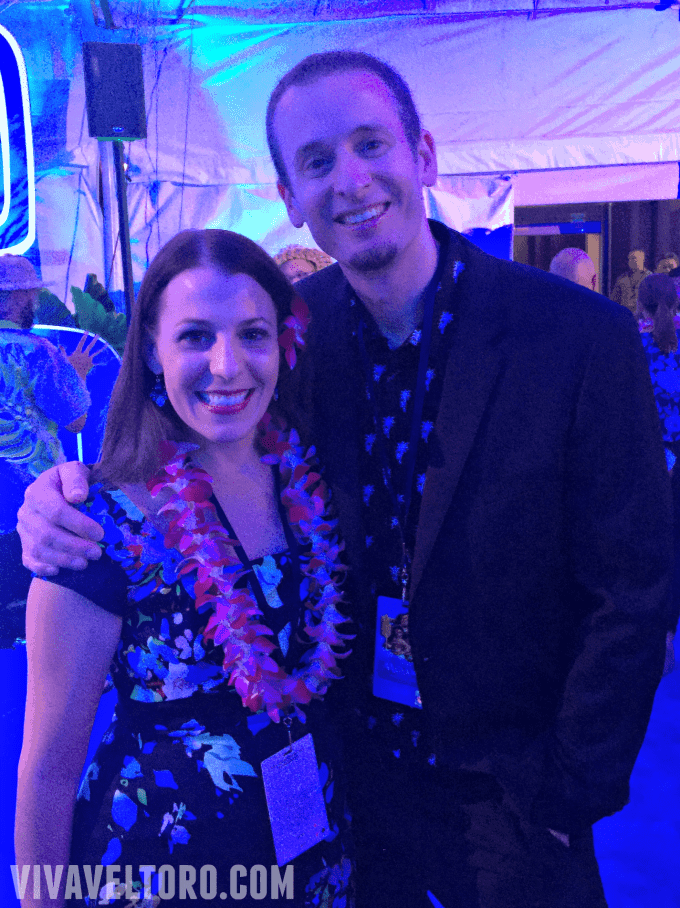 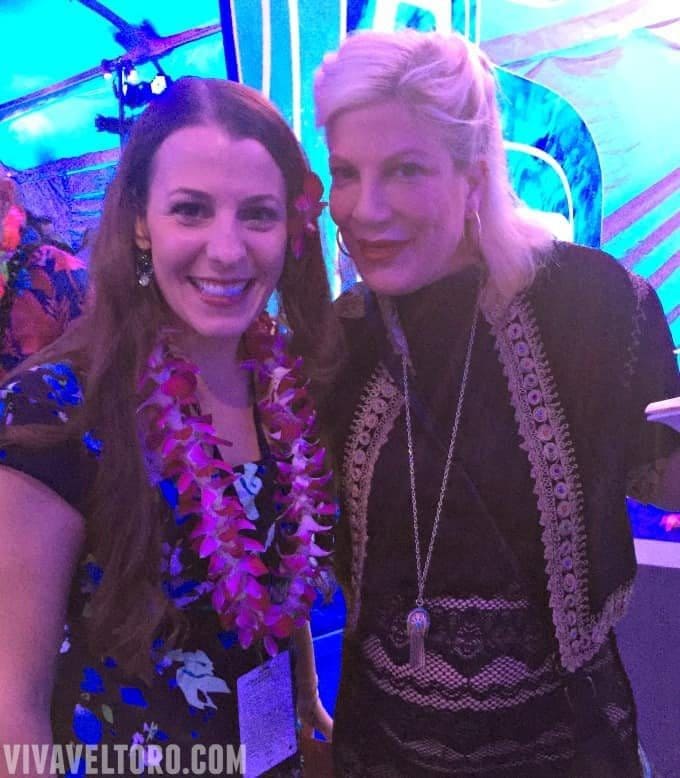 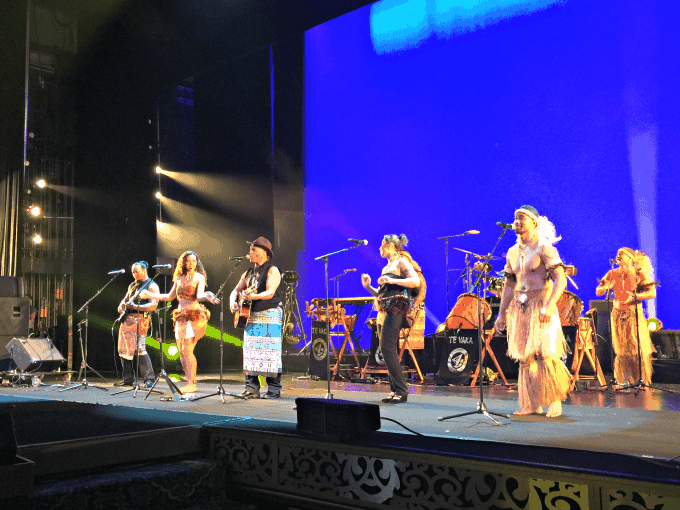 After the party, we headed into the theater to watch Moana. This is such a unique experience, because in many cases you're watching alongside the people who've worked tirelessly on the film for the past 4 years. They're seeing it in it's entirety for the first time, right next to you. We were also treated to a special performance by singer/songwriter Opetaia Foa'i who helped create the music for the film. It was awesome! 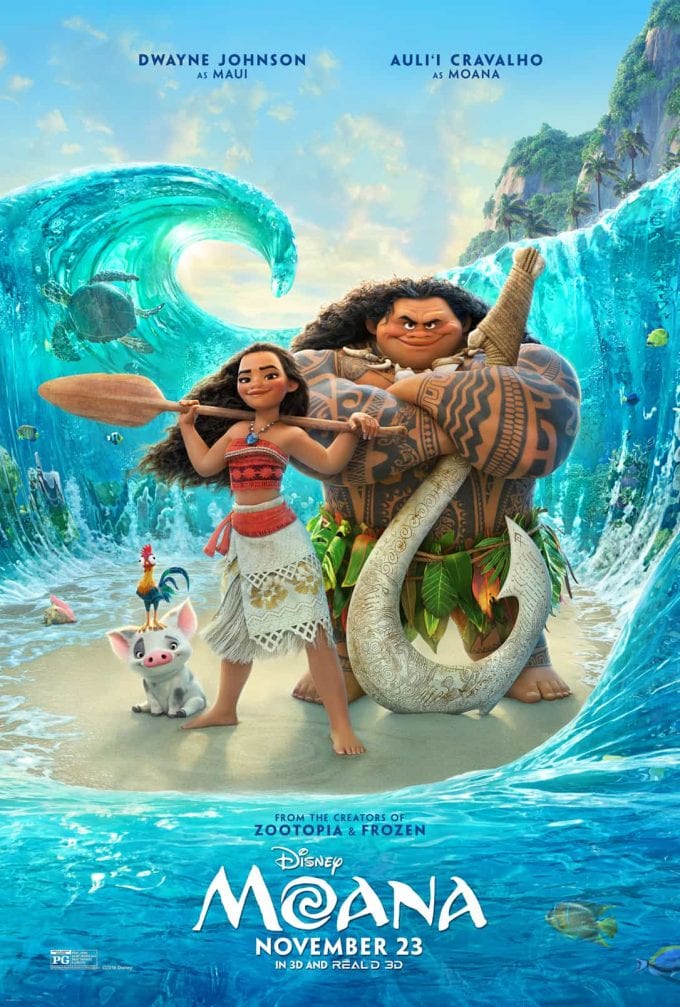 Three thousand years ago, the greatest sailors in the world voyaged across the vast Pacific, discovering the many islands of Oceania. But then, for a millennium, their voyages stopped – and no one knows why.

From Walt Disney Animation Studios comes “Moana,” a sweeping, CG-animated feature film about an adventurous teenager who sails out on a daring mission to save her people. During her journey, Moana (voice of Auli’i Cravalho) meets the once-mighty demigod Maui (voice of Dwayne Johnson), who guides her in her quest to become a master wayfinder. Together, they sail across the open ocean on an action-packed voyage, encountering enormous monsters and impossible odds, and along the way, Moana fulfills the ancient quest of her ancestors and discovers the one thing she’s always sought: her own identity. Directed by the renowned filmmaking team of Ron Clements and John Musker (“The Little Mermaid,” “Aladdin,” “The Princess & the Frog”) and produced by Osnat Shurer (“Lifted,” “One Man Band”), “Moana” sails into U.S. theaters on Nov. 23, 2016.

Check out the Moana trailer here:

Disclosure: Thank you to Disney for inviting me on this press trip to cover the Moana premiere.