What's on your bucket list? Attending a red carpet movie premiere was on mine and I was able to cross it off thanks to Disney/Pixar! I'm sharing my Finding Dory world premiere experience and Finding Dory review. 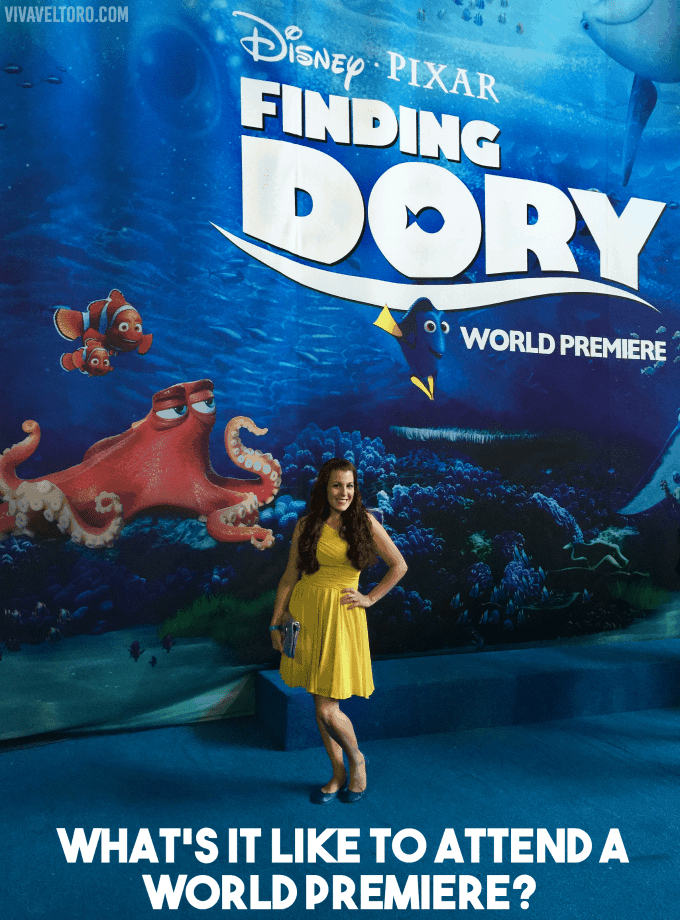 A few years ago I started a "40 before 40" bucket list. I'd already done a lot of things in my 30+ years on Earth, but it's a big world out there and I wanted to see and experience more of it. Since I'm a fan of celebrity culture, attending a red carpet premiere was something I thought I'd only get to dream about... until I started working with Disney. I've attended a few of their press events in the past, but when I opened my email inbox last month and I saw the title "Disney•Pixar, Disney Channel & Disney XD Invites You to Los Angeles," I hoped it would be that magical invitation to a red carpet event and it was! Not only that, it was for the Finding Dory world premiere. Could it have been any better?!

I immediately started looking for my red carpet dress and it just so happened that many of the bloggers on the press event team were all thinking along the same lines. Clad in Dory blue and yellow, we hit the carpet of the El Capitan Theatre with gusto! 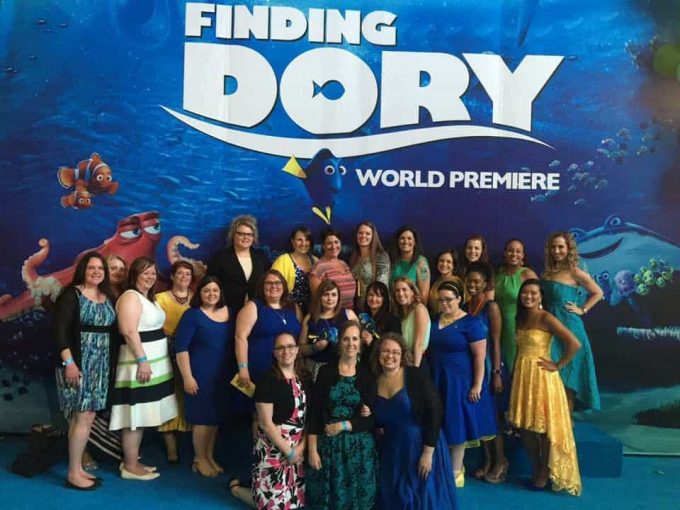 Seeing celebrities, in general, is pretty exciting for me. I don't live in a big city, so the likelihood of running into my favorite actor or actress is slim. My husband always laughs when I say I'm "checking out what's going on in the real world," and I pull up People.com. So, seeing Ellen DeGeneres and Ed O'Neill in person (and getting to talk with them - more to come later!) is nothing short of amazing in my book.

When we got to the El Capitan Theatre, I was a bit nervous and not really sure what to expect. After passing through the security checkpoint we finally stepped foot on the red (well, actually it was blue!) carpet that I'd been anticipating for so long. The way the event is structured, there is a rope line all the way down separating the celebrities and entertainment outlets from the other members of the media (us and various other attendees). They need space to to do their thing and it would be a madhouse otherwise and there wouldn't be room for photos opportunities and interviews. I was lucky enough to have a prime position when Ellen and Portia arrived for the Finding Dory world premiere. 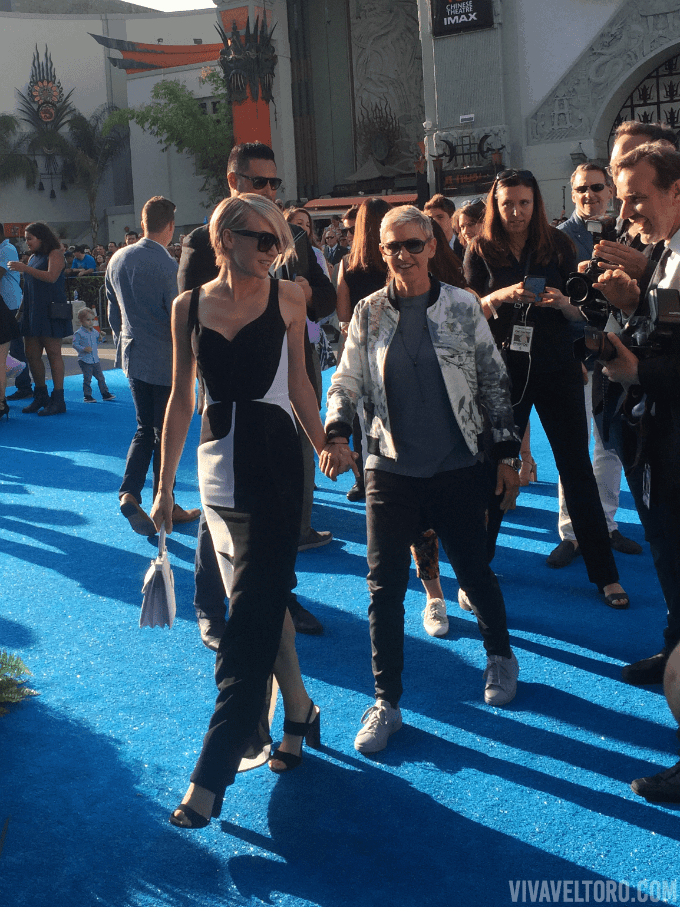 Once you strut down the carpet, you check your phone and cameras and make your way into the theater. The energy in the theater is palpable as everyone waits to see the movie that many of them have worked on for 3-4 years. It's a magical feeling to look around and count yourself as one of 1,000 or so people that are getting to see this movie before anyone else in the world. AND, to watch it amongst the incredible team that made it is just beyond anything I could have imagined.

I was and still am a huge fan of "Finding Nemo." When the movie was released to DVD in 2003, my niece was only only a tiny toddler and she quickly became obsessed with the film. In true toddler fashion, she demanded we watch it a few times per day... and so we did. Over the past 13 years, I've probably seen Finding Nemo over 100 times. That's the thing about Disney movies - they never get old and the mixture of child and adult humor is just genius. I'm happy to report that Finding Dory is no exception.

I got to see the first 33 minutes of Finding Dory at Disney Social Media Moms Celebration (Disney SMMC) in May and I feel in my bones that this movie is going to be received so well by the masses. Just the small portion I saw was endearing, funny, clever, and I could see that we were going to be taught some valuable life lessons too. We also got to hear from Producer Lindsey Collins during Disney SMMC and she shed some light on how the movie became a reality after a 13 year hiatus. As you know, Finding Nemo had a happy ending and all of the issues were resolved by the end. Except for the little details about Dory. What was in her past and how did she come to have short term memory loss.

As the trailer laid out for us (it's below, if you haven't seen it yet!), Dory (Ellen DeGeneres) gets a glimpse into her past and sets out on an adventure. Of course, Marlin (Albert Brooks) and Nemo (Hayden Rolence) have to go along since Dory has a tendency to forget pretty much everything. While you'll recognize some characters (and obviously some voices) from Finding Nemo, like Bob Peterson as Mr. Ray and Director Andrew Stanton as Crush, there are some fresh new characters that you'll instantly love, including Dory's parents Charlie and Jenny (Eugene Levy and Diane Keaton), Bailey the beluga whale (Ty Burrell), Destiny the whale shark (Kaitlin Olson); and Hank the octopus (Ed O’Neill).

As Collins told us, although Dory is friendly, funny, and generally lovable, she doesn't see herself the same way everyone else does. She never, ever mentions Nemo's small fin, and she never picks at Marlin's insecurities or worry. She doesn't see the bad in anyone, yet she's hyperaware of the flaws within her self. She's very cognizant of and constantly apologizing for her short term memory loss and it makes her doubt herself. I think that's a pretty universal concept. I think we all have a flaw that we focus on that makes us insecure and leads us down a path of self doubt. To see the characters support Dory throughout this films teaches us great lessons about perseverance and friendship.

Children and adults of all ages are going to be fully entertained throughout this 97 minute film. You'll laugh, you'll cry, and you'll fall in love with this little family of characters. Be sure to sit through the credits the full way through too! 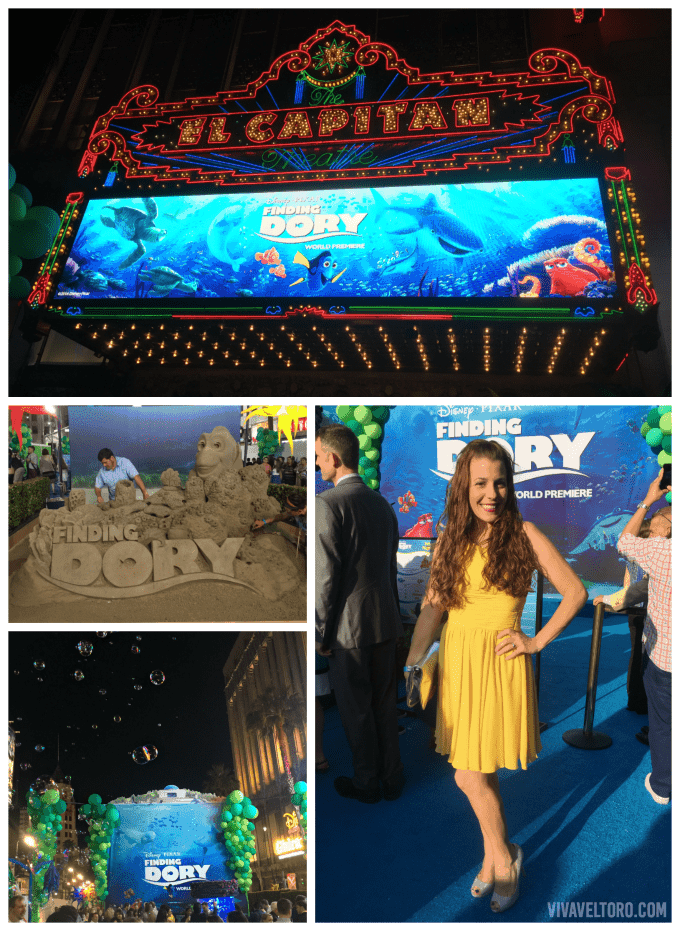 After the film, we went back out to the street, which was entirely blocked off for this event. It was filled with high energy performances, giant bubbles, a touch and feel aquarium, sand sculptures, games for kids, bounce houses, interactive photo booths, and so much more. Of course it was also a place to spot the cast and crew of Finding Dory and other celebrities in the industry. It truly was a celebration of a movie that was 13 years in the making. I was honored to be able to attend. 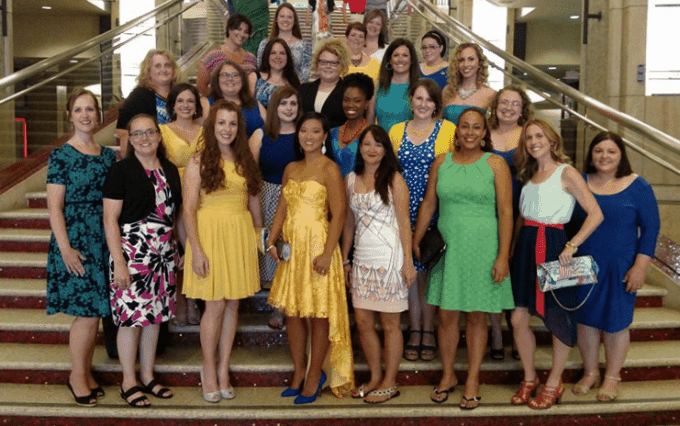 Not only did I get to have the experience of a lifetime at the Finding Dory premiere, I got to do it with friends. I was reunited with some old blogging friends and made some incredible new connections. It really was a dream come true. Thank you to Disney for proving this experience!