Rear-facing is 500% safer for children up to age two and it is also the safest option until children max out the height or weight limits of their rear-facing car seat. I've partnered with Graco for a review of the Graco Extend2Fit 3 in 1 Convertible Car Seat that allows for rear-facing up to 50 pounds and can be used forward-facing and as a booster as well! Check out our full Graco Extend2Fit review. 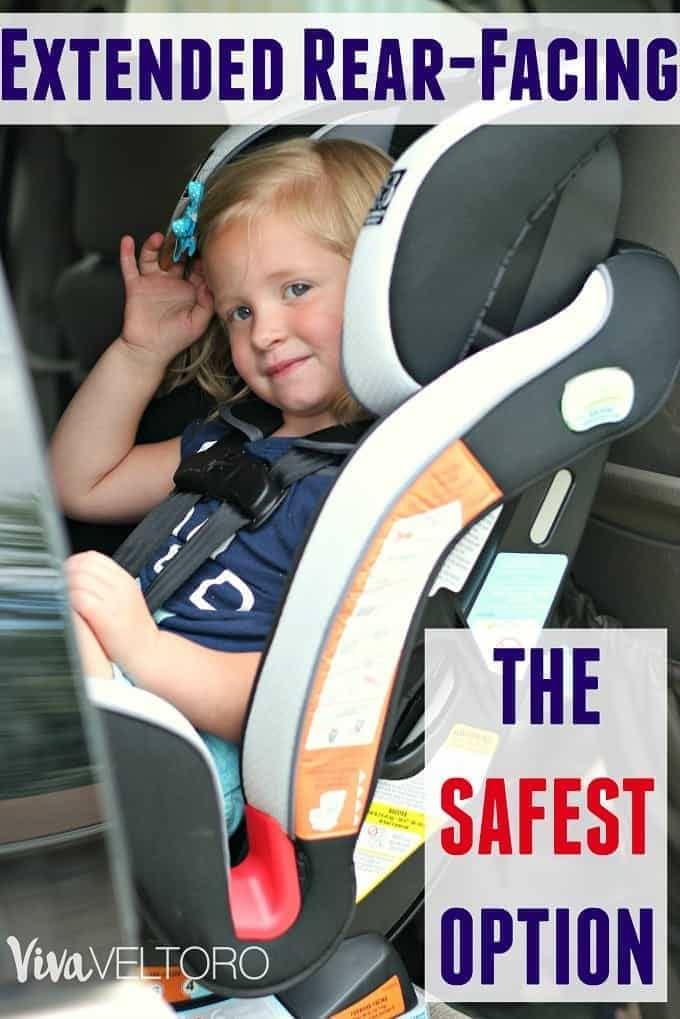 When I started doing research on car seats for my kids I found out that rear-facing is the safest for children regardless of age and I knew I wanted to find a seat that would allow them to stay rear-facing as long as possible. The AAP recommends rear-facing until at least age two or until children outgrow the rear-facing height or weight limits of their car seat. When you think about how large a toddler's head is in relation to their body (especially when compared to an adult), and that the cartilage between their vertebrae is still under-developed, it just makes sense to keep them rear-facing as long as possible. With the Graco Extend2Fit 3-in-1 Car Seat, kids can rear-face from 4 to 50 pounds! 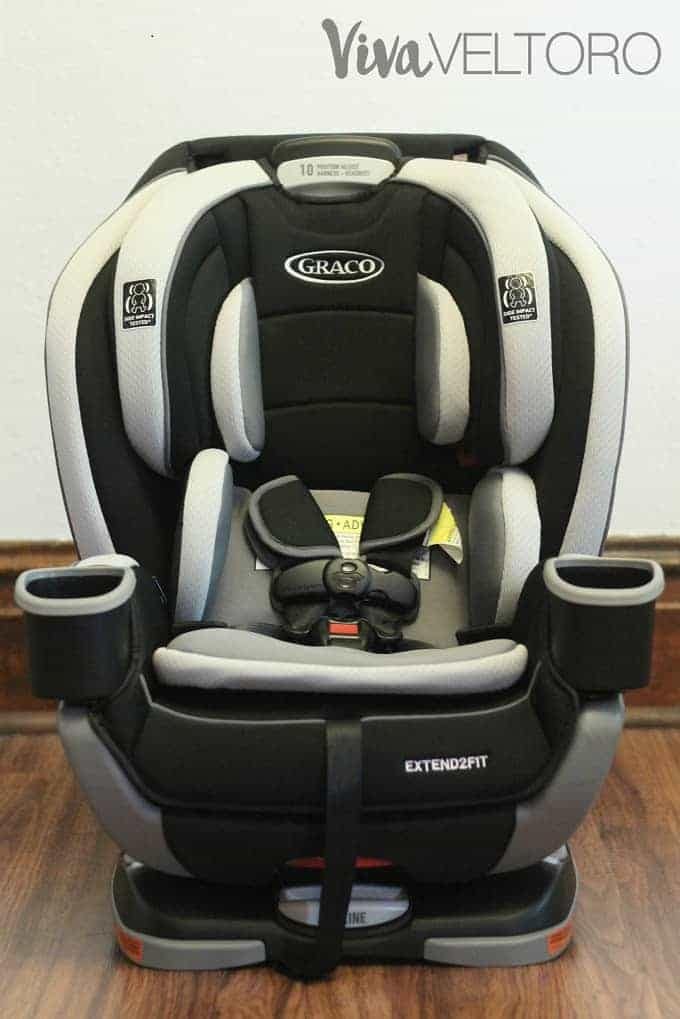 On top of the high rear-facing weight limit, the Extend2Fit 3-in-1 also boasts a 10-position headrest and children can safely rear-face until their head is 1" below the adjustment handle. I LOVE that I can use one hand to change the height of the harness and headrest with the SimplySafe™ Adjust Harness System and that I don't have to re-thread straps EVER again. 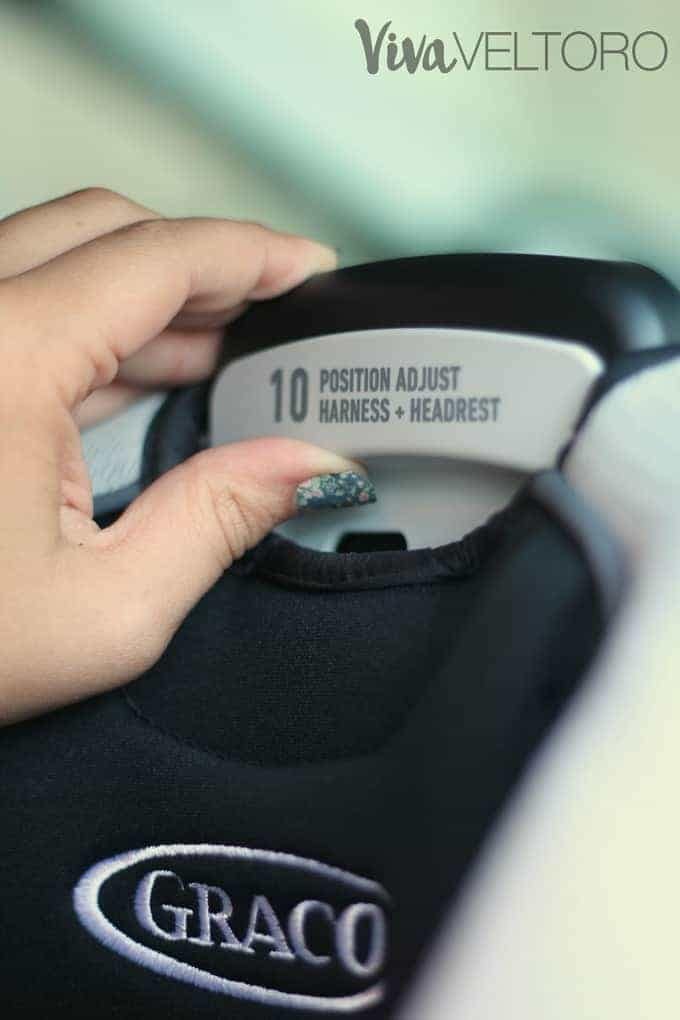 As you can see the seat gets very tall and it almost reaches the ceiling in our van. Even kids with long torsos will be able to rear-face longer with the Extend2Fit 3-in-1. Remember to make sure the straps are at or below your child's shoulders when rear-facing. 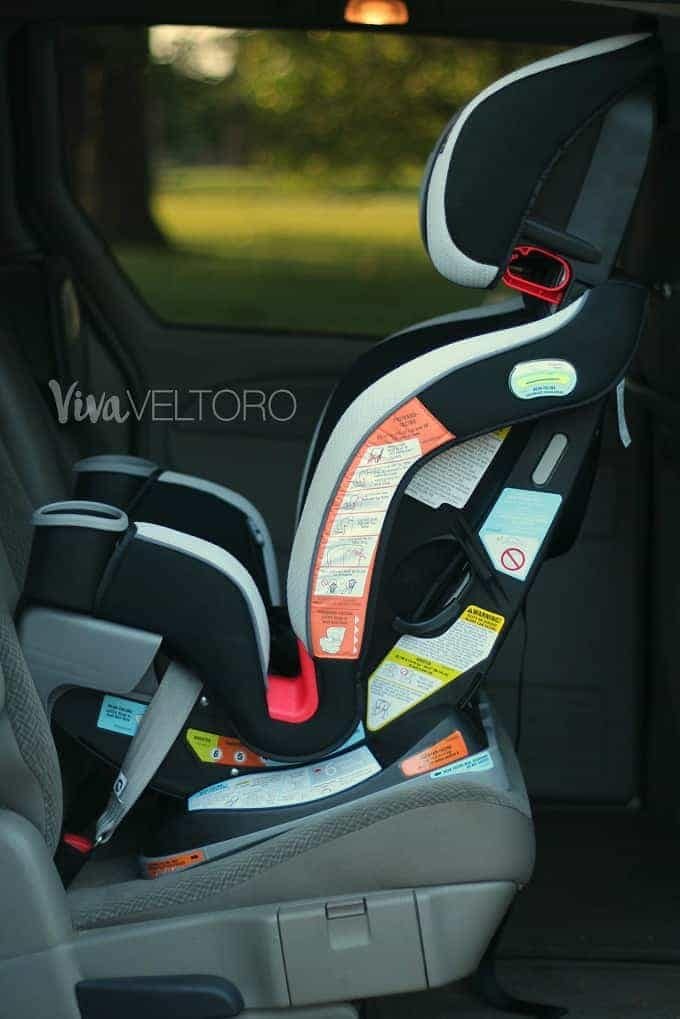 The 3-in-1 seat has six recline positions so you can determine what's most comfortable for your child. 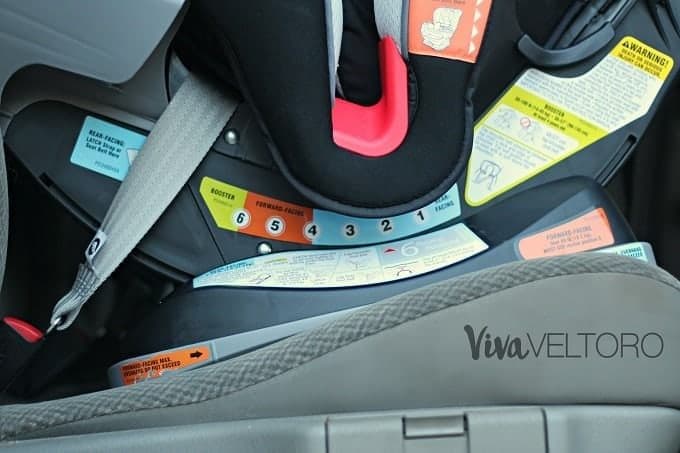 My son, who is seven months old, weighs almost 20 pounds and is 26 inches tall. I set his recline at level two because he likes to be able to see outside and it just enough reclines that he can comfortably rest his head to nap. 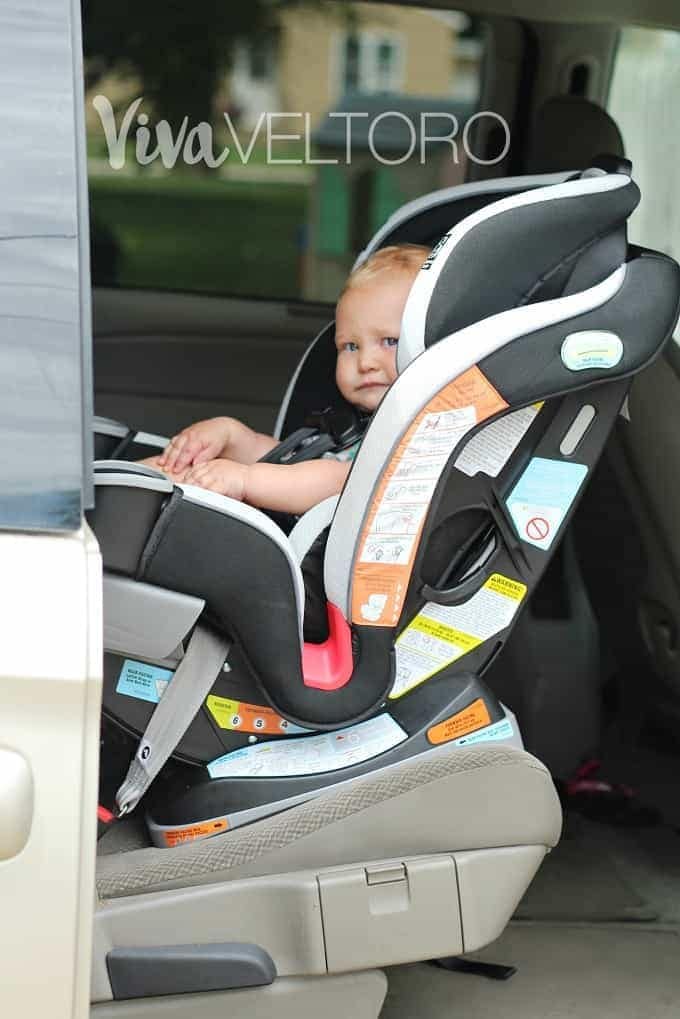 My three-year-old is 31 pounds and 37 inches tall and prefers levels three or four because she likes to be fairly upright. She's very comfortable in this car seat! 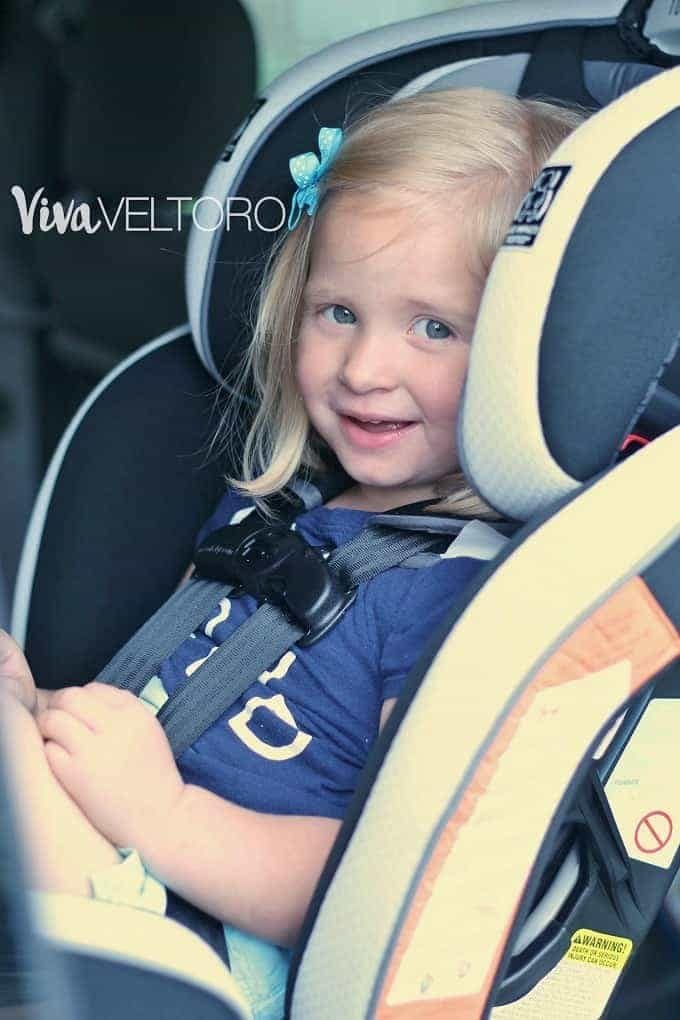 One thing that really makes this car seat stand out is the three-position extension panel that provides five additional inches of legroom while rear-facing. Kids will be able to rear-face comfortably for much longer because of this feature. 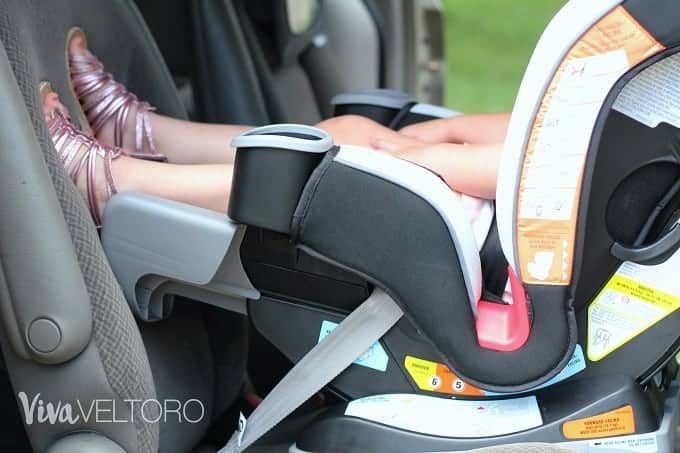 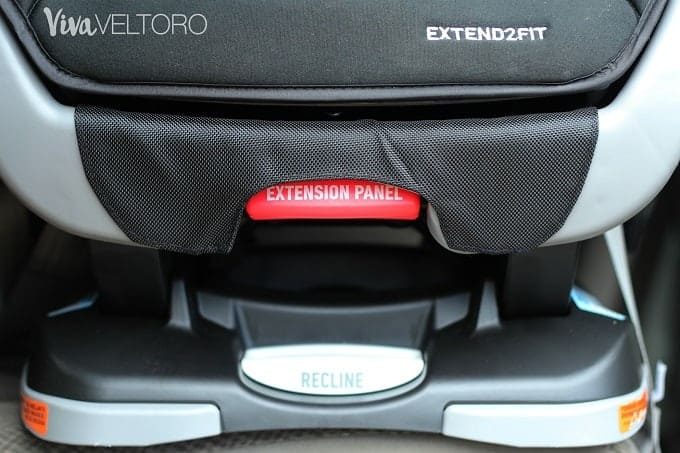 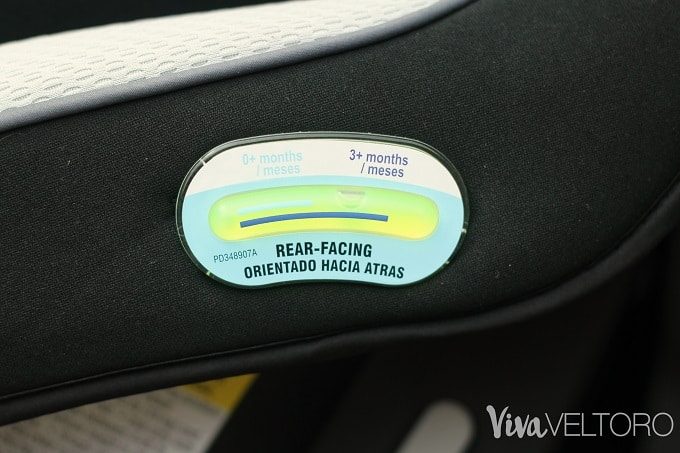 I used the InRight LATCH System when installing the Extend2Fit 3-in-1 Car Seat and it was very simple. It was so easy to get the latch clips attached and removed with their seatbelt-like button feature. Tightening the latch belt took a little muscle but I was able to secure it so that the seat didn't move more than one inch in any direction from the connection points. You can also install the car seat using a seat belt; remember to use either the seat belt or the InRight LATCH System but never both at the same time. Your child has to be less than 45 pounds to use the LATCH system while rear-facing in this car seat-if they're over 45 pounds you must use a seat belt instead (for your reference, the Extend2Fit weighs 18.5 pounds). 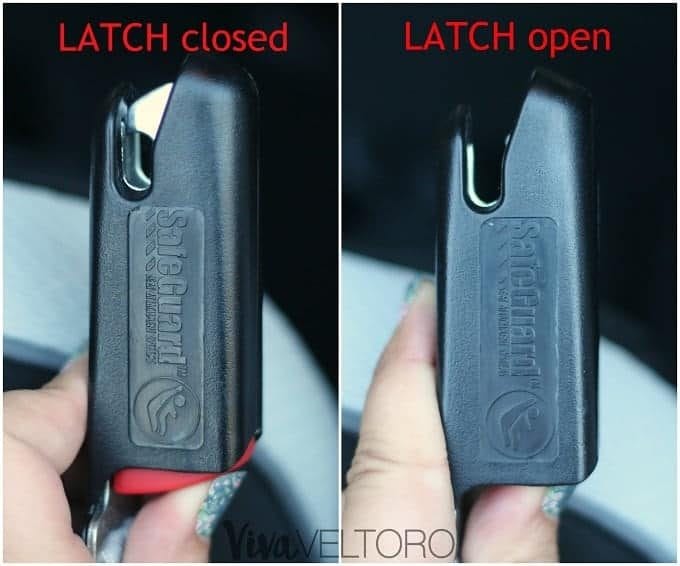 Both the head pad and the cushioned seat are easy to remove and the seat pad is machine washable. The dual cup holders are perfect for snacks or drinks and can be removed for washing if necessary. I love the Fuss Free harness storage for putting my squirmy seven-month-old into the seat. It's much easier to get his arms in and out when I can tuck the straps out of the way. 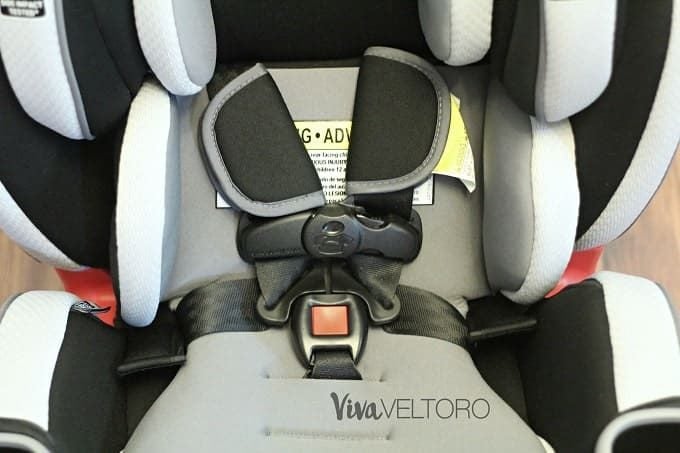 As far as the durability and safety of the seat, I feel very confident that the Graco Extend2Fit 3-in-1 is going to last until its 10-year expiration date and that it would protect my child in the event of an accident. With the steel-reinforced frame it feels very sturdy and the seat has been rigorously crash tested to meet or exceed U.S. safety standards. 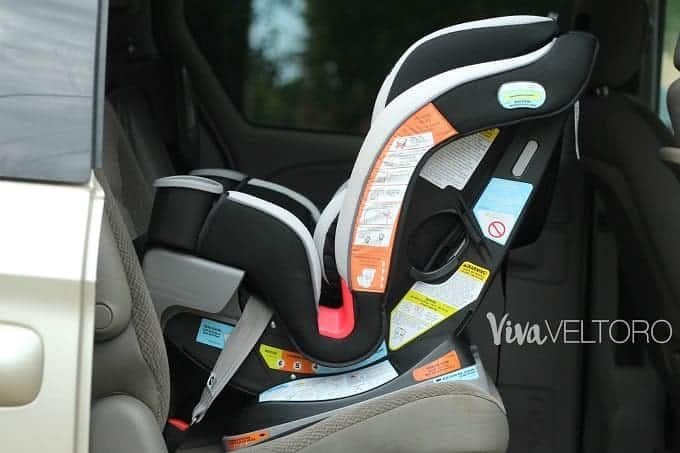 Not only is this seat great for rear-facing, the 3-in-1 capabilities mean it's also appropriate for forward-facing and it converts to a booster after that. Children can be rear-facing from 4-50 pounds, forward-facing from 22-65 pounds, and in the booster from 30-100 pounds dependent on height. That being said, the longer your child is able to rear-face the safer they'll be! I love the Garner colorway, and the seat is also available in Janey which is cream, gray, and purple.

Overall I am so impressed with this car seat. My favorite features are the extension panel, the no re-thread harness, and the high rear-facing weight limit. I also think it's amazing that you can use this car seat from birth until your child needs a booster and you can't beat the price for the quality and the amount of time you'll be using it.

Here is a quick video demo of the Graco Extend2Fit 3 in 1 Car Seat:

Get it: The Graco Extend2Fit 3-in-1 Car Seat is a Babies "R" Us Exclusive. There are other models of the Extend2Fit (that don't convert to a booster) on Amazon.com.

Disclaimer: I (Amber) received the Graco Extend2Fit 3-in-1 Car Seat free of charge to facilitate an honest review. All opinions are my own. Amazon links are affiliate links. Viva Veltoro is a parter in the Generation Graco panel to share information about the Graco brand and their products to help you #ExtendTheTrip.