Home » 7 Things to Know About Making Finding Dory According to Eugene Levy. #FindingDoryEvent

We sat down with Eugene Levy who plays Dory's dad Charlie in "Finding Dory." Find out what he had to say about the making of the movie and playing the father of a child with a disability.

Playing a loving and supportive dad isn't exactly new territory for Eugene Levy. He played a kind, understanding father in "American Pie" and plays a dad in "Schitt's Creek," but he swam into new waters of playing a Dad parenting a child with a disability as Dory's dad Charlie in Disney•Pixar's Finding Dory. We sat down with Levy the day after the Finding Dory world premiere (be sure to check it out for my full review of the film) to see what he thought about the film and the filmmaking process.

Levy told us that most of his recording sessions were solo, but one wasn't and it was quite memorable. He got to record one session with Diane Keaton, who plays Dory's mom Jenny. Levy said, "Well I recorded by myself... but, I did have one session that I worked with Diane and we were in two different cities. I was in Toronto. She was in Los Angeles and they hooked up cameras so that I could see her on a monitor in my studio and she could see me on a monitor in her studio and we were able to do the scene together, which doesn’t happen a lot when you’re doing these things because mostly you’re working by yourself. It’s quite lonely actually. But that was fun, and the great thing too was when I was working with Diane was that I was kind of mesmerized by just watching her on the monitor working, even though I was doing a scene with her. I was very aware that it was Diane Keaton behind the mic and I was fascinated, just watching the way she was working behind the microphone and then I’d have to go, 'Oh, yeah, I’ve got a line here.'"

2. Levy's favorite part of Finding Dory is the storyline (and working with Director Andrew Stanton).

We asked Levy what his favorite part of this whole experience was, and he replied, "You know it's a great story. Animated features, I've done a few of them, and it's a different way of working that doing a normal movie. Going in and not having a lot of time, and the sessions are like 3 hours and you get maybe 5 sessions over 2.5 to 3 years. It's going over the lines and giving the director the options of lines so he's got the gamut of delivery on a line from A-Z. It's odd and exciting in a way. Especially when you're working with Andrew Stanton who wrote and directed. You've got to be a great director and a psychiatrist and keep the morale up. He laughs a lot." Levy continued, "But, the story here was a great storyline. [Finding] Nemo was so kind of funny and had such a great emotional impact to it, that [Finding] Dory, when I read the script had the same emotional impact. You could feel it when you were reading it so you knew you were onto something, you know, hot."

3. The biggest challenge to playing Dory's Dad was keeping things light and charming, despite parenting a child with an impairment.

Levy told us, "The role as written was a nice dad. I've played a nice dad before. I'm doing it now on our TV show which we're shooting in Toronto, but the character was written to be a jokester in a dad sort of way. So, not necessarily really funny but he's thinking he's really funny. Sometimes embarrassingly funny."

Levy went on to talk about the idea of having a child with memory impairment and how dangerous that can be. "All these life lessons and safety precautionary things and you're saying, 'Don't do this, remember not to do this' when they can't remember from one step to the next, you're thinking, 'Wow, what's going to happen if we're never around,' which is exactly what happens in the movie. She gets lost and is gone and the fact that she is unlike any other fish, she will not remember what she was not supposed to do and what's going to happen, and that's something that a parent has to live with in this case. Any parent of a child with any kind of impairment goes through things that normal parents don’t necessarily have to deal with on a day to day. So that was a big part of it too and still trying to keep everything kind of light and charming and funny which is the brilliance of the script that Andrew came up with because it’s all packaged in one. You have all these emotions kind of snowballing through the movie and you’re kind of laughing and crying and feeling and touching and it’s great. It really is."

4. Parenting a child with a disability takes an incredible amount of patience and perseverance.

Further expanding upon the theme of parenting, we asked if Levy thought the style of parenting that Dory's parents used in the film would give extra hope or advice or support to parents who have children with disabilities. Levy said, "I hope so, but I really think that parents who have kids with disabilities - I think by in large they kind of know what they have to do and how to do it because it takes an incredible amount of patience and perseverance. A couple of friends have autistic kids and I know how much energy it actually takes to get through a day or even part of a day. If you’re not at all familiar with that you would have no idea how much energy and perseverance and patience that it takes." 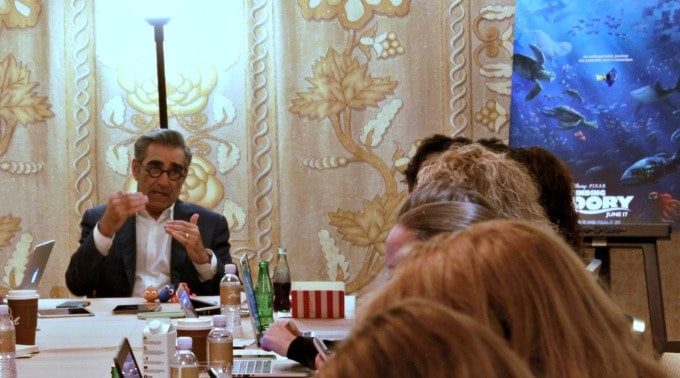 5. Little Dory was his favorite character (and probably will be yours too!).

Levy said it's hard to pinpoint one just one great character, but he did say, "The little Dory is, I think, my favorite character because when I first heard that voice I honestly I got so emotional and this is one of the recording sessions. They showed a little section of the animation which hadn’t been fully fleshed out yet, but that’s the first time I heard the voice and I almost burst out crying. I’ve never heard anything so sweet in all my life. I said, 'Where did you get this voice?" And, it turns out it was Lindsey's [Producer Lindsey Collins] daughter. Her daughter who came in to do a guide track for the animators and they just heard her voice and loved it so much they said, "well, this is the voice." So that character, every time I hear that voice I just, I wanna hear more."

Check out all the sweetness of Little Dory here:

6. Not just anyone can ad-lib with Disney•Pixar.

Since we talked with Ellen DeGeneres earlier that morning, we knew that she was able to ad-lib and add some lines here and there throughout the movie. We asked Levy if he had the same experience. He laughed and said, "Ellen’s the star of the movie. She can do whatever she wants. You do have to take a bit of a cue from the director. It’s not like you can just go in there and start playing around with the script. They work very hard on putting together a great script so there’s nothing you necessarily need to be improvising, but if in the course of doing the voice work the director will let you know, "Just go crazy with this or just do whatever you want." He’ll kind of let you know where the sections are that he feels a little improvising might be beneficial. But just to go off on your own on the script is not something that I would be comfortable doing. But there were times every now and then and it is fun when it works."

7. The most impressive things about Finding Dory are the brilliance of the storyline and the beautiful animation.

We got to watch the world premiere of Finding Dory along with Levy the night before and we asked him about what it was like to see the movie for the first time. Levy told us that when you're reading scripts 3 years prior, and in the recording studio you get chunks of what you're involved in but not necessarily the stuff you're not involved with, so you're just focused on doing what you're doing. But, when he saw it in person he said, "The thing that impressed me the most about it was the brilliance of the entire project and how beautiful the animation is."

He went on to discuss the storyline and how the movie evolves into an action movie that you get completely caught up in. Levy said, "What a great, fantastic job they did, and just when you think you’ve got a handle on where the story’s going and then it just kind of opens up and then it opens up some more and just when you think you’re bringing it home it’s opening up some more and then it gets into such an adventure. It turns into an action movie at some point and it’s so incredibly real. That animation is so brilliant... I looked at a shot of the ocean going, 'I wonder, did they actually shoot the ocean?' because you’re seeing a million actual white caps and waves. It’s just incredible animation, and the story just keeps going and going and going and just picks up energy and picks up the pace and wow, you get caught up in it." 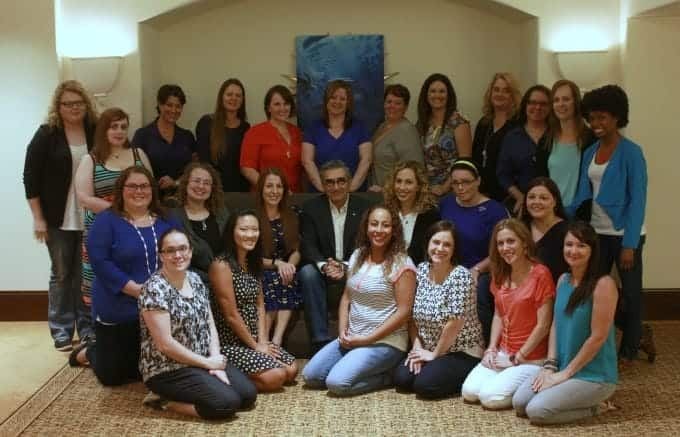 Special thanks to Sara of Budget Savvy Diva for the pictures for this post.