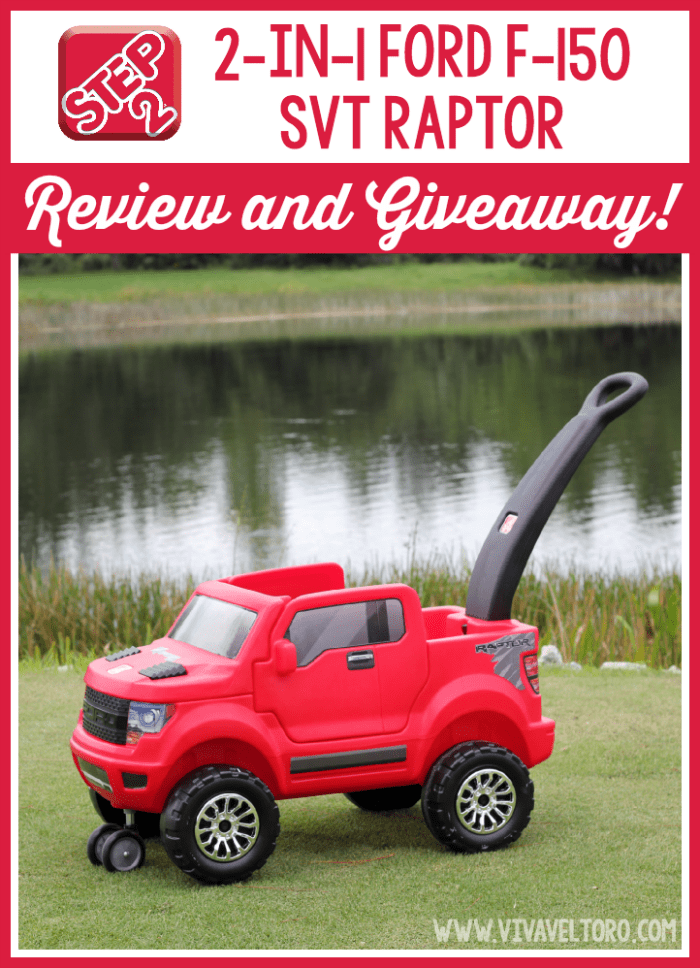 Disclosure: As a Step2 Ambassador, I received the 2-in-1 Ford® F-150 SVT Raptor at no cost to facilitate this review.

My little guy has a serious "thing" for trucks lately. He gets so excited every time he sees them drive by, and I knew when I saw the brand new Step2 2-in-1 Ford F-150 SVT Raptor at Step2 Headquarters in August, that he'd go NUTS for it... and I was right! When the box arrived on our doorstep he literally hugged it. I really hoped he was going to love it, and I was so excited to assemble it so he could start cruising around in his new truck. 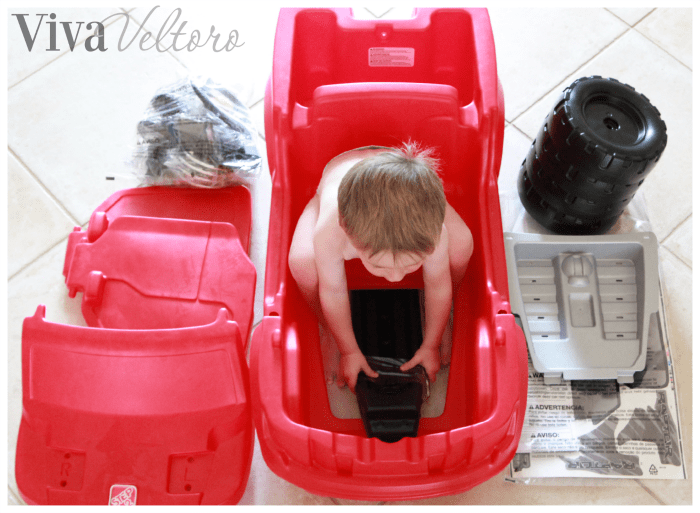 We planned to assemble his new ride during nap time, but someone woke up early - I think he knew we unboxed the Raptor. As you can see, he couldn't wait to hop in! Assembly was a little harder than I anticipated, and the whole process took us maybe 30-40 minutes. We encountered a little difficulty attaching the cap on the metal rod that holds the front swivel wheel in place, but once we finally got that in place, we cruised right along with the rest of the assembly process. As soon as we were done, my toddler grabbed his socks and shoes and said "Let's go outside!". This is big news since he hadn't really put together any sentences up until this point. 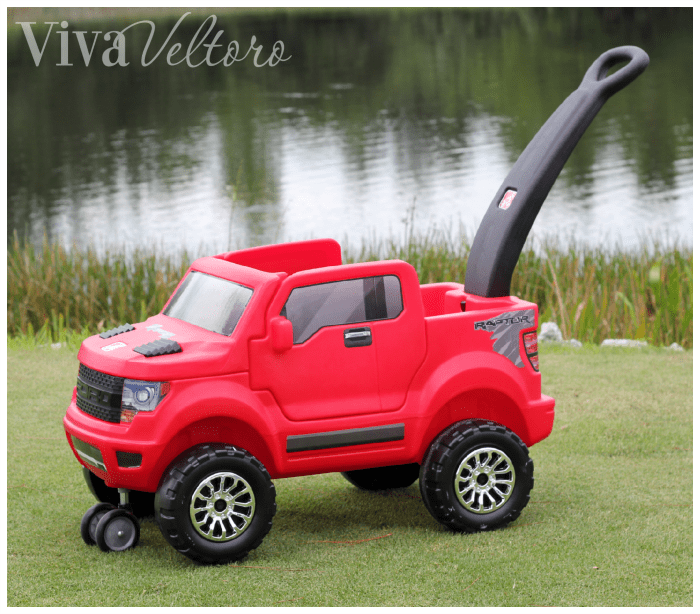 Isn't she a beauty?! This rugged looking Ford F-150 SVT Raptor ride-on looks so similar to the real thing and is packed with fun, realistic features. This truck was designed for ages 1.5 and up (with a maximum weight of 50 pounds), and will grow with your child because it's got a 2-in-1 design. It transitions from a push buggy (thanks to it's removable push handle and floor board) to a kid powered ride-on. I absolutely love this feature! Previously, we had a little car that our son was able to ride in, but there was no way for us to push it without leaning over awkwardly while walking. This push handle is a dream! Currently, our toddler likes to be independent and doesn't want to be in a stroller for walks. Unfortunately, he can't last as long as he thinks he can and gets overheated in the Florida heat and humidity. Now, we just take the Step2 2-in-1 Ford F-150 SVT Raptor with us, and push it along until he gets tired, then he climbs right in without a fight. 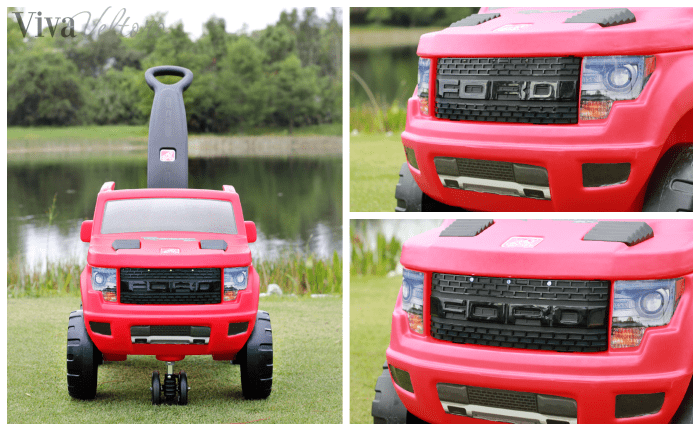 Now, let's look at all the fun features! The 2-in-1 Ford F-150 SVT Raptor has a super awesome front grill that displays the FORD name and it even has working LED lights. There's a hidden button integrated into the grill to turn the lights on and off and my little guy just will not tolerate them being turned off. He's fascinated by them.

The Raptor has rugged looking plastic wheels with shiny "hubcaps" that give it a stylish look. Another feature that I absolutely love on this truck is the front swivel wheel. Thanks to this wheel, you get full 360-degree turning ability. Your little one isn't limited to just going forward and backward, they can cruise all over.

This truck also has two working doors with latches to keep your little one safely inside. I love that my little guy can climb in and out on either side and that the door latches keep the doors securely shut when we're out on our walks.

The steering wheel turns a full 360 degrees and has a honking horn that my toddler loves to honk when cars go by in our neighborhood. It's really fun for him to think he's driving since we can move the truck according to which way he turns the steering wheel thanks to the push handle on the back. 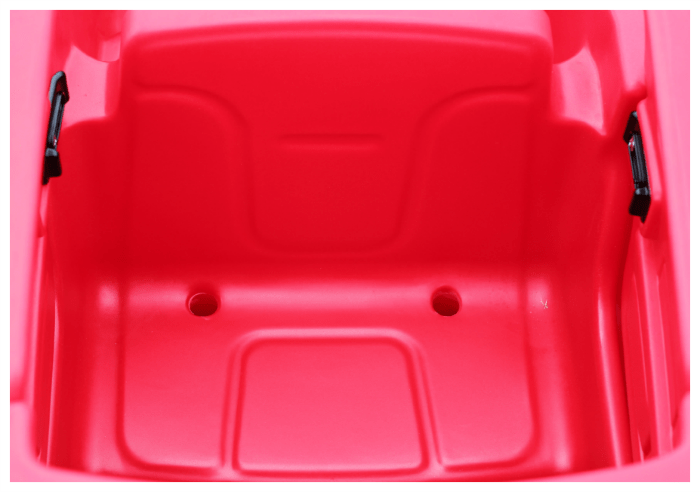 The seat in the Raptor is seemingly comfortable and come equipped with drainage holes in case your Raptor gets left out in the rain. Right behind the seat is a neat storage area with two cup holders and space for all sorts of toys, or mom and dad's essentials while on walks. 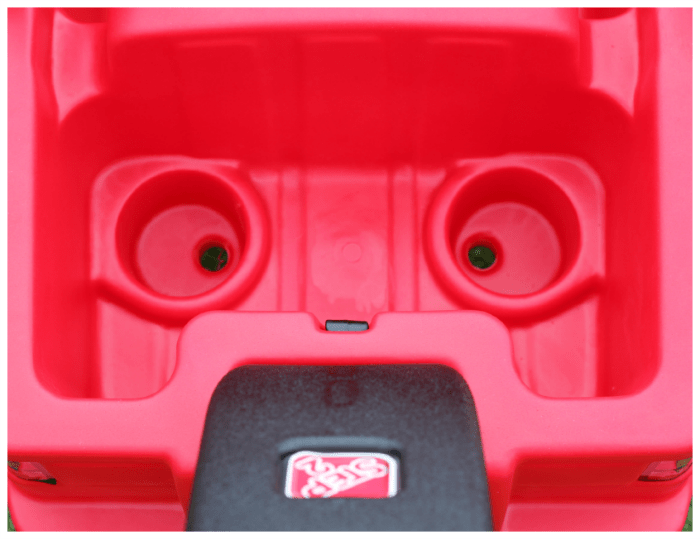 This truck has provided us with hours of entertainment so far. It really transitions nicely from an outdoor toy to an indoor toy too. My little guy likes to sit inside of his Raptor to watch movies at his very own "drive-in", just as much as he likes pushing it around outside.  Just for size comparison, my toddler is 27 months, 30 pounds, and 36.5 inches tall in these photos. The Raptor measures 22.00 inches H by 20.50 inches W by 38.00 inches D.

One thing's for sure, the Step2 2-in-1 Ford F-150 SVT Raptor is Wubba tested and Wubba approved! This toy is fun, durable, and a keeper for sure!

Here's a short video of me chatting about all the neat features of
the Step2 2-in-1 Ford F-150 SVT Raptor Ride-On:

Do you think your child would love the new Step2 2-in-1 Ford F-150 SVT Raptor?
Well, Step2 is offering one lucky reader the chance to WIN one!

CLICK HERE to be taken to the giveaway entry form!
Good luck everyone!

Disclosure: As a Step2 Ambassador I've partnered with Step2 for this review. I received this product to facilitate a review and form an honest opinion.