Home » How to Make a Jessie Toy Story Costume. No Sewing Required!

Yaa-haw cowboy! If you're looking for the Jessie Toy Story costume, you've come to the right place. I searched for the perfect costume for my toddler but couldn't find what I was looking for, so I made my own. I'm going to show you how to make a no-sew DIY Jessie costume for Halloween or any old time! 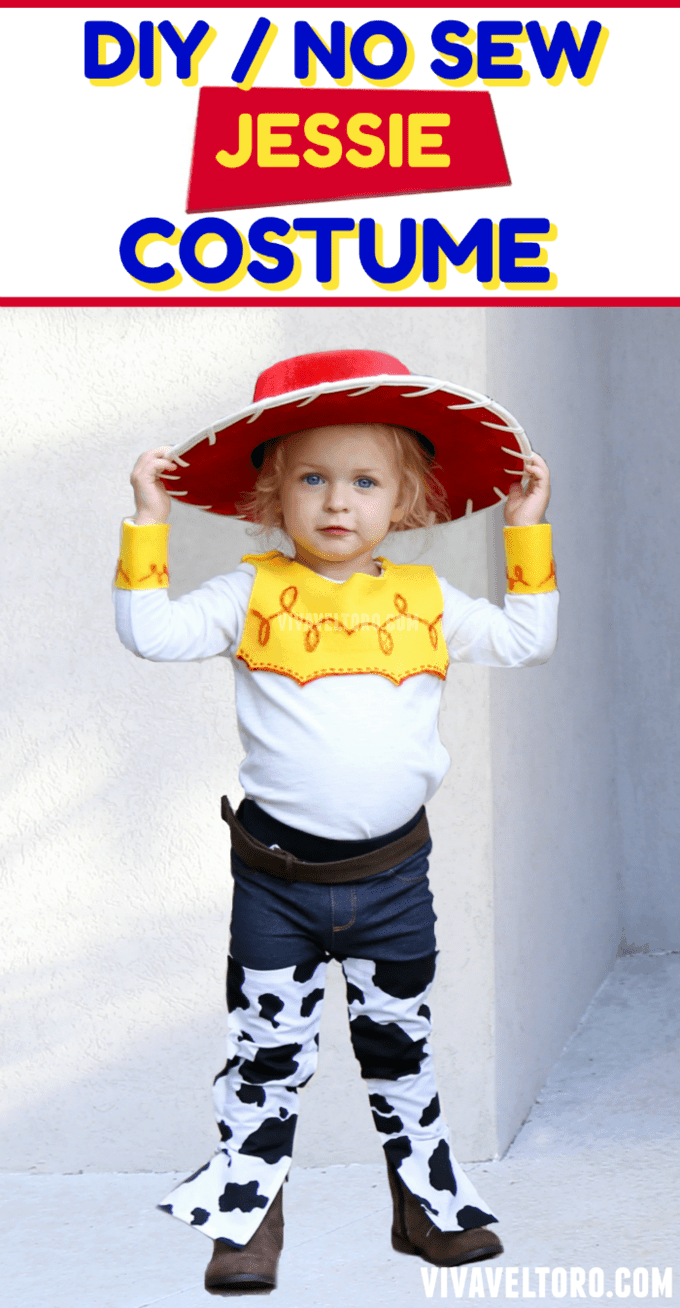 When my son told me he wanted to be Woody for Halloween, I knew his little sister would just have to have a Jessie from Toy Story costume to match. I partnered with JCPenney for all our Halloween needs and was able to get the foundations for all of our Halloween costumes at amazing price points. 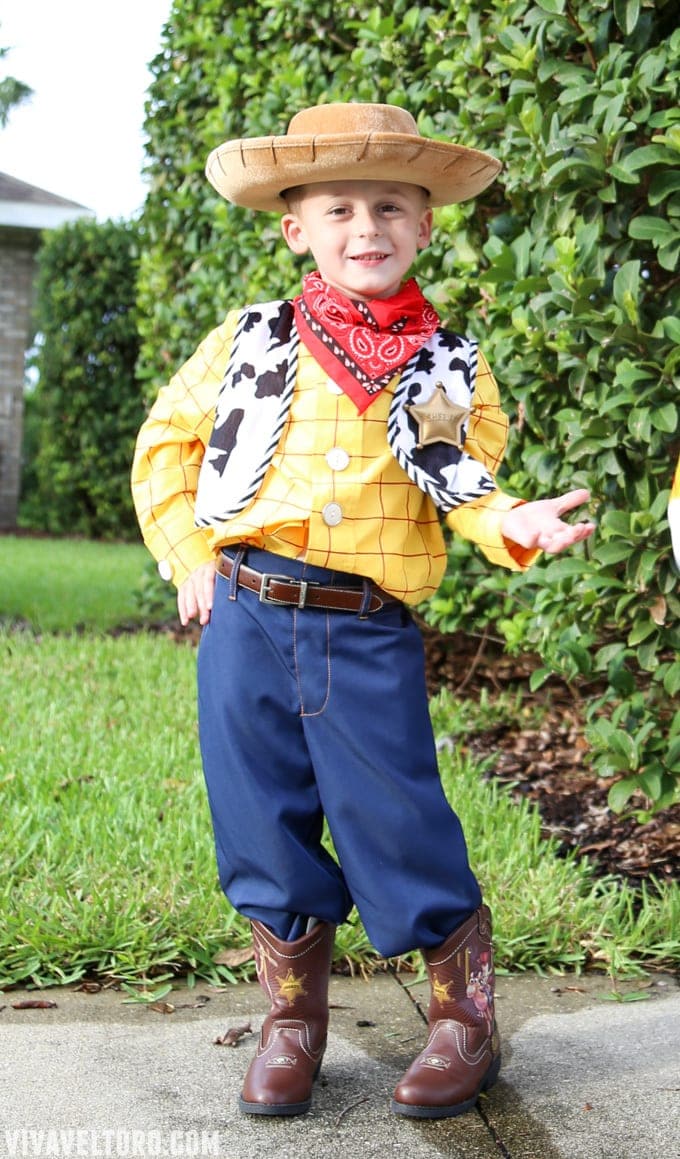 As we were walking through JCPenney, my son spotted this Disney Toy Story Dress Up Woody Costume costume and practically begged for it. He's a huge Toy Story fan, so of course, I said yes. I was even able to find official Disney Toy Story boots and a matching Woody hat on JCPenney.com. Since all of these items were officially licensed by Disney, they're great quality, and since I got them at JCPenny, the price was right! I got his 5-piece costume (with a vest, badge, and neckerchief) on sale for only $23. The Disney Toy Story II Cowboy Boots were only $45 (which was way cheaper than competitors) and I snagged the hat for only $22.99. The hat is probably my favorite part. Unlike cheap cowboy hats we've had in the past, this hat is very structured and is made so well. I know it will last for years of imaginative play. 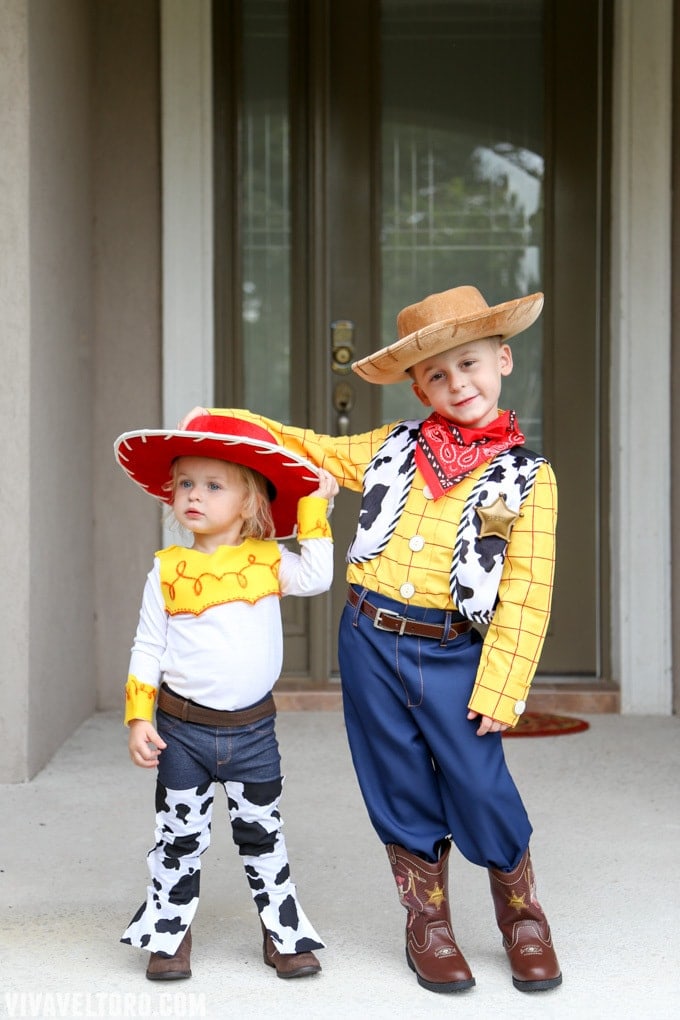 How to Make a Jessie Toy Story Costume

JCPenney has an assortment of Toy Story costumes for the whole family, but I wasn't sure our 2-year-old would fill out the toddler Jessie costume they had available online. After looking through the toddler clothing, I decided it would be more fun to make her a Jessie from Toy Story costume myself out of everyday clothing a few supplies from the craft store. 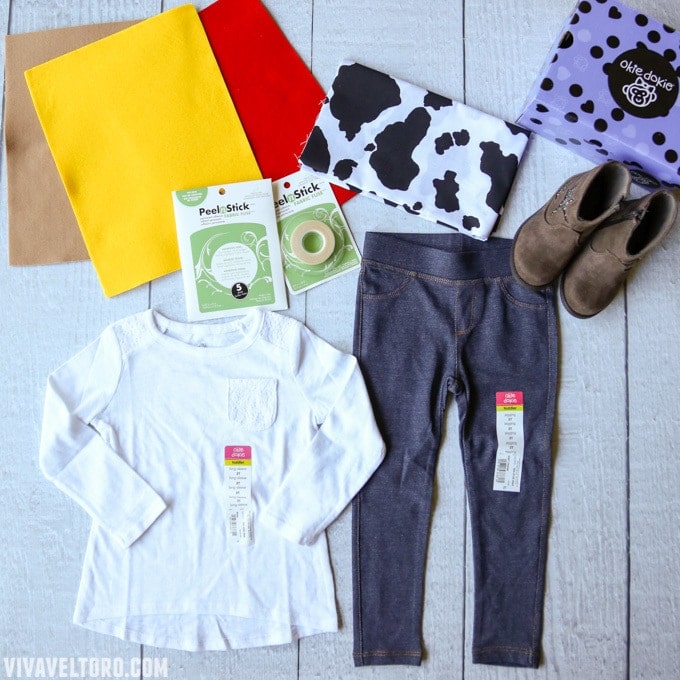 I grabbed a pair of Okie Dokie jeggings in size 2T and a white Okie Dokie long sleeve white t-shirt for only $2.49 each during a sale. I mean, HOW can you beat those price points?! I got an adorable pair of Okie Dokie Moselle Girls Cowboy Boots for only $13.49 after sales and coupons. From the craft store, I bought ½ yard of cow print fabric (which cost $2.65, and I could have actually gotten ¼ yard), a roll of peel and stick permanent advesive double-sided tape, and some red and yellow felt. I had also bought a piece of brown felt in case I wanted to craft a belt, but I decided against that later on since I found a belt in her big brother's closet. 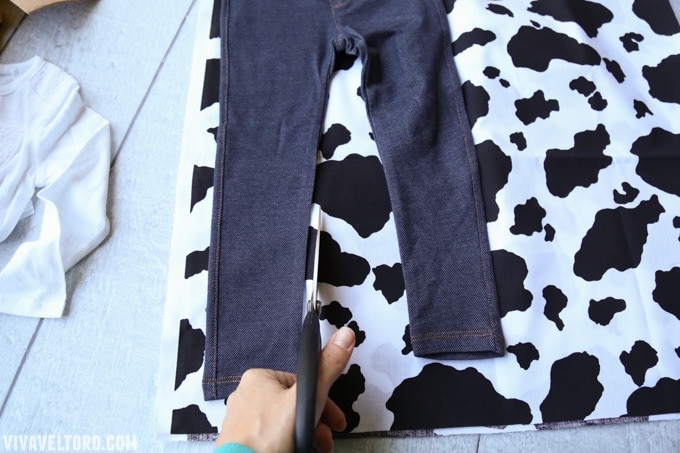 Since I didn't want to sew this costume, I purchased a roll of permanent adhesive double-sided tape to make the "chaps" and attach them to the jeggings, and to attach the yellow detailing to the shirt. I started by making the chaps. I simply laid the jeggings on top of the fabric and cut around them, allowing for a ½ inch "seam" allowance that I'd fold over using the tape to make a clean edge. 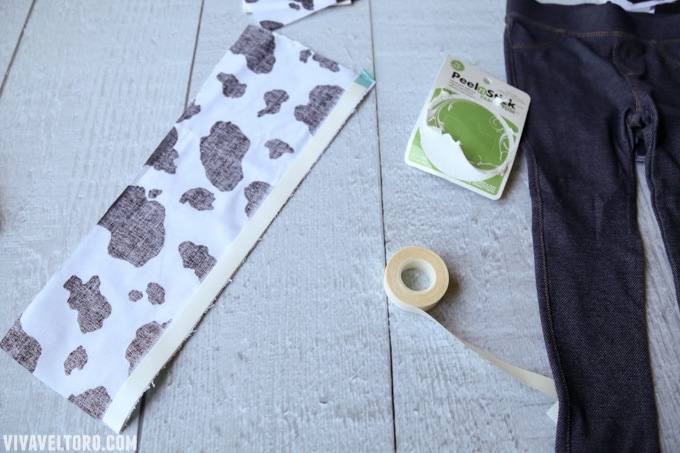 This tape works wonders! It's so easy to use and really sticks. After I had all four sides folded over and "hemmed," I made a piece for the other side. 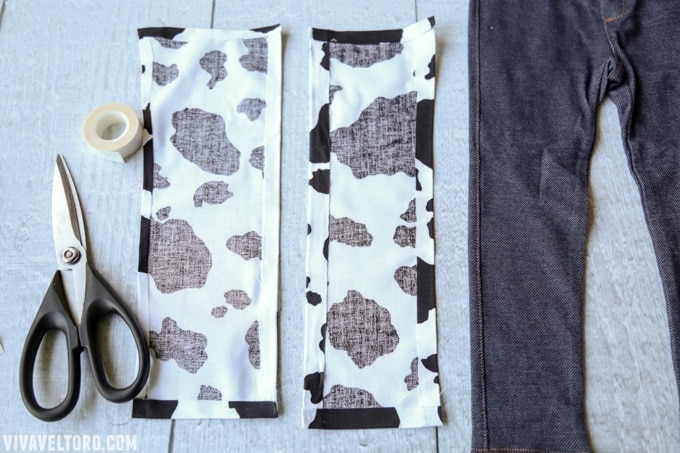 Once you have your two matching pieces, you're ready to attach them to your jeggings. 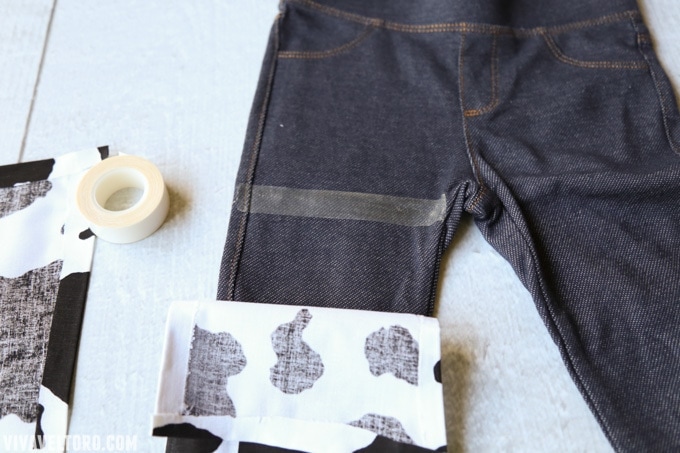 I attached the chaps-looking fabric to the jeggings using the same tape. When you're attaching each leg of the chaps to the front of the jeggings, be sure to leave about 4-5 inches of space at the bottom so they'll cover the boots and have a swing effect. 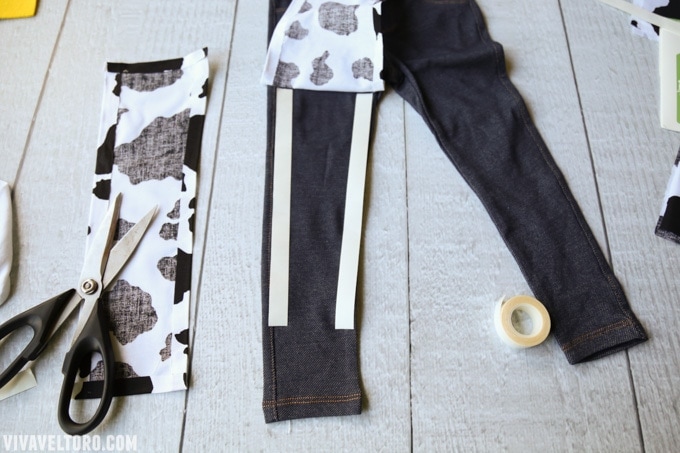 Once you've left about 4 inches of space at the bottom, just stick the chaps-looking fabric onto the front of the pants. 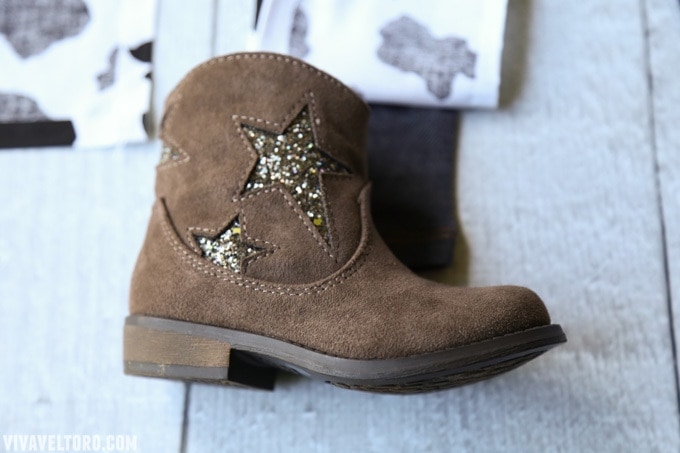 Seriously, how cute are these boots?! 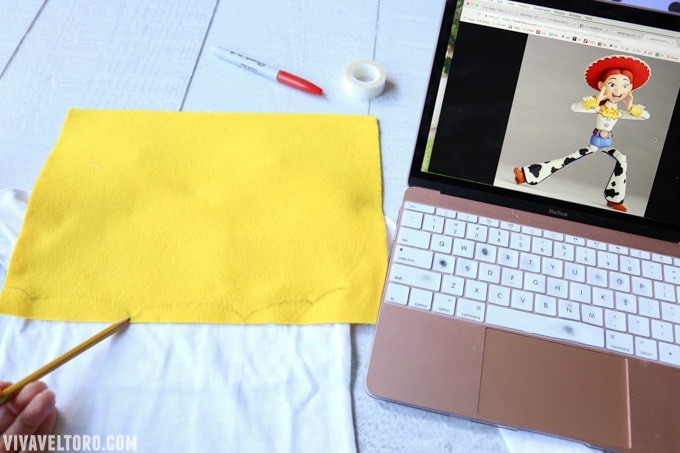 Once I finished the pants, I started on the top. It's helpful to have a photo of Jessie from Toy Story close by so you can recreate the same effect. I took a piece of yellow felt and laid it on top of the shirt and decided how long I wanted it to be. Since the shirt I bought had a little pocket and some lace detailing, I knew I wanted the piece of felt to cover that. I took a pencil and free-handed the design of Jessie's shirt, then cut it out. 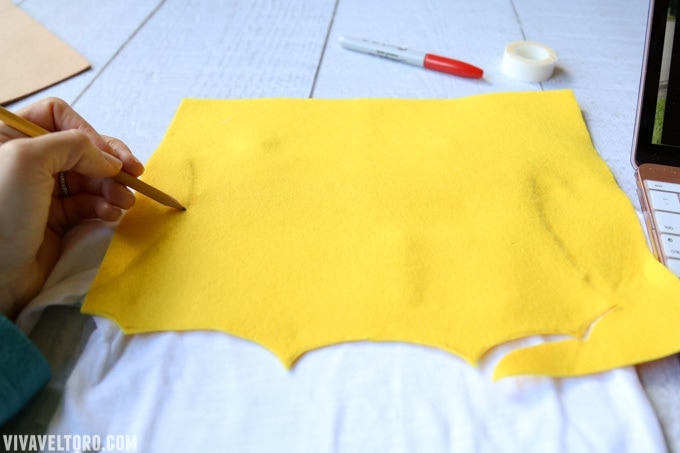 I did the same thing for the sleeves and the neckline. 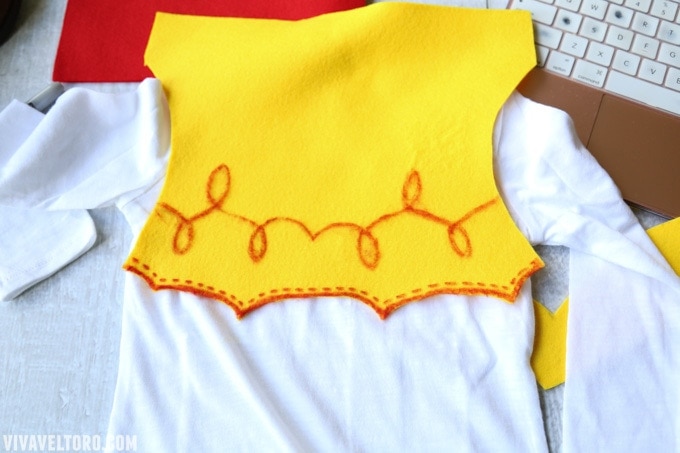 After I had the rough cutout done, I took a red permanent marker and traced the outline and free-handed the design onto the felt. Remember, it doesn't need to be perfect since this is just a toddler's Halloween costume. After I had this part done, I trimmed the felt to cover the shoulders and front neckline. 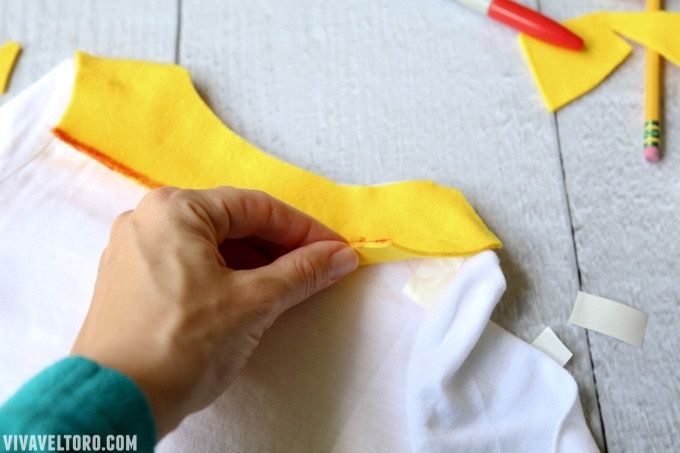 I did the same thing for the back. You'll need to do this in two separate pieces; one for the front and one for the back, taping them down to meet at the shoulder seam. Otherwise, your child won't be able to get the shirt on since felt doesn't stretch. 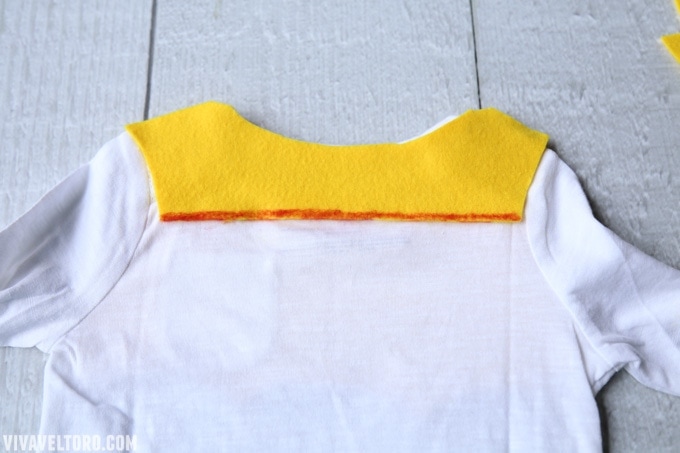 I then finished up by adding a little more felt at the bottom of the sleeves to make a faux-cuff. Again, I just free-handed the design and attach the felt with the double-sided permanent adhesive tape. 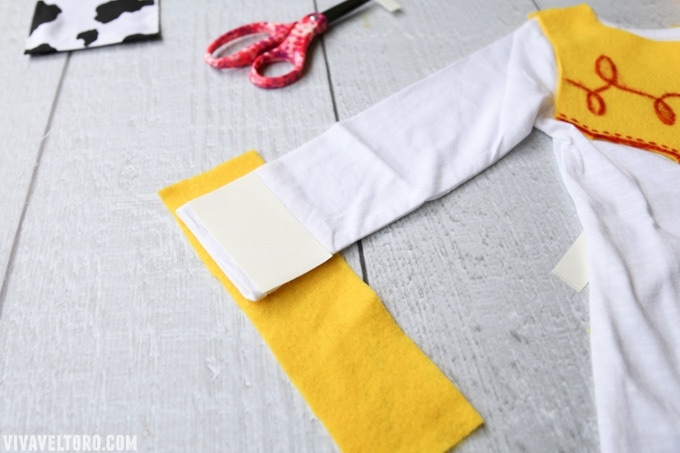 You can apply this in one piece because he or she should be able to get their hand through the hole if the felt isn't super tight. After I had the felt attached, I trimmed the excess on the side to form a little point like a real cuff. 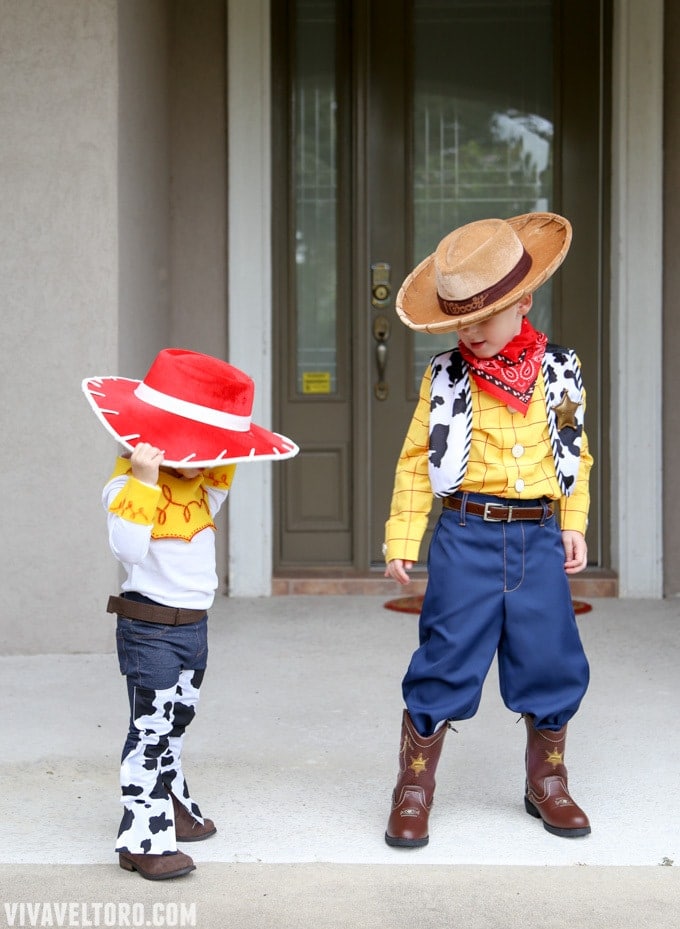 I added a little canvas belt that I found in the closet and pinned it in place since it was a little big. I knew she's fuss with a buckle, so this seemed like the next best thing. I also got her an official Toy Story Jessie hat from JCPenney.com and it is perfect! 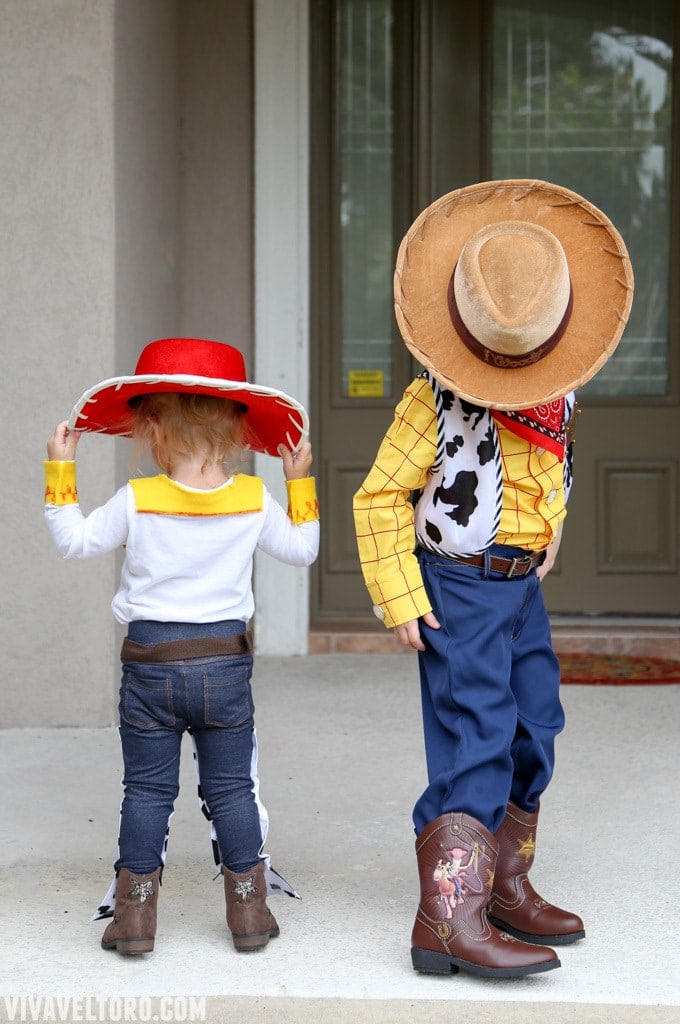 I have to say, I love the way their costumes turned out and the fact that I was able to get everything I needed at JCPenney and a quick trip to the craft store. Their costumes were affordable and are such great quality. I know these costume, especially the boots and hats, are going to get used a ton, long after Halloween is over. 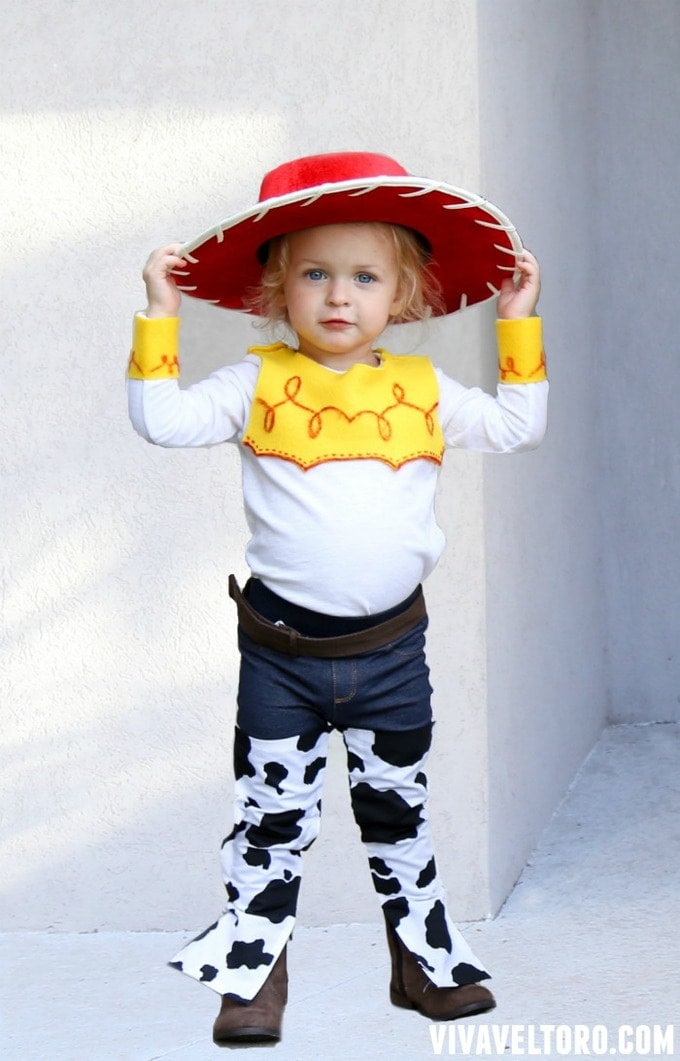 Of course, we couldn't let the kids have all the fun! Be sure to check back for my DIY Mr. and Mrs. Potato Head costume idea! We're going to have quite the family Toy Story Halloween costume this year!

Check out my Facebook live video
for this Jessie Toy Story costume:

Have you gotten your Halloween costumes yet?
What will your kids be this year?

Disclosure: Thank you to JCPenney for sponsoring this #SoWorthIt post! All opinions are 100% my own.