Home » 5 tricks to get your toddler to eat healthy foods .... without the fight! 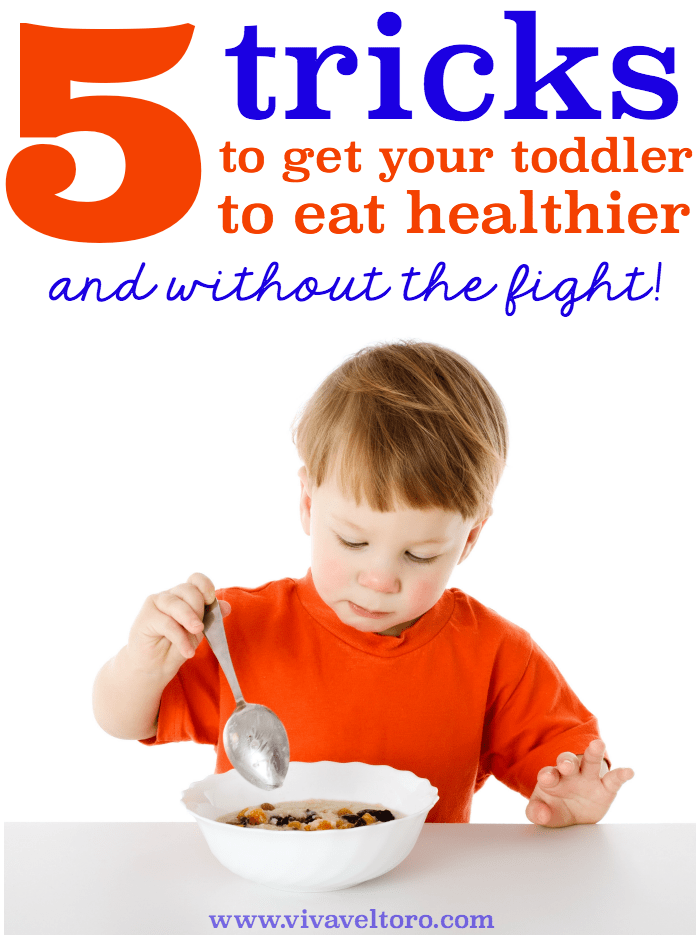 “I can’t argue with crazy!” I yelled, sitting on the bathroom floor in tears. It wasn’t my finest moment as a parent, I’ll tell you that. But how else does a parent feel after taking half an hour to explain to their toddler that a human can’t refuse to poop?

During the honeymoon period between the rigors of breastfeeding and the iron-clad opinions of a two-year old, my daughter would eat anything and everything. But slowly she learned the word no, and from there I had to get creative if I wanted her eating the high-fiber foods I knew she needed to avoid tears in the bathroom – hers or mine.

Here are my top five EASIEST ideas for incorporating more fiber and other nutrients into your children’s diets.

1. GIANT RAISINS: Thanks to my 90-year-old grandfather, I know that “prunes keep you regular.” So while at the grocery store one day, I plucked a container of Sunsweet prunes from the shelf and threw them in the cart. When I got home and opened the container, my first thought was, “These look like giant raisins.” A story sprang to mind. I easily took off the outer plastic wrapping, to reveal the plain white container underneath. Sharpie marker in hand, I wrote in big bold letters, “Giant Raisins.” Then, I turned to my daughter and told her a story about how a Giant named Jim had given me these raisins from the land of Giants. They’d heard she’d been a good girl and wanted to give her a special gift to help her grow up big and strong. Like any good story-teller, I embellished and added details, and I must have done a pretty good job because she gobbled up both the story and the prunes and has continued to do so almost two years later.

2. MAGIC SPRINKLES: As a first-time mom, one of the books that I loved/hated was Super Baby Food by Ruth Yaron. The book taught me so much, but it also made me feel guilty for not making homemade porridge in batches large enough to feed small armies. I needed suggestions that were easy, quick, and didn’t require extra preparation. One such idea was to add wheat germ to slippery fruits, such as peaches or kiwi, so kids can grab them more easily. Done. I bought a jar and dutifully sprinkled it on a plate of kiwi for my daughter. “What’s this?” she asked. I balked. I was fairly certain the phrase “wheat germ” would sound gross even to her young ears. “Magic sprinkles,” I said with cheer. (In my head I gave my lying self a high-five.) Eventually, she asked where the sprinkles came from. Publix didn’t sound nearly exciting enough, so I invented another story, this time featuring a Blue Fairy who personally delivered the sprinkles to our door one night. Incidentally, flax seed is another optional “magic sprinkle.”

4. BROWN BEAR, BROWN BEAR: Refried beans are healthy, full of fiber, and can also be bought pre-made. But lumped on a plate? Blah. Enter: the bear shaped cookie cutter. Simply place the cutter on the plate, spoon and smooth the beans into the shape, remove the cutter, and you are left with an adorable-looking brown bear. If you’ve got the time or energy (re: finished your second cup of coffee), you can add blueberry eyes, strawberry lips, or whatever wacky, edible accessories you think your kid will eat. I used this same technique to make a Banana-saurus for my son.

5. FROZEN PEAS: (This might blow your mind.) Buy frozen peas at the store. At home, open the bag and pour onto your kid’s plate. Watch them eat the peas. It’s AMAZING.

Selfishly, these ideas have been a stress-free way of avoiding the “Does my kid get enough fiber and/or veggies?” guilt trip. More importantly, my kids enjoy eating foods I know will help them grown up big and strong. And a little magic never hurts anyone either, right?