This post was sponsored by Duracell as part of an Influencer Activation for Influence Central.

WowWee has not one, but two of the hottest toys this holiday season, and we were lucky to get our hands on both! Powered by Duracell and available at Toys'R Us, these toys deserve a high place on your holiday shopping list this year. We are thrilled about showing you why they are so fantastic! 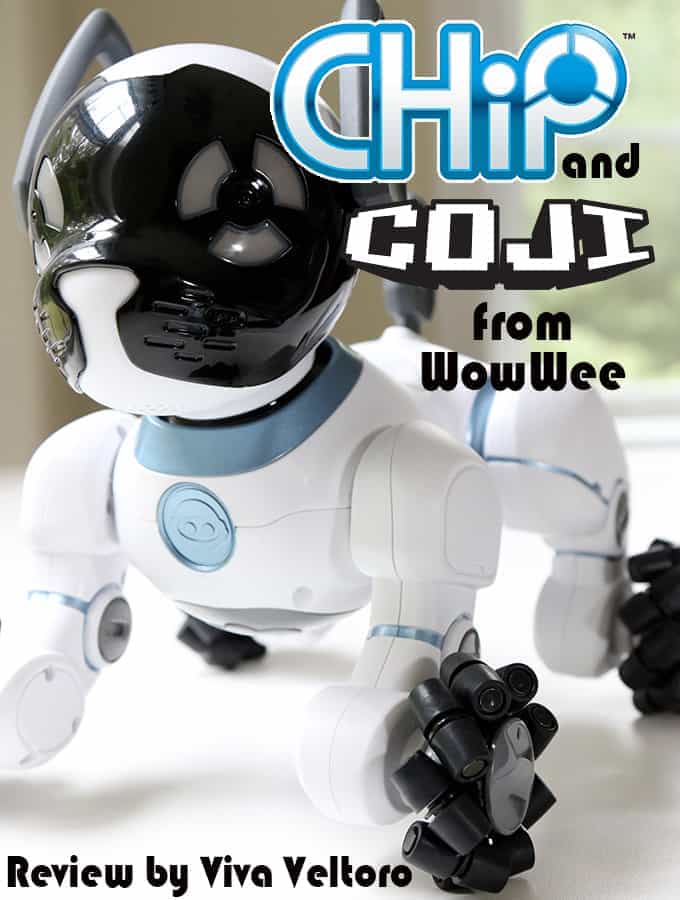 Robot toys will never cease to be objects of complete fascination to children. They were huge in the 80's, and they're huge today, but the difference is that today's robots are doing things you've never seen before. Introducing WowWee's COJI and CHiP, WowWee's finest: 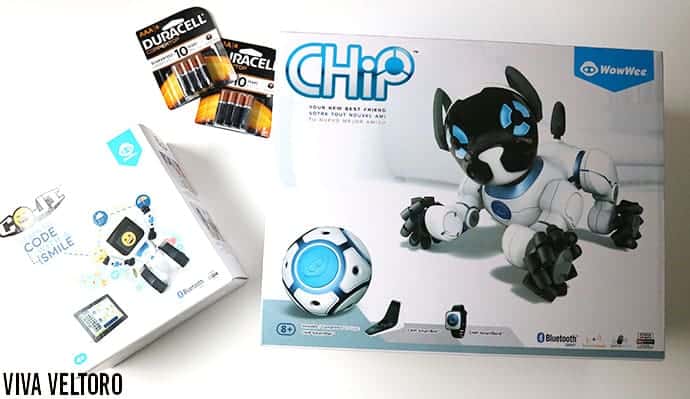 Let's begin with cute little COJI and I'll show you how he is like no other robot toy I've seen: he teaches coding! Because he is so adorable and interesting, my kids don't even realize they are learning new skills while they play. Duracell is helping us power up imagination and with just a few batteries installed in the back, we're ready to rock. 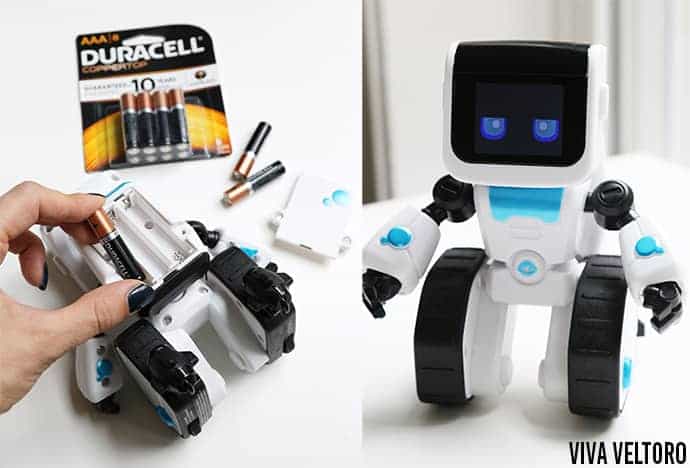 We all know that children are filling their free time with activities and devices that extend beyond the basic games and toys that we millennials grew up with, so it probably doesn't surprise you how attractive a toy like this can be for the child who likes to utilize his or her programming skills. Traditional coding might be above what the average child is capable of, but not when it is taught in their language of emojis!

You don't have to be a reader to be able to use the app and control COJI. Initially, all you need is to be able to recognize emojis and problem solve as you decifer what they could mean, but there are also different levels of challenges so that children and stretch their critical thinking skills and grow their programming skills and they learn to do more things with their COJI. 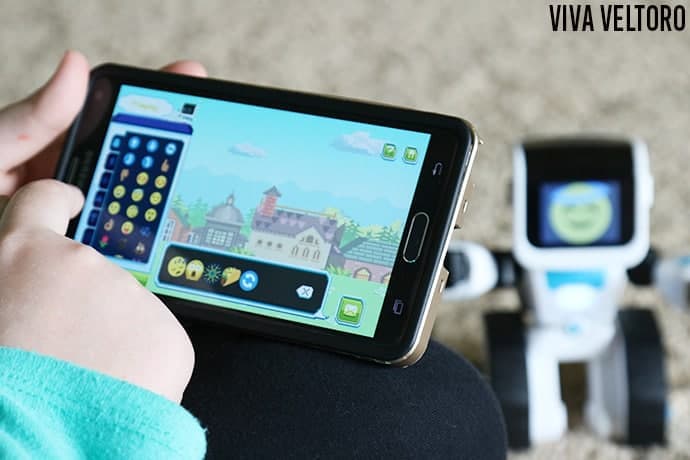 One of COJI's activities involves stringing together faces and images that give COJI directions. Type in your "code", send, and watch him roll! COJI is promoting self-learning as my kids explore and use their creativity to produce different results in what COJI will do or say. They actively participate in "trial and error" experiences first hand while they giggle and squeal through the funnest games. 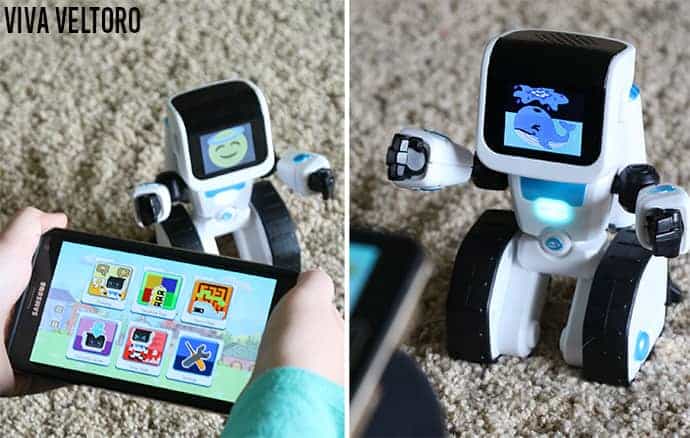 Other activities on the app incorporate problem solving through game play, where they overcome obstacles as they direct COJI through a maze and master levels of accomplishment. 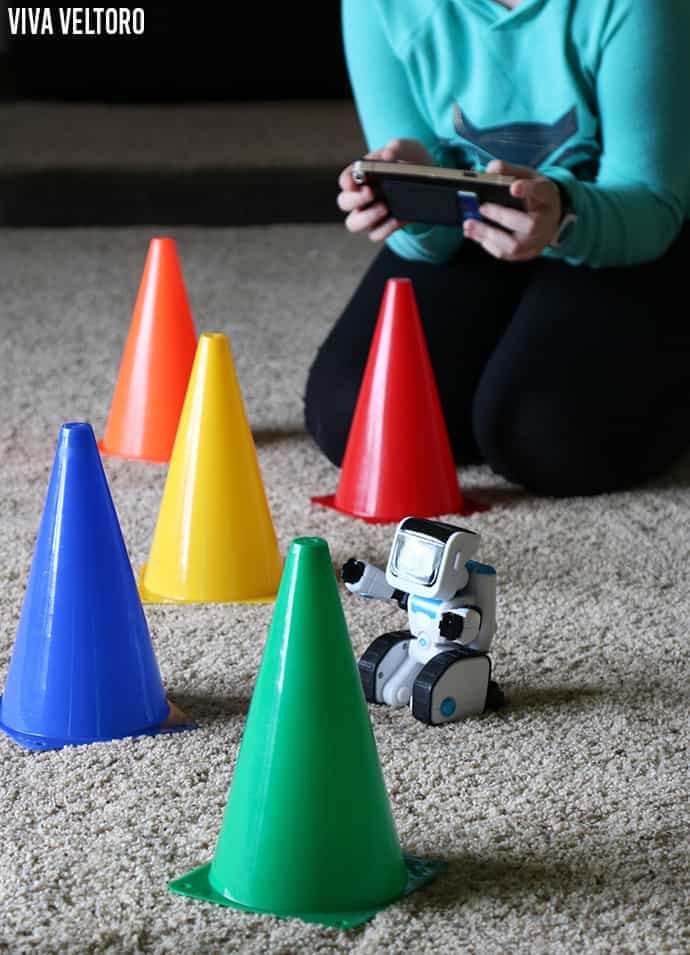 Interacting with COJI can be fun even without the app. By tilting or shaking or moving him around, he'll react with cute picture, sounds, and actions. After playing the skill-testing games and critical thinking activities, we like to drive COJI around using our smartphone or tablet as the remote control! 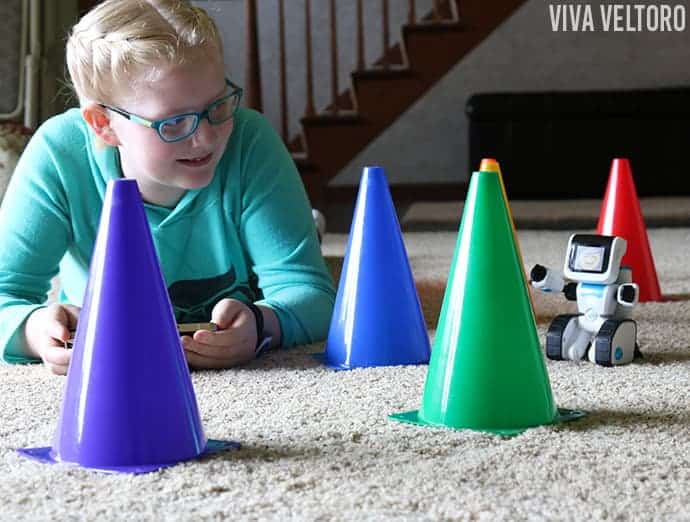 Find this WowWee cutie at Toys"R"Us! While you're there, don't forget your Duracell batteries!

And now let me introduce you to CHiP! My kids and my husband have been begging for a dog for as long as we've been a family. I have my reasons and I'm sticking to them. I hate to be the mean mom, but raising children is about all I can handle right now and raising a dog on top of that would do me in, but a huge light bulb went off in my head when I learned about CHiP, the intelligent robot puppy, and I realized that this one toy was going to make me the world's greatest mom. 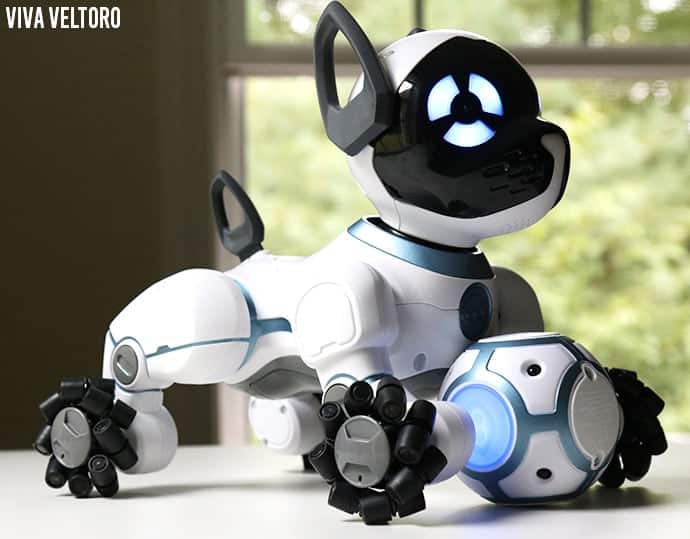 Robot dogs are not new to the toy scene, but you probably haven't seen such an interactive pet as this. CHiP will respond when you call, obey your commands, and adapt over time to positive reinforcement. Plus he's so adorable with his smooth face, cute little nose, and soft rubber ears! The interaction between my children and CHiP is really something they don't experience with other toys. 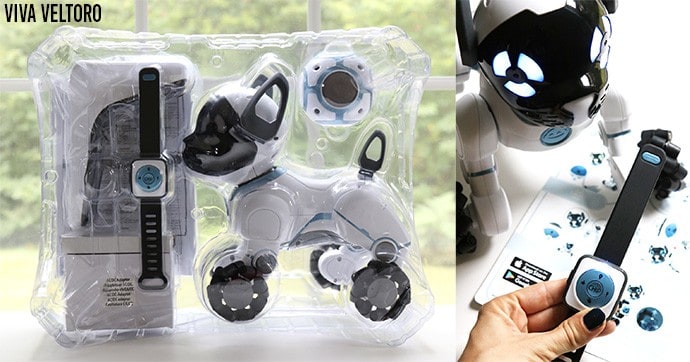 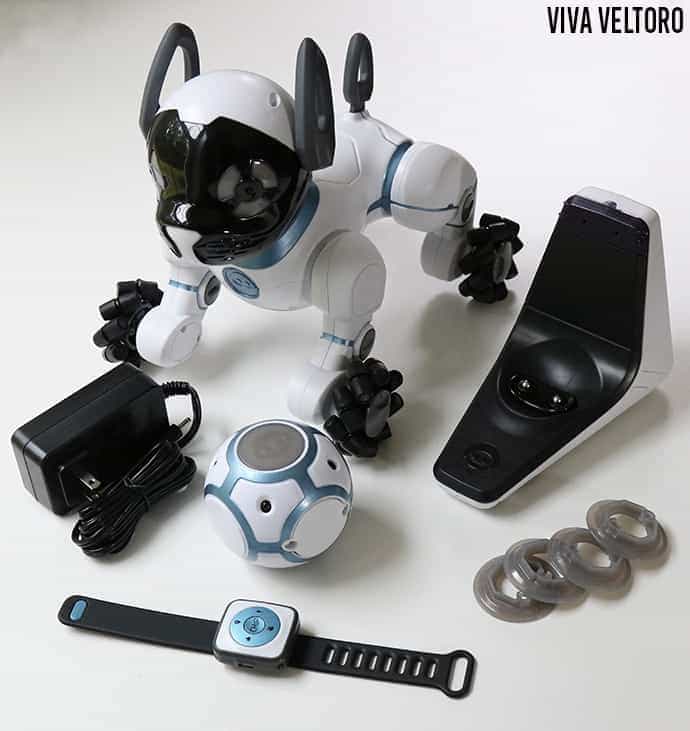 CHiP comes with everything seen here and he is self-charging, meaning he will go to his charging station when he is low on batteries, but you'll want to pick up some Duracell batteries for his SmartBall while you're at Toys"R"Us. Since Duracell is the #1 Trusted Brand by parents for powering long-lasting imaginative play, you might as well stock up on enough for all your battery-powered toys and accessories this season! I was happy to discover that there was no set-up required and CHiP was partially charged when we pulled him out of the box. 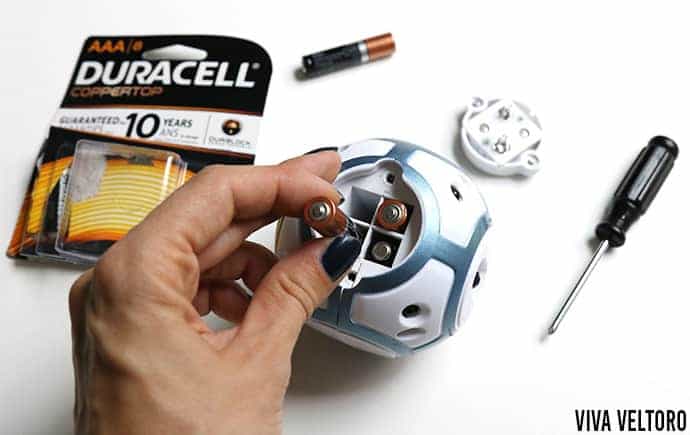 There is plenty to do with this cute little pet even before you download the free app. You get to explore and get to know this puppy as you interact and learn his commands. The way we respond to his actions influences his future behavior so that no other CHiP is exactly like ours. 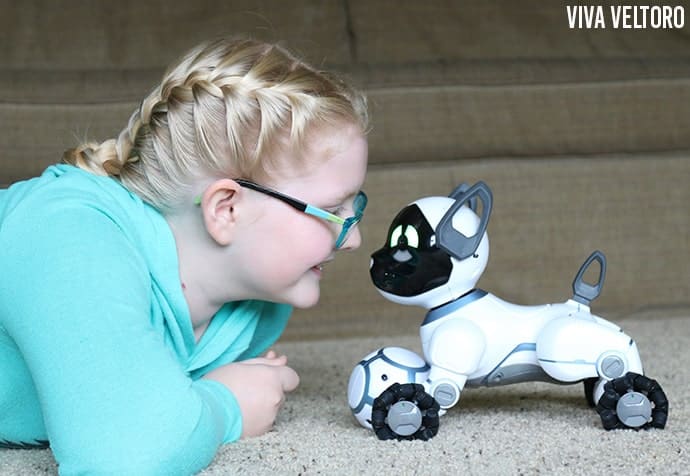 The app is easy to find and it gives instructions with pictures on how to access the touch commands, like getting reactions out of CHiP by rubbing his nose, patting his head, picking him up, etc. He is equipped with very advanced sensors including Bluetooth LE, beaconsense technology, gesturesense technology, and voice recognition. For my children, there is nothing quite like getting a response when they say, "Hey CHiP!" for the first time. He hears and responds just like a real dog!

We didn't have any problem finding the app to download onto our smartphones, but my phone was not compatible with the newest version, so my kids are currently only able to play using my husband's phone. This works fine when Dad is home and not using his phone, but it might become a big problem when he is at work all day. You could solve this problem by downloading the app onto a tablet or other device that is shared with your children. Within the app, we can see three status indicators that will show us his happiness level, hunger level, and battery life. Without the app, you would simply pay attention to CHiP's temperament to decipher whether he needs one of these three things, but the app does provide a useful visual with ideas on what to do next with him. 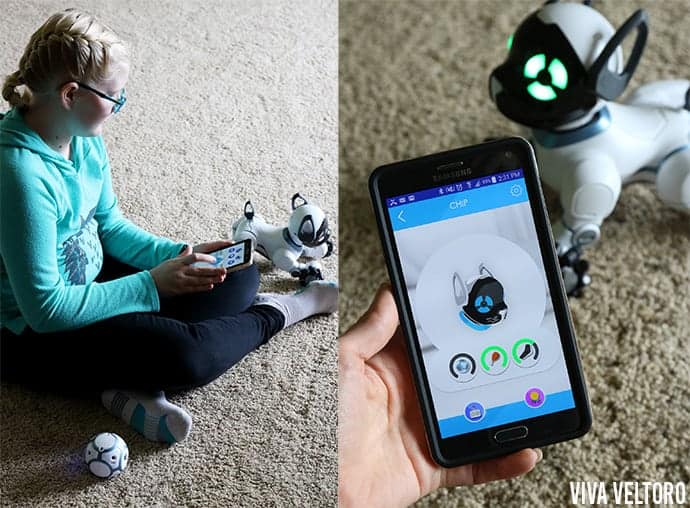 CHiP will respond to its name and our commands using speech recognition technology. I was initially worried that he would only respond to certain voices, or just the first voice he learns to recognize, but we've found that he will interact and respond to all of my children's voices, which is for the best, since he really is the family pet now and doesn't belong to a single owner. My kids asked if we'd be able to change CHiP's name, and sure enough, within the app settings menu, there is a place to "change voice command" where we were able to record our own voice with a new name we chose.

The SmartBall is a fun element! My children had hoped that it would be a bouncing ball that they could toss around the house, but it is very much a battery-powered, heavy, smart device that should only be rolled fairly short distances, and best on carpet. Playing fetch with CHiP is the most popular game in the house right now! CHiP doesn't have a problem locating the ball and his maneuverability is so impressive, though he moves a little slower on thick carpet vs. smooth hard floors. The wheel design is fascinating! They allow him to do all sorts of quick turning, rotating, dancing, bending, etc.

A key component to shaping CHiP's adaptive personality is by using the the CHiP SmartBand. This allows CHiP to respond to your hand gestures as well as give immediate feedback. I like that the band is simple enough for young children to use, based on only four icons and one center button, and then how the app is more extensive in options for older children to use. The SmartBand is essential, however, if you want CHiP to be able to recognize you, follow you, bring the ball back to you, and even pester you to play! This does make it tricky when there are several children who want to play, but then again, it creates a visible indicator of authority for them to follow when more than one child wants to train and play. We found that CHiP has a difficult time receiving directions if he is not facing the direction of the SmartBand, but this only encourages children to get up and move around with him. 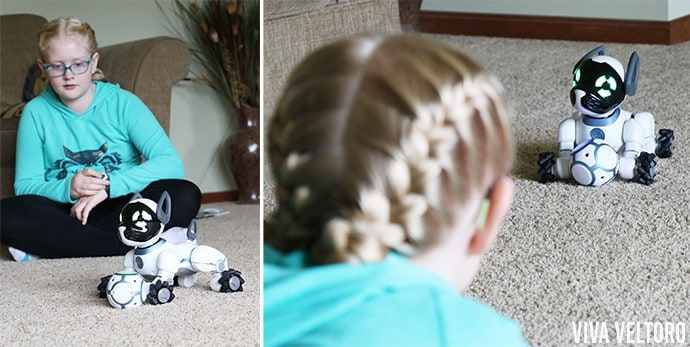 I will say that the remote control feature on the app is MUCH easier to use than directing CHiP around by the SmartBand. Leading CHiP feels much more effective and his actions more responsive through the app. I also think that the app is quite important if you want to learn how to get CHiP to perform certain actions or tricks. Mere trial and error without these directions might be frustrating, but within the app, it is clear and informative. I also haven't been able to figure out where to feed CHiP without the app, so needless to say, to get the full dog-training experience, the app is pretty necessary. 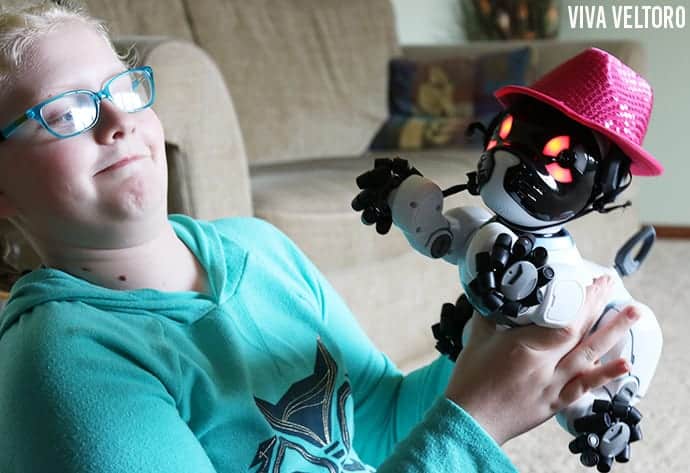 The more we play with him, the more we feel like CHiP's adaptive personality is showing. We put this sparkly pink hat on his head and he got red-eyed and angry, growling just like a real dog! When we reward him for good behavior on the SmartBand, he is learning to adapt to our preferences. For instance, when we touch his nose, he sometimes reacts with a kiss, a pant, or a growl, and by hitting "Like" on the SmartBand to our favorite response, he will do more of that action in the future. I like how this also makes CHiP not just a toy that you watch, but a pet that you need to respond to in order to bring out his full potential. 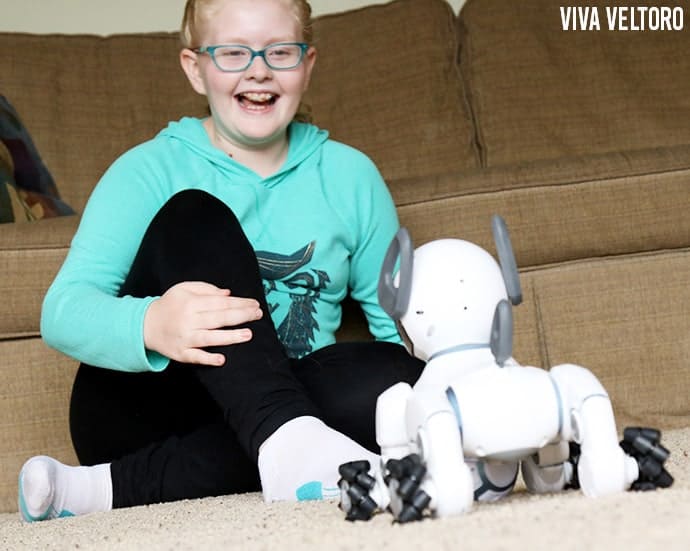 From a mother's perspective, I think these toys from WowWee are just the kind of things that elementary age children will go nuts for. They are things I enjoy seeing my kids play with. My children are off of the computer and away from the TV while they are actively engaged with new friends that are teachable and interesting. My children are curious and engaged and having the time of their lives with CHiP and COJI!

Buy it: You can purchase both WowWee COJI and WowWee CHiP, along with the Duracell batteries to power up imagination, from Toy"R"Us!