Sharks are so popular with little boys, and putting together a "killer" party can be easy with our shark birthday party ideas! We loved putting on a shark party for our son last week, and we'd love to share some of our ideas so that you throw one yourself! Don't miss our tutorial for this fun shark shirt too! 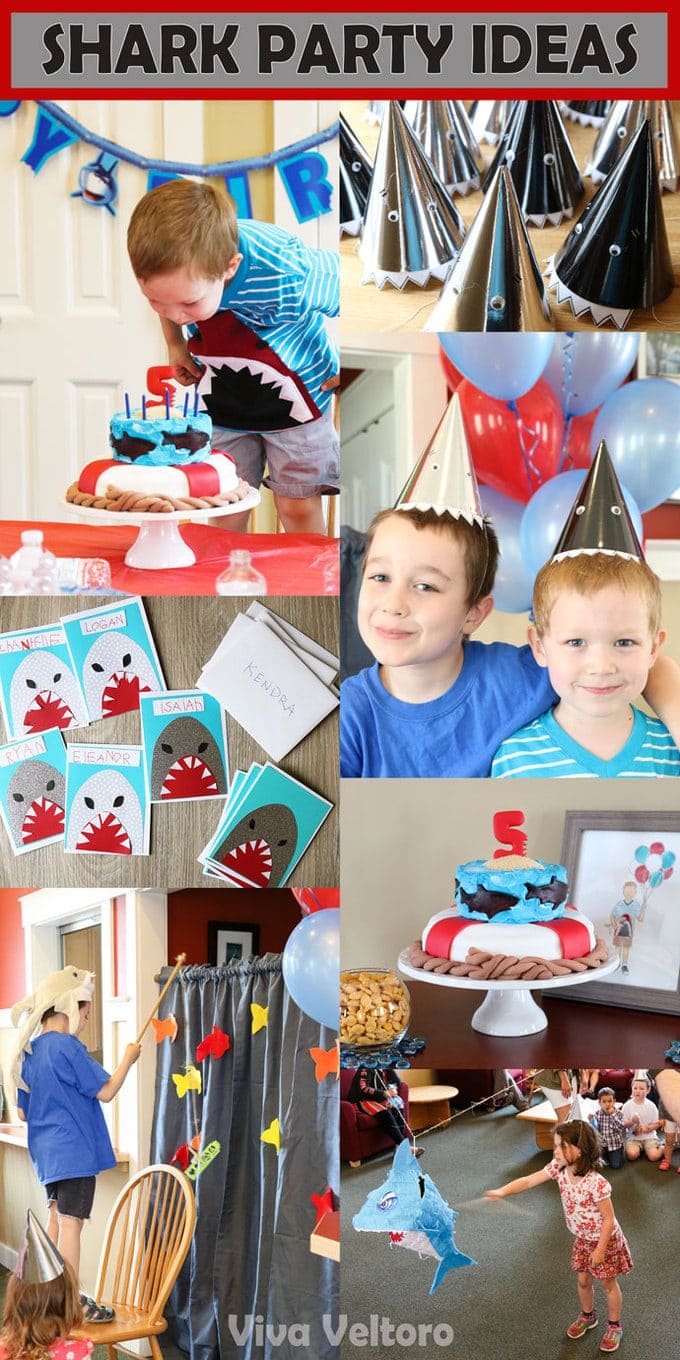 My son developed a fascination with sharks recently, so when I brought up the idea of doing a shark-themed party for his upcoming 5th birthday, he was all in! We started making handmade invitations, which really entailed only cutting out simple shapes, which my son glued down himself. The silver sparkle paper was a big hit, and one 12" x 12" sheet goes a long way. 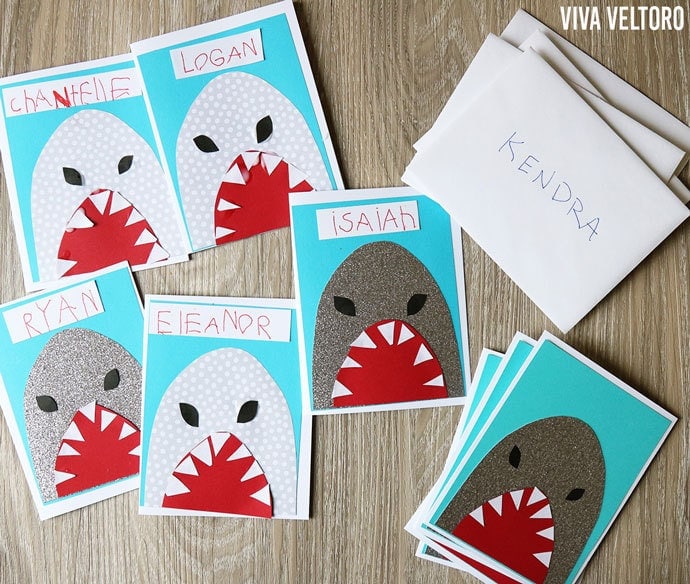 Shark party hats were another project my son was so happy to help me with for his shark birthday party. He helped me cut out strips of triangles which we glued to the inside of metallic pointed hats, then I hot-glued on some googly eyes. He gave each shark some eyebrow lines with permanent markers. 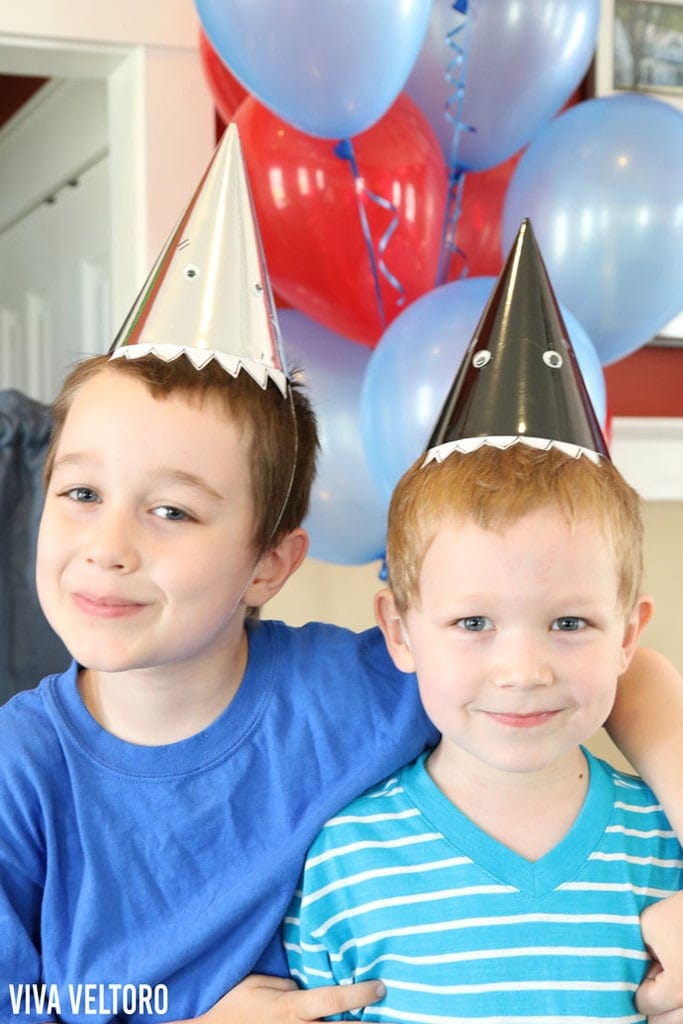 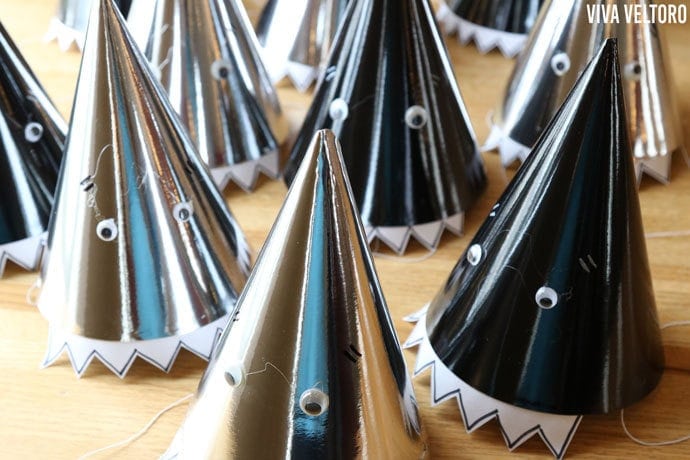 I think the key to making this shark cake look nice was keeping the top layer free and forgiving with a loose buttercream layer of mixed white and blue frosting! You could cover an entire cake with loose knife swirls and I think it'd look great! The "5" is made of fondant and poked into a pile of graham cracker crumbs with a toothpick. The sharks are also red fondant, but painted with a mixture of black food coloring and lemon extract to make them glossy! 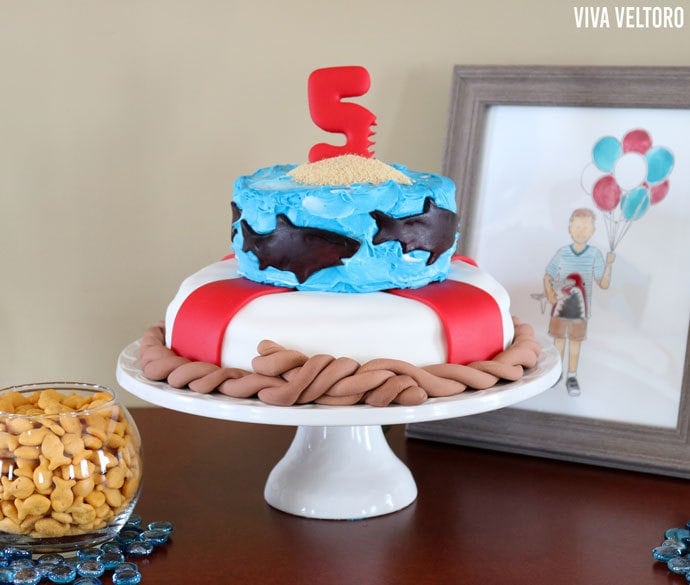 We put goldfish crackers and gummy worms in fish bowls with piles of flattened glass marbles for a fish tank effect. 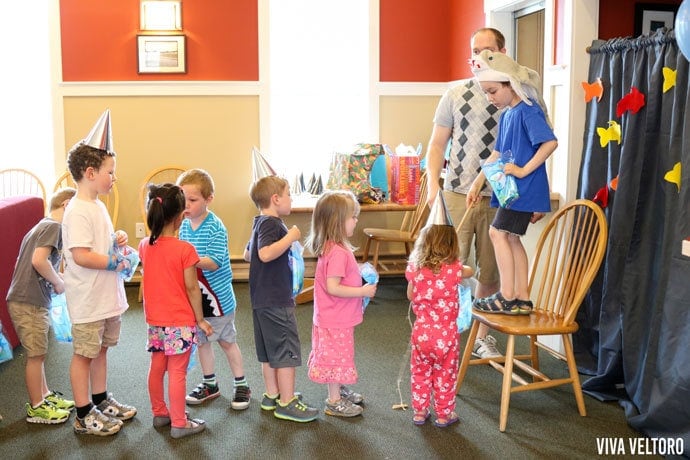 The big hit of the shark party was a fishing game! I used a shower curtain rod to rig up some blue blackout curtains. The felt fish were simply pinned on with sewing pins from behind so that I didn't have glue residue on the curtains after the party. The fishing pole was simply a dowel rod with twine and a clothespin tied on the end, with which to clip small toys and treats.

Each kid would come up to the curtain and throw over their fishing rod to "go fishing" for a toy. Someone behind the curtain would clip on a small treat and then tug on the string for the fisher to know that they caught something! This was a big hit, especially when they got to go up several times to fish for more treats. 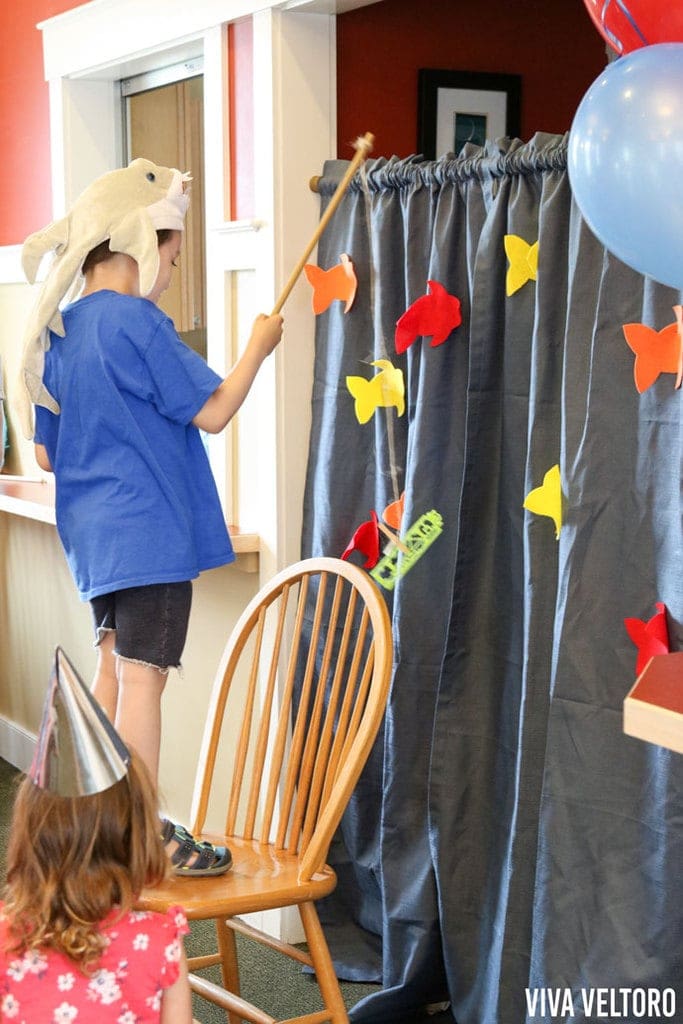 And every shark party needs a shark pinata! This particular pinata can be found on Amazon. 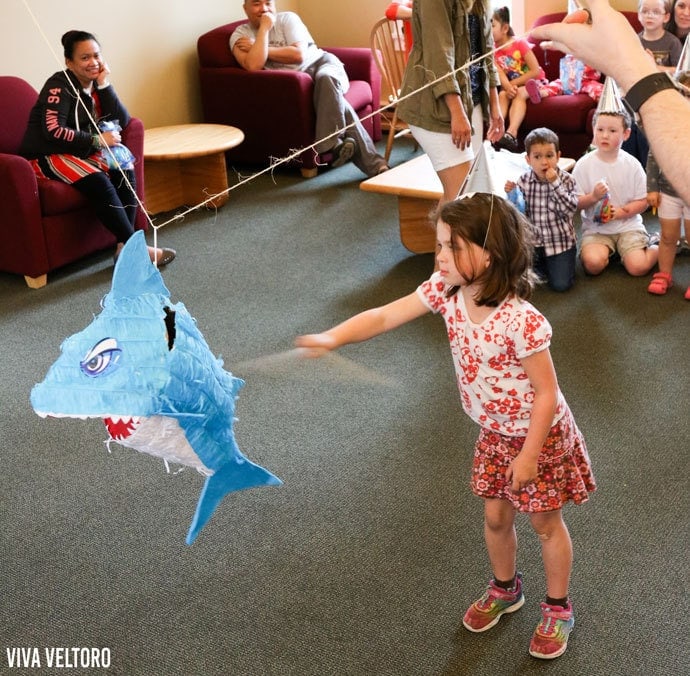 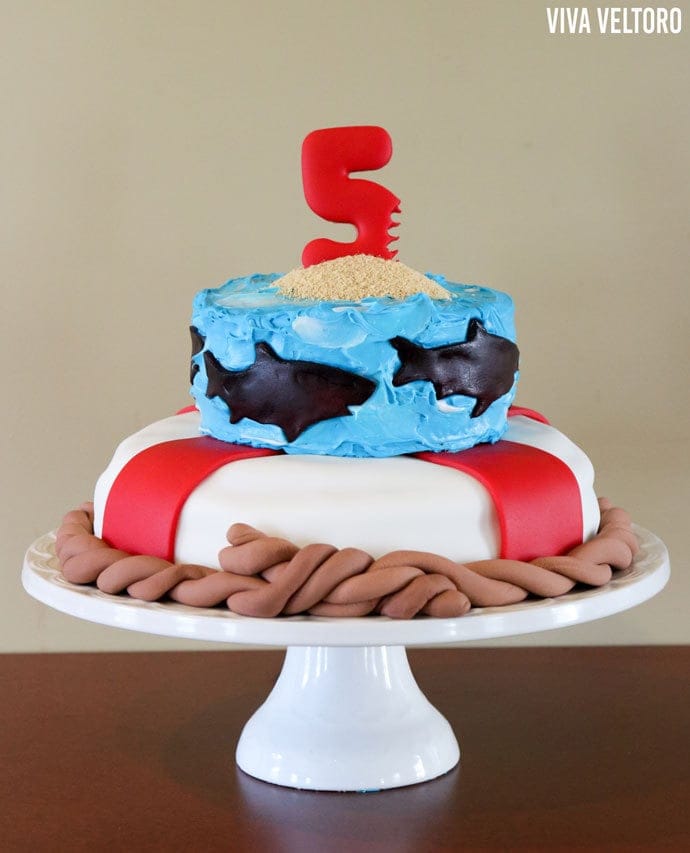 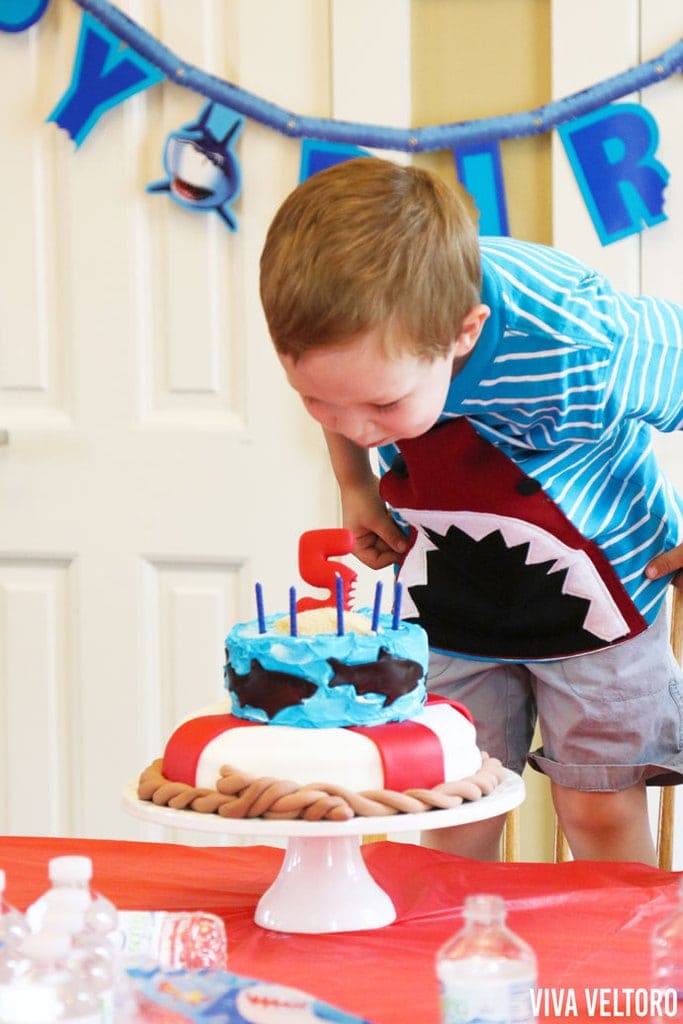 My son's favorite memorable item from his shark party was his shark shirt! He LOVES it and it's a struggle to keep keep him from wearing it every single day. Be sure to check out our Shark T Shirt Tutorial to make your own! 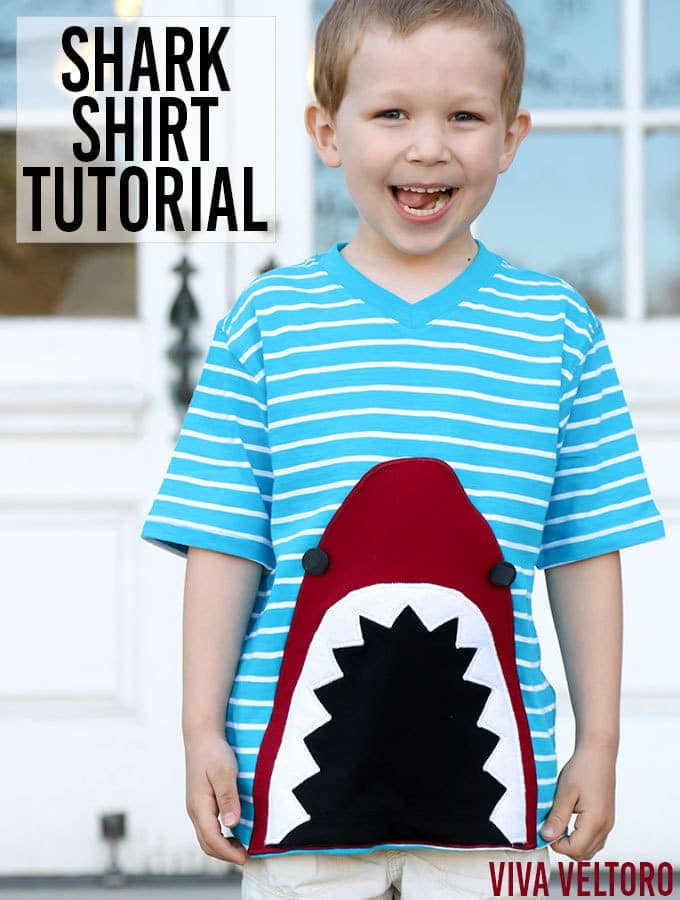 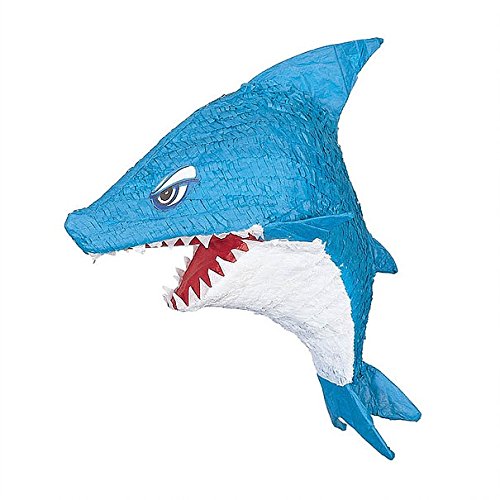 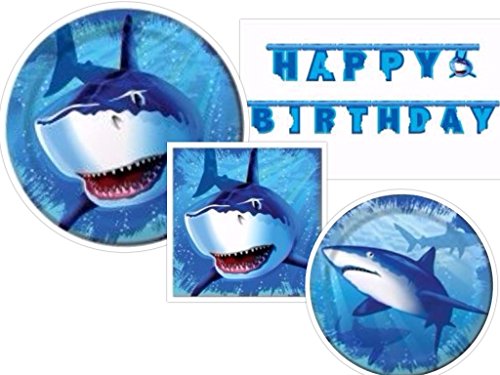 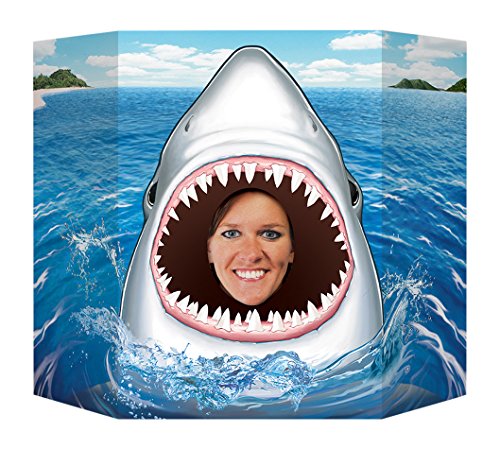 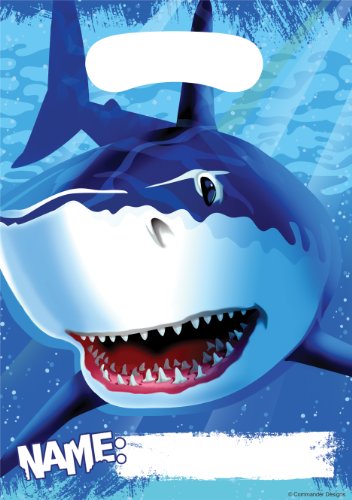 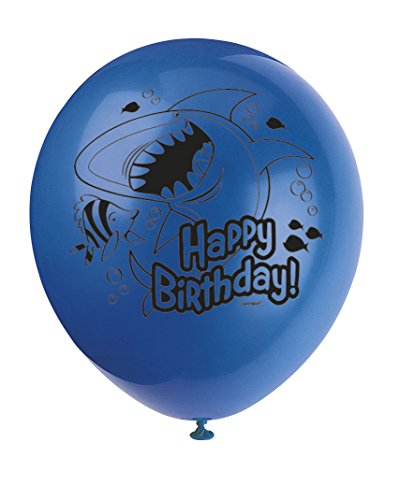 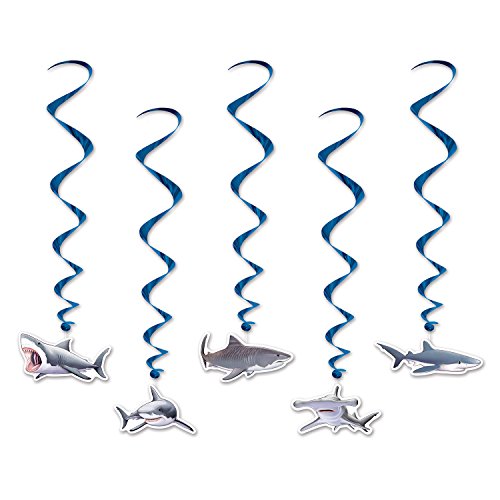 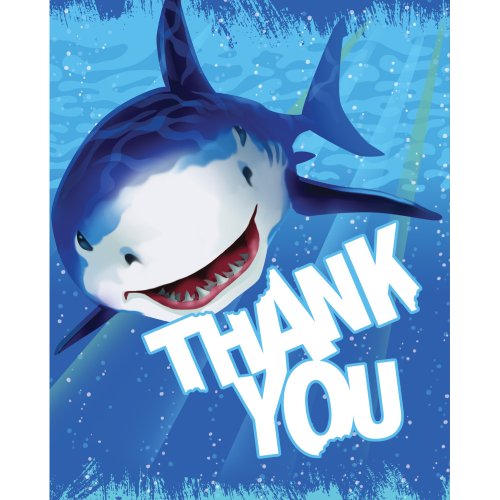 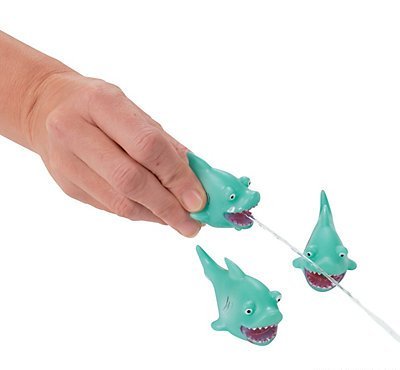 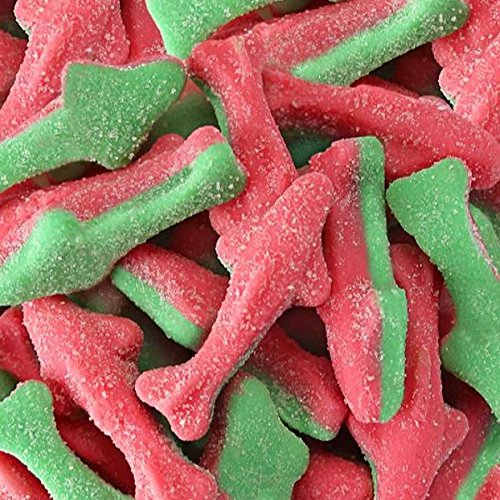 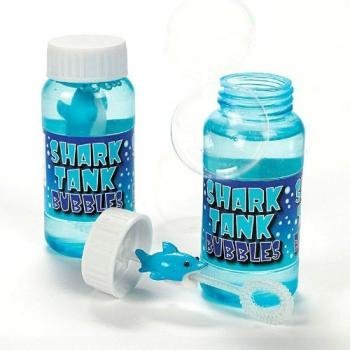 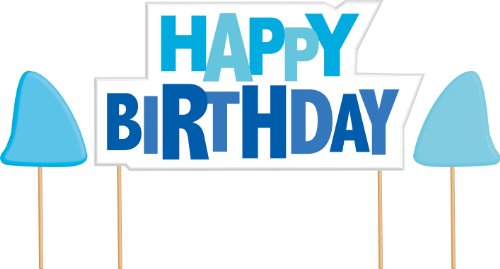