You might've heard the exciting news going around – Disney Mickey Mouse's 90th Anniversary is here! Can you believe that the famous star has been in our lives (and our parent's lives and our grandparent's lives) for so long?! So many celebrations are in order, so along with Disney and DOLE®, we're excited to join in on the fun with our colorful recipe for frozen banana pops! 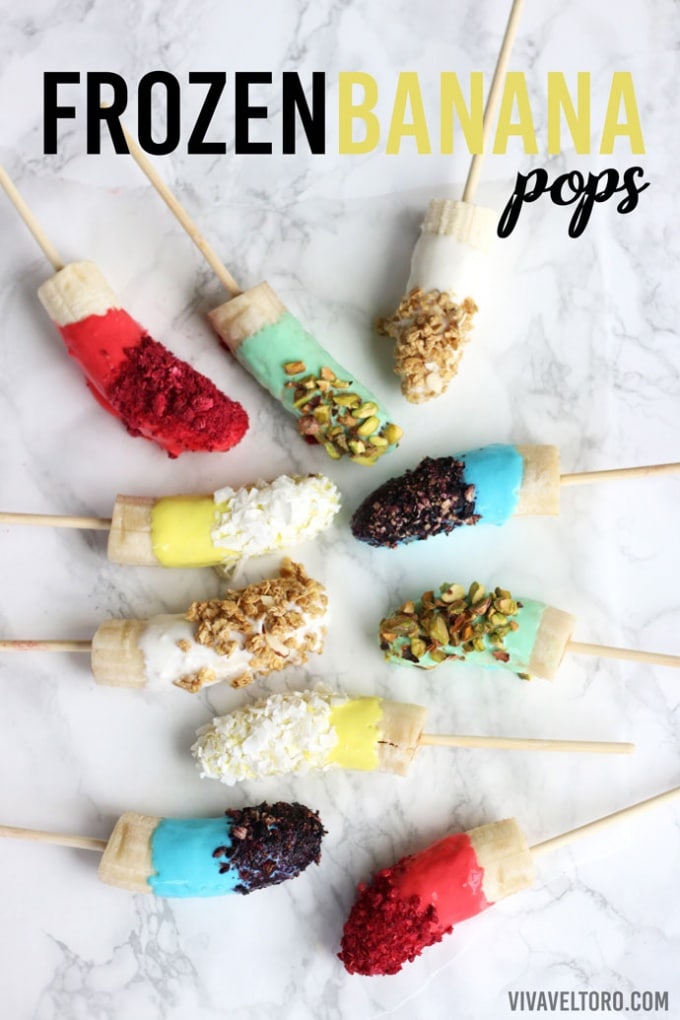 My family and I have been both Disney fans and DOLE® eaters all our lives, so it just made sense that the two of them would have a long collaborative friendship and come together again for an exciting four months of activities that highlight fresh takes on classic recipes. 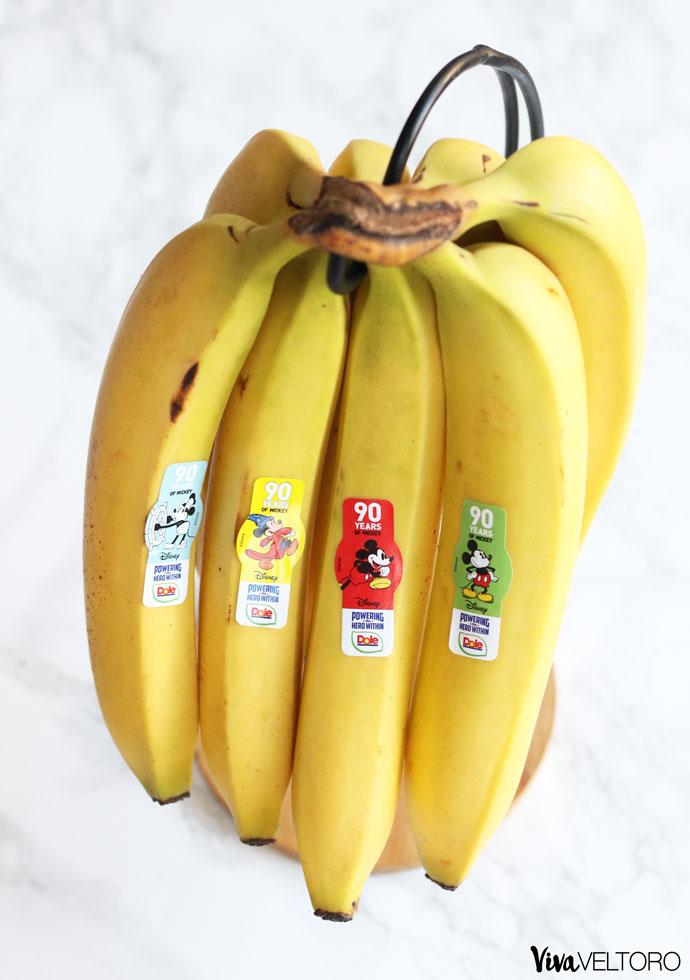 Almost 100 years ago, while the founders of DOLE® were growing pineapples in Hawaii, Walt Disney moved to Hollywood to establish Disney Bros. Studio. In 1976, DOLE® became the sponsor of Walt Disney's Enchanted Tiki Room at the Disneyland Resort and at the Magic Kingdom in Walt Disney World. DOLE® has always been encouraging healthy eating and in 1991, they launched the DOLE® 5-A-Day to encourage families to eat five or more daily servings of fruits and vegetables. In 2016, DOLE® and Disney announced a multiyear nutritional alliance to help make healthy eating more fun for kids and families. 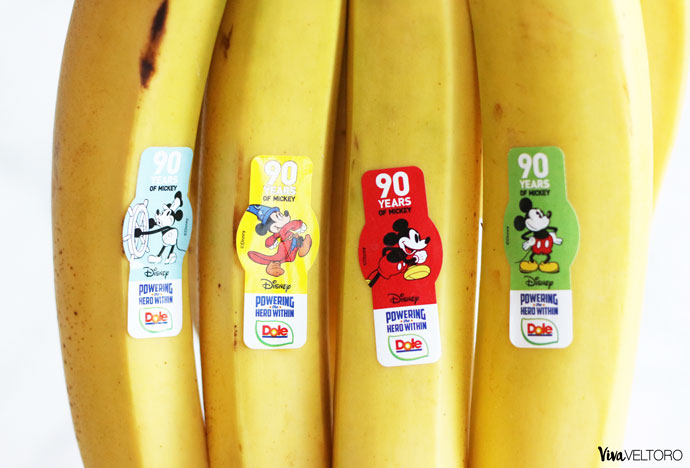 From Oct. 15th through January 2019, images of Mickey Mouse, the "True Original", can be seen on tens of millions of DOLE® bananas, pineapples, packaged salads, and vegetables! How fun it was for me to find all these adorable Disney stickers on DOLE® fruits and vegetables in the produce sections all over town! I found Mickey from different decades on the grapes, pineapples, and bananas, all celebrating 90 years of Mickey!

Today's recipe for Frozen Banana Pops embodies so much of what DOLE® and Disney believe in: fun and healthy eating! These frozen banana pops are so colorful and reminiscent of Disney, and made with delicious and healthy DOLE® bananas! 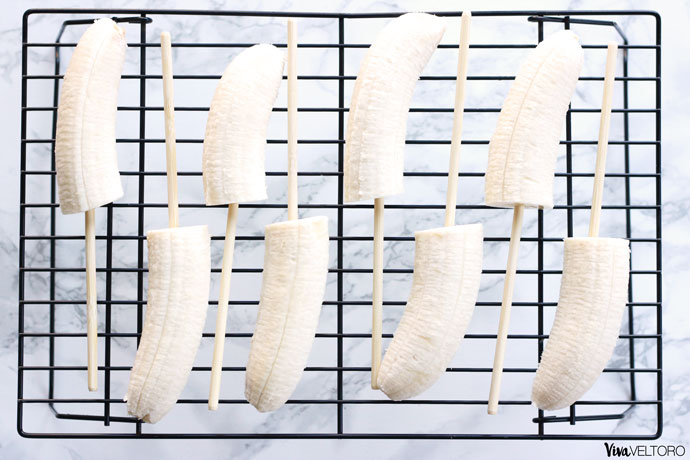 The first step to creating these Frozen Banana Pops are to cut each yellow banana in half and peel. I like using bananas that have just barely turned fully yellow and are fairly spot-less, so they are not too soft. Spear each banana with a stick. Instead of popsicle sticks, I prefer to use sticks that are used for candy apples because they are pointed on one end and are less likely to split the banana when inserted. Quickly place these in the freezer and leave them there until all other ingredients are prepared. This will keep them from turning brown and will allow the yogurt to freeze faster after dipped. 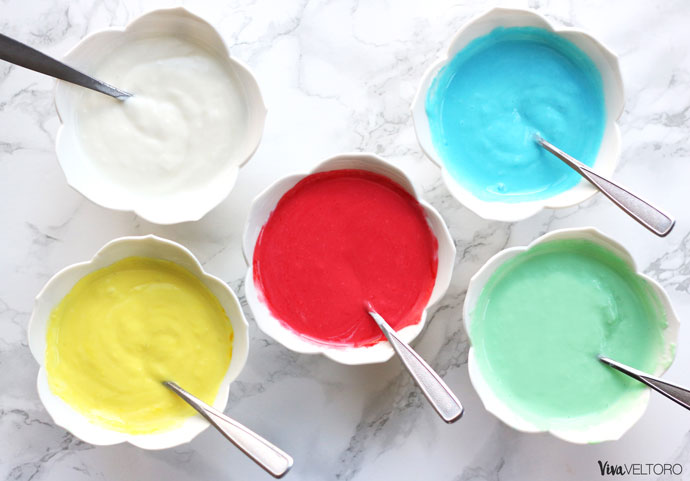 Next, prepare the yogurt bowls for dipping. Pour about a half cup of low-fat vanilla yogurt into each bowl, and add vegan food coloring until the right color is achieved. Stir until one consistent color. 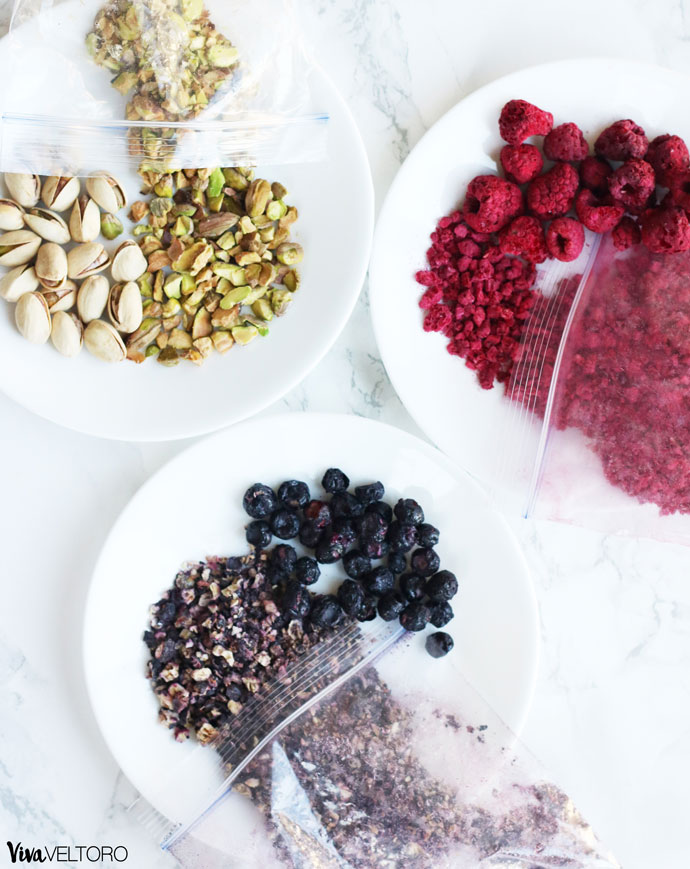 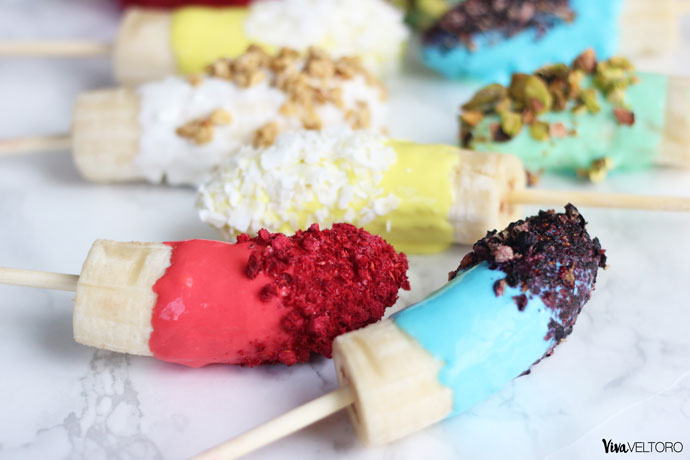 Pull the bananas out of the freezer, dip into the bowls of yogurt, and sprinkle on the toppings! Place them back in the freezer for 15 minutes to freeze completely, then enjoy! 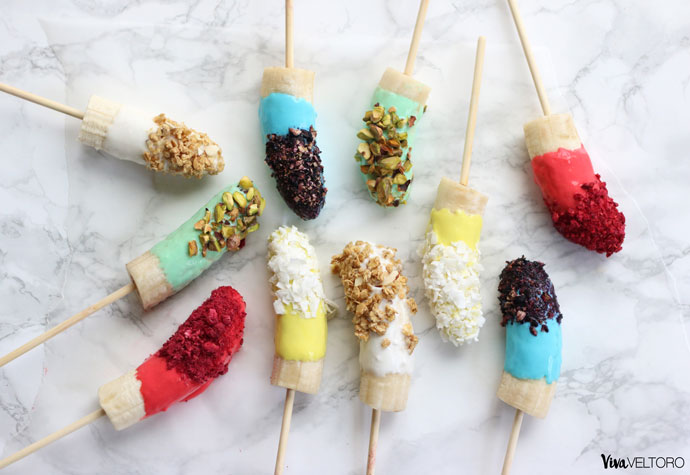 My kids gobbled these up! They LOVED the colors and the toppings! They were so surprised when I told them that I didn't mind if they had another frozen banana pop because they were made of nutritious ingredients. 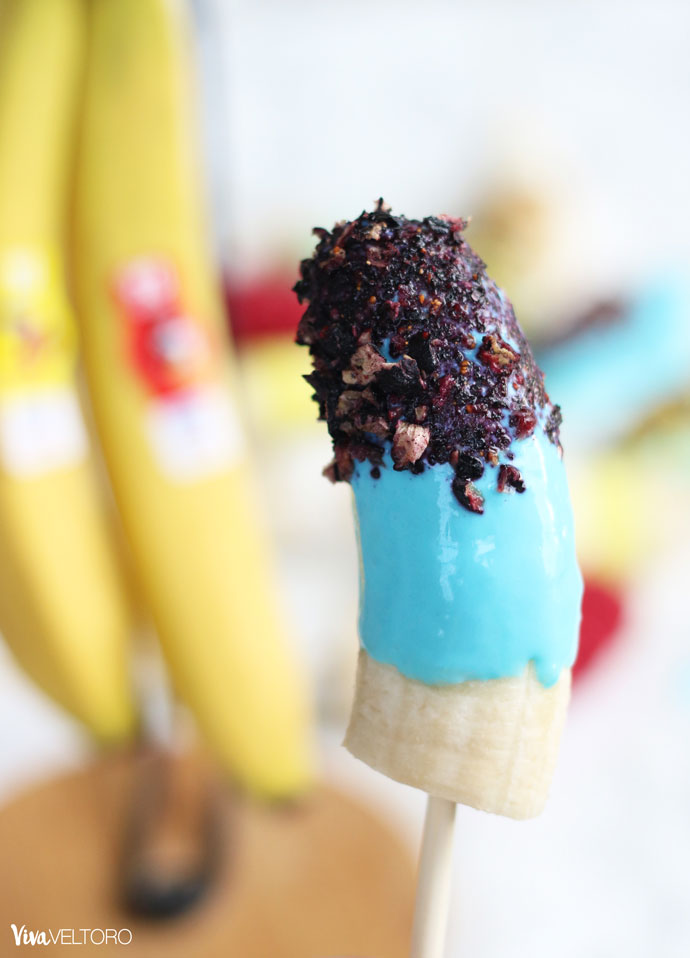 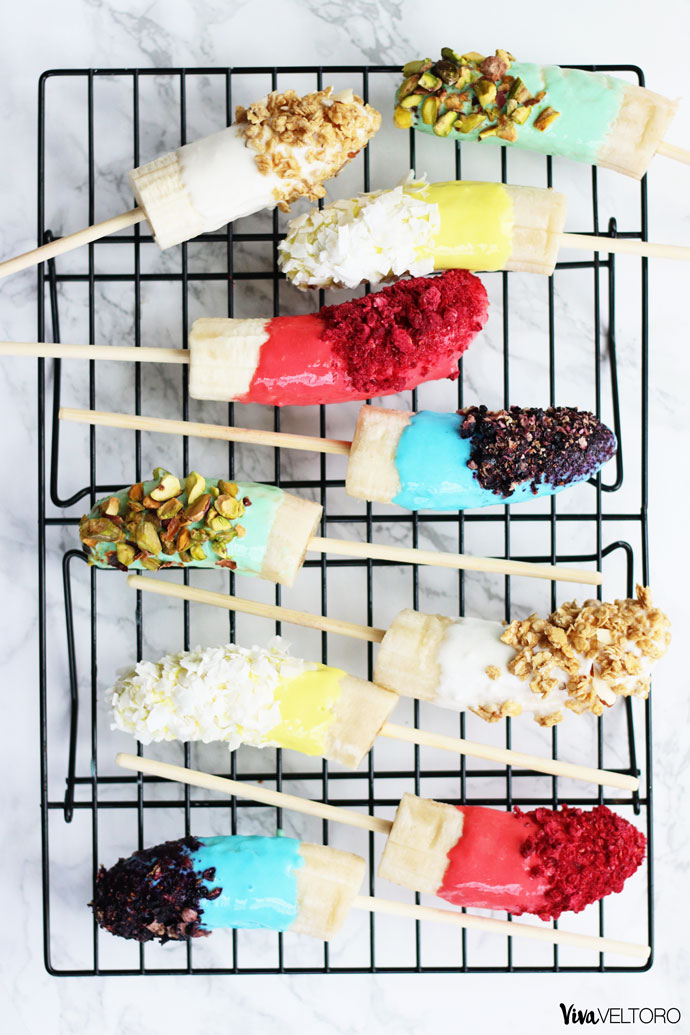 These frozen banana pops were such a fun treat for us to make and enjoy together! 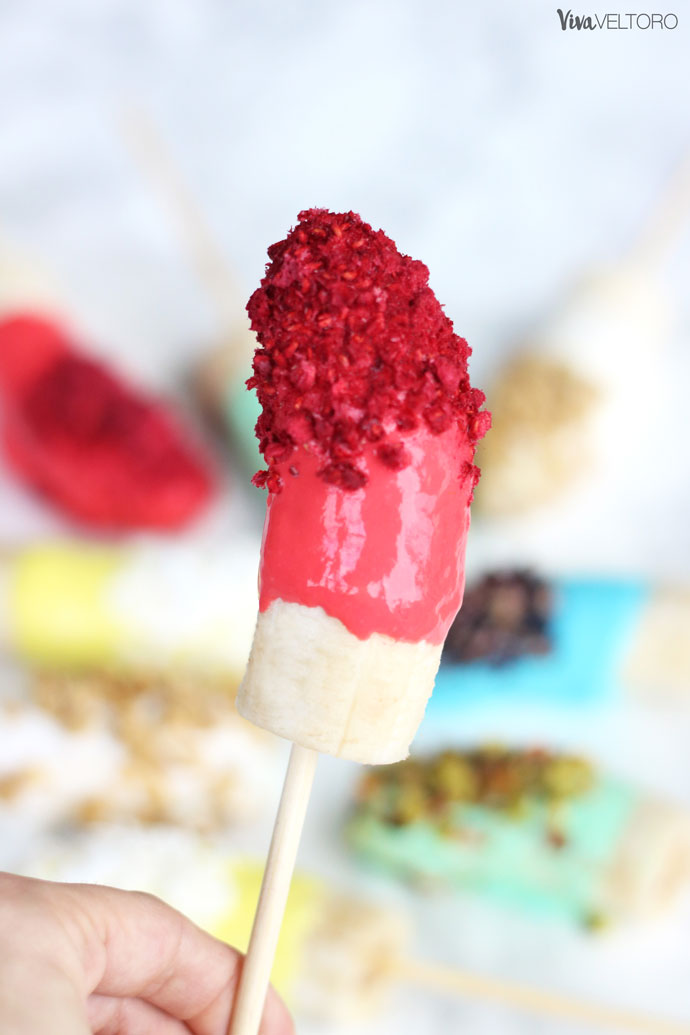 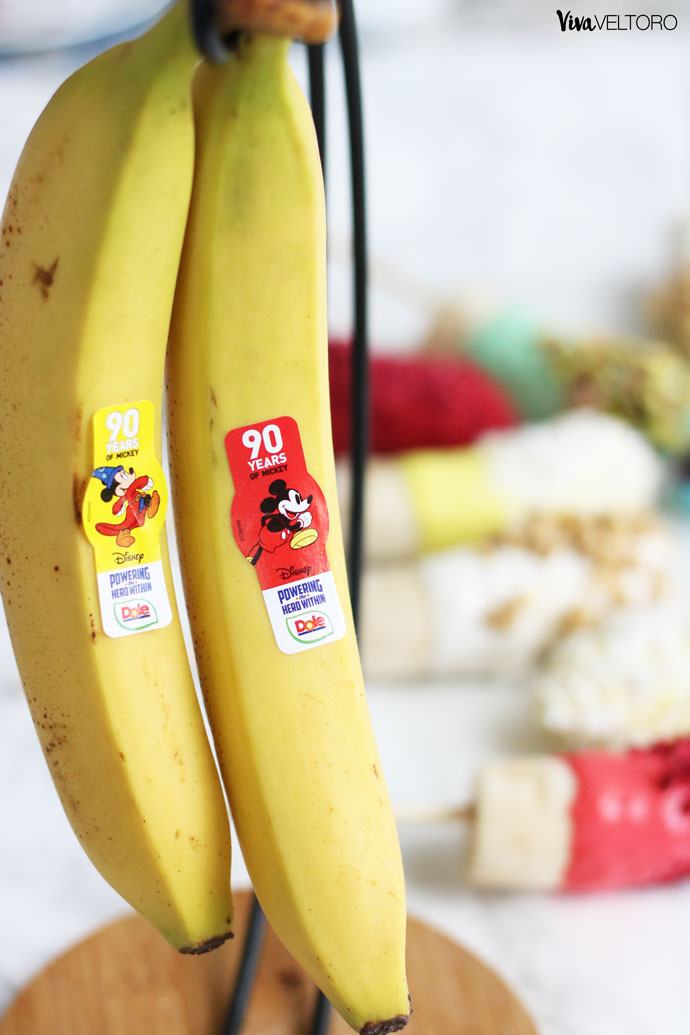 At the heart of this 90th Anniversary celebration are 19 original recipes that include entrees, salads, side dishes, smoothies, and desserts. From classic to old school to modern, you'll find a bright and beautiful variety of recipes to try. My favorites are the "Steamboat Willie" Green Apple Waldorf, the DOLE® Mushroom Rockefeller (a non-seafood alternative to Oysters Rockefeller), and the DOLE® Pineapple Downside-Up Cake! 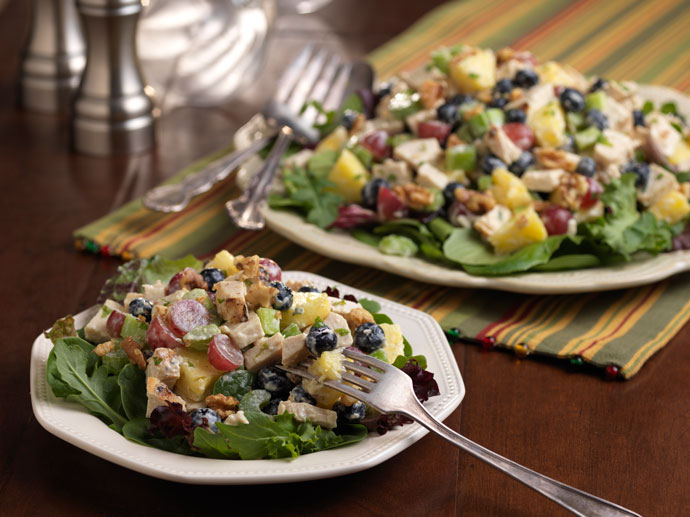 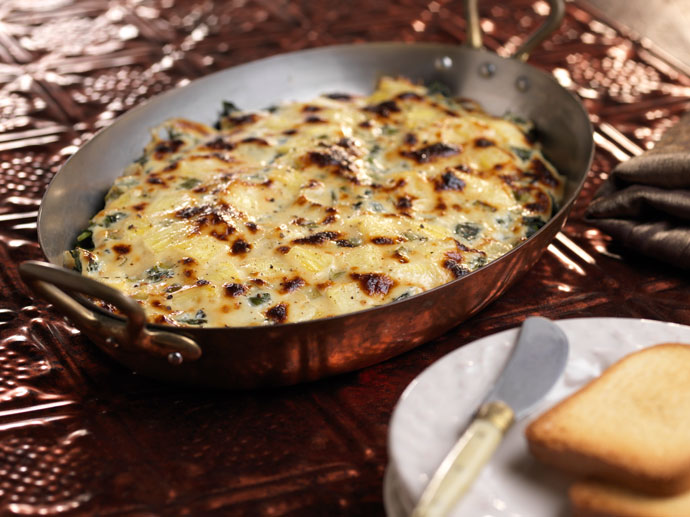 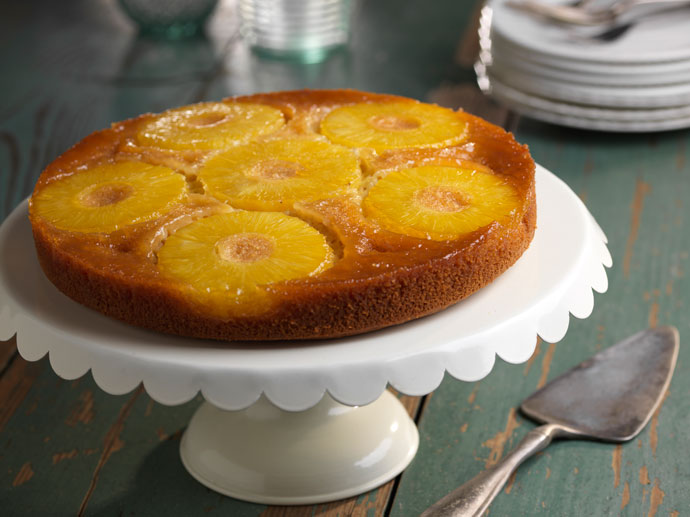 How fun to be a part of DOLE® and Disney's rich history of working toward happier, healthier families. I can stand behind everything they are promoting as they encourage kids of all ages to be more active and eat better. Be on the lookout for these DOLE® products celebrating Mickey's 90th Anniversary by featuring Mickey Mouse: DOLE® Bananas, DOLE® Pineapples, DOLE® American Blend Salad, DOLE® Garden Salad, DOLE® Classic Coleslaw, DOLE® Colourful Coleslaw (CANADA), DOLE® Shredded Lettuce, DOLE® Very Veggie, DOLE® Premium Celery Hearts, DOLE® Celery, and DOLE® Iceburg Lettuce.

More Mickey-themed recipes will be unveiled in the coming weeks and everything will be available on the DOLE® Pinterest page or at www.dole.com/disneymickeymouse. You can also find more DOLE® seasonal recipes, serving suggestions, and healthy-living tips at http://www.dole.com (URL tracking link to be provided)!