If you were a fan of DuckTales as a kid, get ready for the reboot! DuckTales for 2017 is coming to Disney XD and it's a blast from the past in the best way possible. I had the chance to sit down with DuckTales Executive Producer Matt Youngberg and Co-Producer Francisco Angones during my time at the D23 Expo in Anaheim (and I got to jump into Scrooge McDuck's Money Bin!), and I've got some pretty fun facts that DuckTales fans will enjoy and a review of the show. 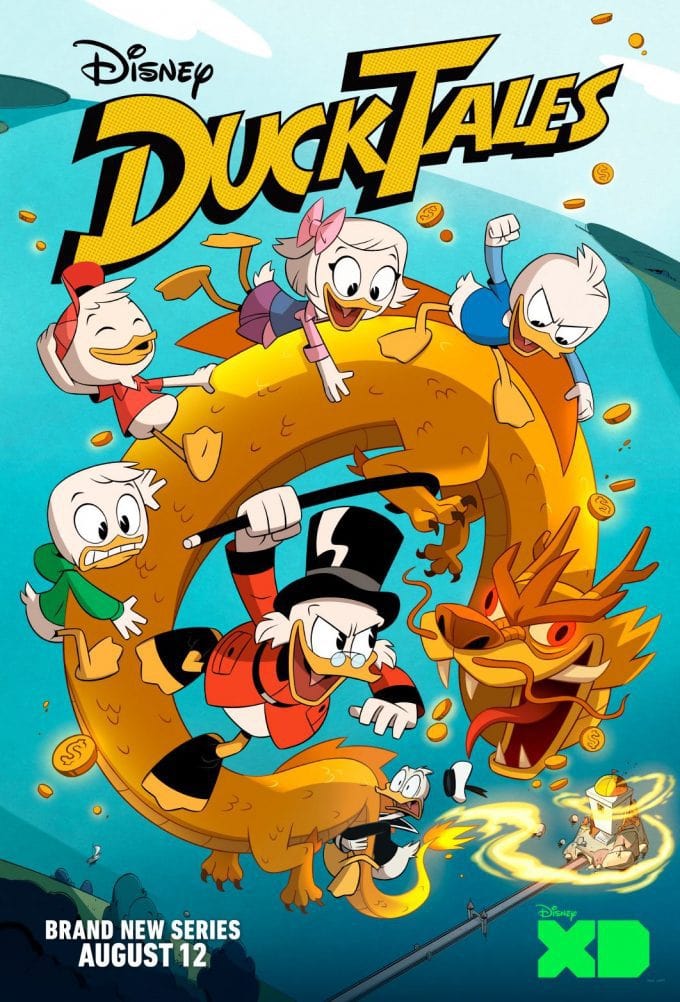 I grew up on DuckTales. The original series premiered in 1987, when I was just six years old, and ran until 1990. I vividly remember the catchy theme song with fun "Woo Hoos" and Webby planting a kiss on the scary shark. This cartoon was one of my favorites and my husband and I were excited to find the older episodes online so we could introduce it to our kids. Now, we can show our kids the completely rebooted series thanks to Disney XD! DuckTales for 2017 is coming and I've got the details!

We first learned that Disney Television Animation would be bringing the series back in 2015 and the time has finally come for the premiere! Based on the Emmy Award-winning series treasured by a generation of viewers, Disney XD's animated comedy DuckTales is scheduled to premiere on Disney XD on August 12, 2017 in a one-hour television movie to be presented for 24 consecutive hours.

Here's a little information in case you aren't familiar with the series (which really you should be, because it's awesome): Based on the chronicles the high-flying adventures of Duckburg's most famous trillionaire Scrooge McDuck, his mischief-making triplet grandnephews, Huey, Dewey and Louie, temperamental nephew Donald Duck and the trusted McDuck Manor team: big-hearted, fearless chauffeur/pilot Launchpad McQuack, no-nonsense housekeeper Mrs. Beakley and Mrs. Beakley's granddaughter, Webby Vanderquack, resident adventurer and the triplet's newfound fierce friend. 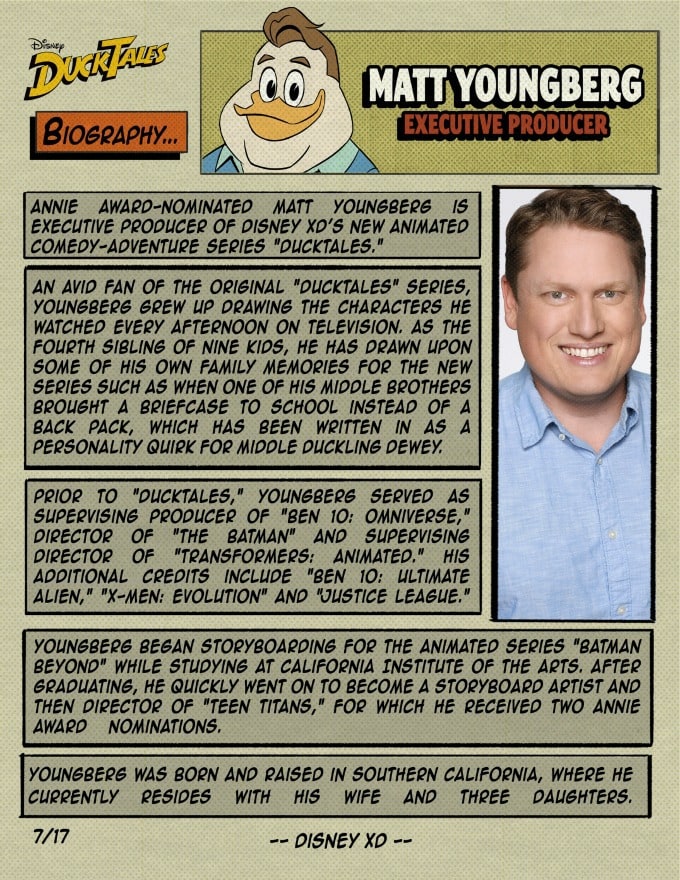 DuckTales Executive Producer Matt Youngberg and Co-Producer Francisco Angones were on hand during our visit to the D23 Expo and we had the chance to get up close and personal with them to ask them some questions about creating and developing this new show on Disney XD. Here are X fun facts I found out. 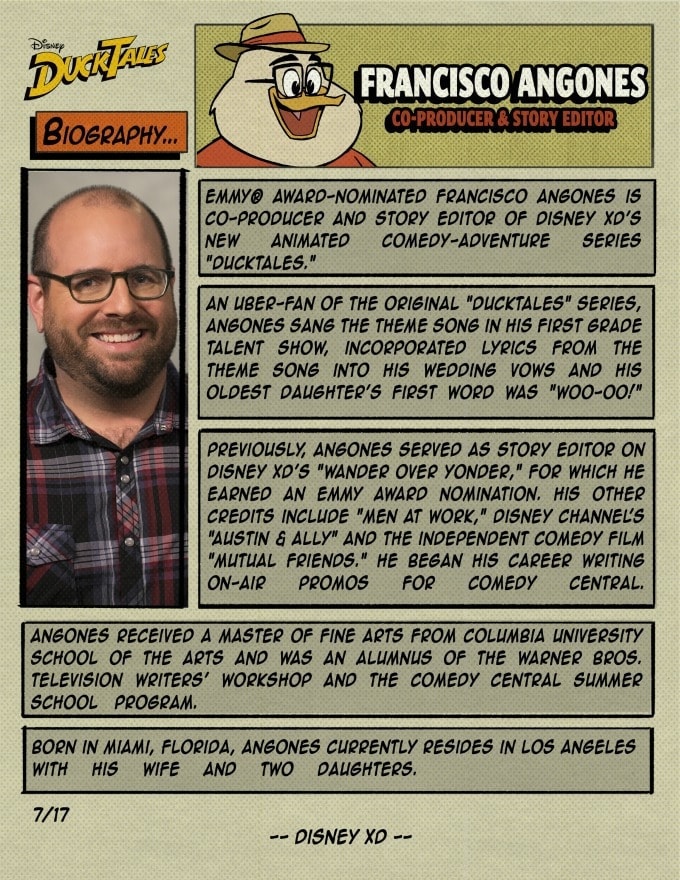 1.) They were TERRIFIED of screwing it up.

Matt Youngberg told us that while they were excited about the possibilities for the show, they were definitely scared they'd detract from the classic that they themselves grew up with. One of the biggest challenges was finding someone to bring the iconic character of Scrooge McDuck to life. 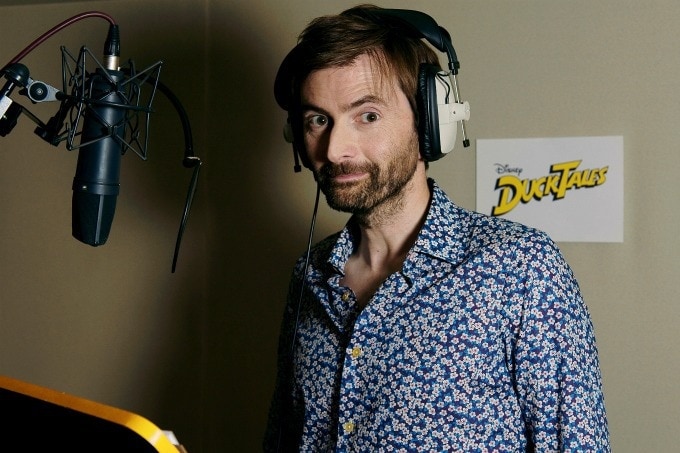 The producers told us that David Tennant, a Scottish actor and voice-actor, seemed to be the natural choice for the role, but when you think of Scrooge you think of an old miser, and David is anything but that. They said that David did a beautiful job balancing an old character with a ton of life. Another thing they wanted to do was find authentic voice actors for this globe-trotting show. I think they really hit the mark!

3.) They wanted to modernize the characters.

If you remember the original series, you know it was more about propeller planes and life before the internet. Well, DuckTales for 2017 is different. The producers wanted to modernize these characters so that kids could understand the show from the world they know. That's why you'll see one of the nephews with a smartphone. But, don't worry, although they're conscious of today, your kids won't get stuck in virtual reality. It feels like the original but told through the lens of modern storytelling. 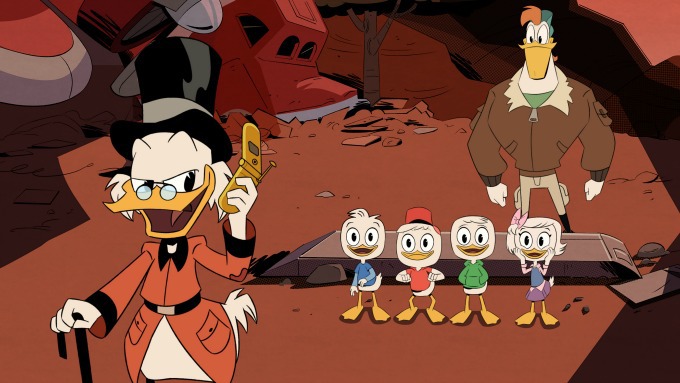 4.) Although the characters were meant to be modern, the animation of the show was meant to have a hand-drawn feel.

Matt Youngberg told us that since the original series was an amazingly animated show, they wanted to look at the comic books that inspired it. They wanted to bring it back to its roots and create a style where it looks like the comic book is brought to life. In order to do this, they added a layer of pulp behind animation to make it feel like a newspaper. In this way, it really pays homage to its origin.

Francisco told us that as a Cuban comic-book nerd going up in Miami, there was only one Latino super hero that he could recall... and he had break dancing skills (eyeroll). He wanted to give his kids a Latino superhero, so he looked at the original character of Gizmoduck and immediately thought he had all the traits of  Lin Mauel Miranda.

But, he thought that they'd never be able to get him to play the part. Francisco said, "When I wrote the episode,  I sent it to him and a letter explaining why I wanted him to do it. And he said he was a huge fan of the show and he cried when he read the letter. I never worked harder on anything than I did on that letter." He was thrilled that Lin wanted to play the part and is truly enthusiastic about it.

In addition to talking to the producers of the new DuckTales for Disney XD, we also had the opportunity to screen the first episode of the DuckTales before it's big premiere. I had pretty high expectations since I loved the original series so much. Before I get to my thoughts, I've got a few short videos so you can see the style and animation:

Check out the NEW DuckTales for 2017 theme song here:

Get a first look at DuckTales for 2017 here:

As I mentioned above, the animation is a bit different, but I love it. You can tell it's inspired by the original series, but it gives the reboot its own personal style. I also think kids are going to like the new look.

The characters are just as funny and lovable as you're used to and the voices are pretty spot on. While I was a bit leery to hear Scrooge McDuck's voice since I was so accustomed to hearing Alan Young voice the role for so many years, I have to say that David Tennant does a fantastic job. I'm so excited to see where the series is heading and I know that this is a cartoon I'll actually enjoy watching with my kids.

Disclosure: I attended an all-expense paid trip to the D23 Expo courtesy of Disney. As always, all opinions are my own.