Planning a trip to Walt Disney World Resort? I just visited this Resort hotel during the Zootopia Event and I'll tell you why the Animal Kingdom Lodge needs to be on your short list of places to stay! You'll step into the heart of Africa and have ample opportunity to see some of the most magnificent animals on earth. Plus, you'll get all of the benefits of staying on Disney property. 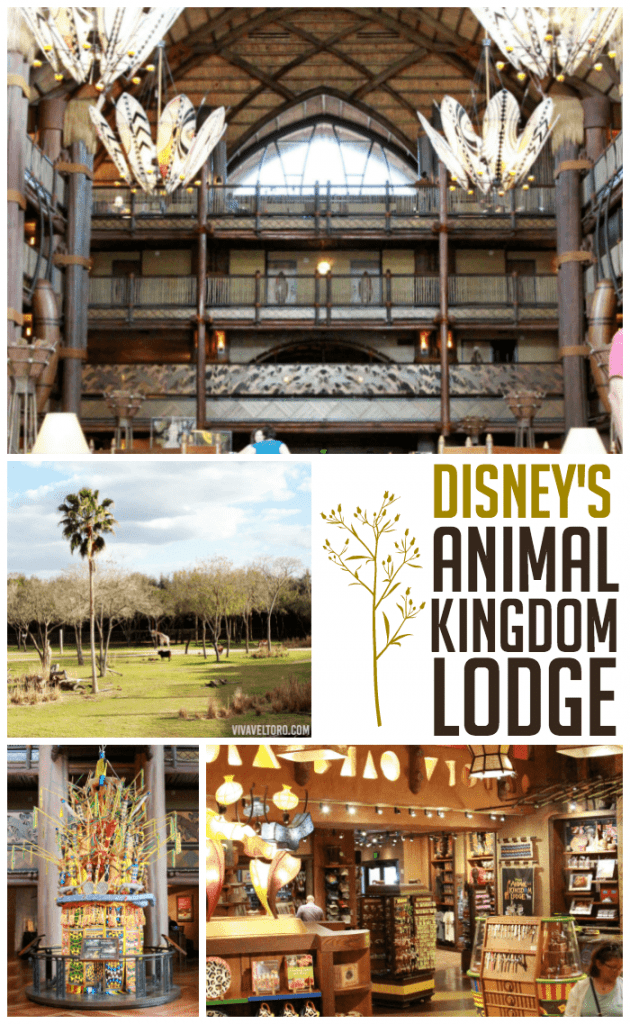 I've partnered with Disney for this review of the Animal Kingdom Lodge.

One of my very favorite childhood memories was visiting Walt Disney World. We flew down from Connecticut and stayed at a Disney resort, and to put it mildly, it was AMAZING. I was ecstatic to be immersed in all things Disney. I distinctly remember that the soap and shampoo bottles in our hotel room had those iconic Mickey Mouse ears on the label and I was so excited to see them. I quickly hoarded the little bottles away in my suitcase so I could save them. From taking the train around the Magic Kingdom to visiting the impressive wave pool at Typhoon Lagoon, that trip holds such a dear place in my heart. Now that I'm a parent, I'm always seeking out ways to provide the best experiences and memories for my children. When I walked into the lobby of Disney's Animal Kingdom Lodge for the Zootopia Event, I knew my family (especially my 3.5-year-old son) would absolutely love it. 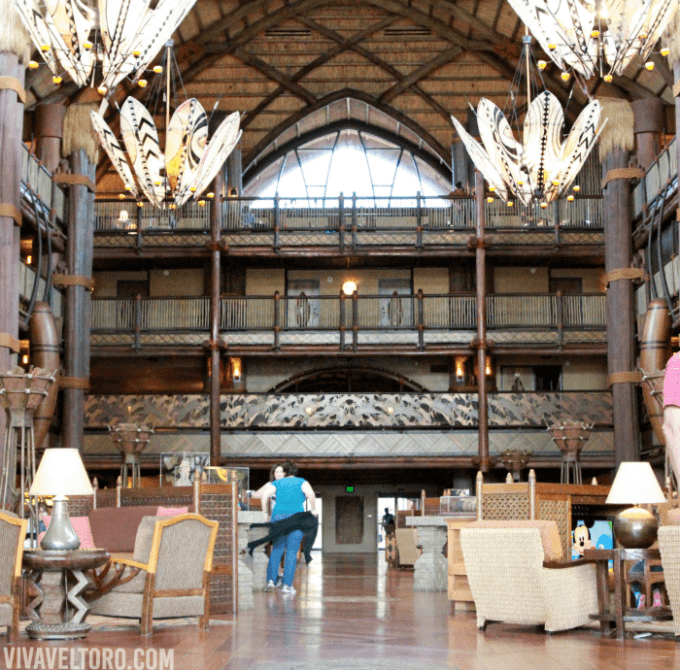 I figured the Animal Kingdom Lodge would be magnificent, so when we found out we'd be staying there during our press trip to cover the newest film in the Walt Disney Studios Animation Studios lineup, I had fairly high expectations. I was welcomed by several friendly cast members when I walked into the Jamba House and the lobby was grand, warm, and welcoming. It also houses a large collection of African art. 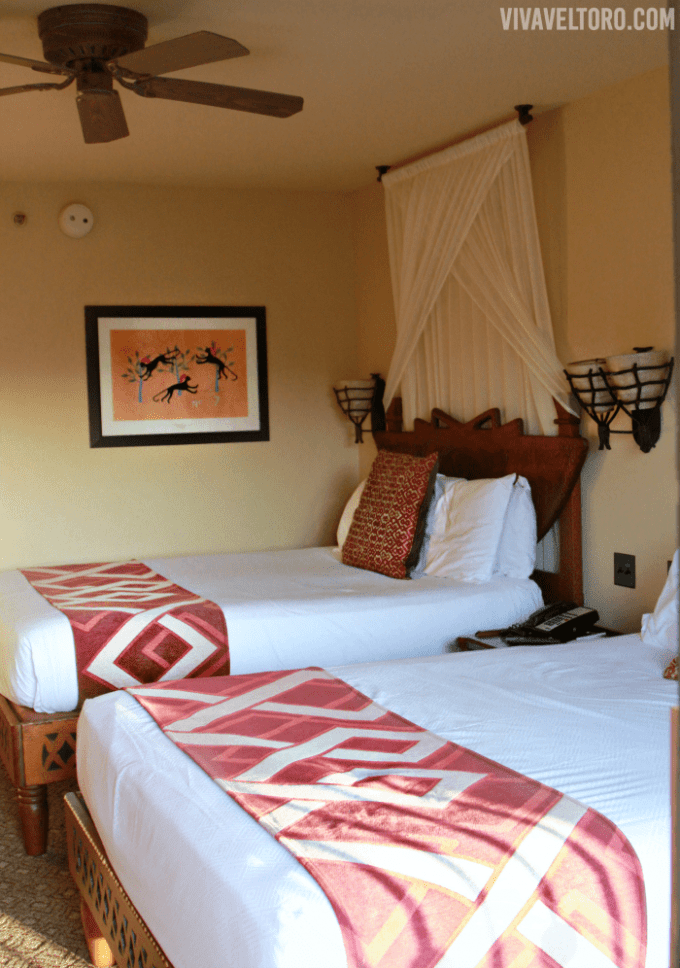 I was given my Magic Band and assigned to a room on the second floor with a Savannah View. If you aren't familiar with Disney's Magic Band system, it's basically a wrist band that allows you to easily access the plans and vacation choices that you’ve made with My Disney Experience. You'll use your Magic Band and as your room key, to enter the theme parks and water parks if you've purchased tickets and linked them in your My Disney Experience portal, check in at FastPass + entrances, connect Disney PhotoPass to your account, and charge food and merchandise to your room. I used my customized Magic Band to unlock my room and found two double beds, an eating area, a large armoire with TV, and a small refrigerator. As a parent, I always appreciate the fact that Disney resorts have an in-room refrigerator to store my kids' milk, snacks, etc. There were also double sinks and a clean bathroom with shower. Like the hotel and lobby area, the rooms are decorated with a stylish African flair. 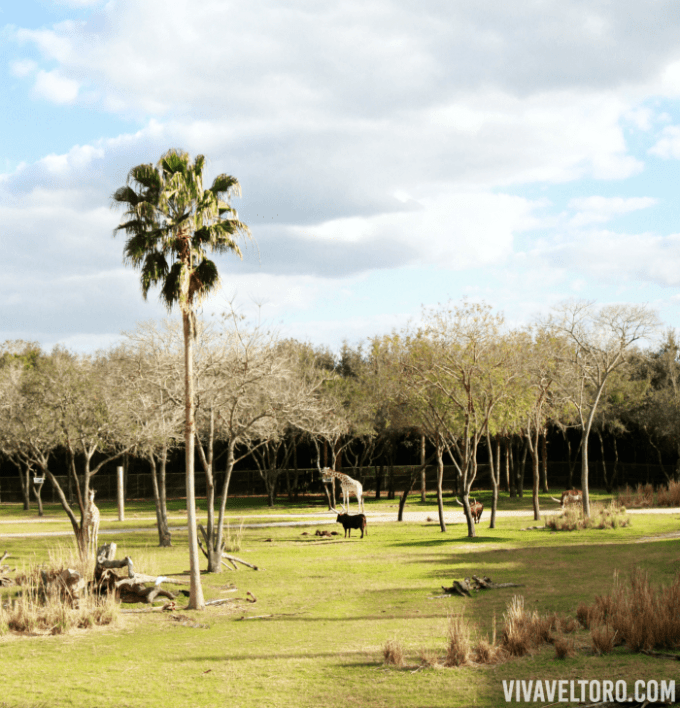 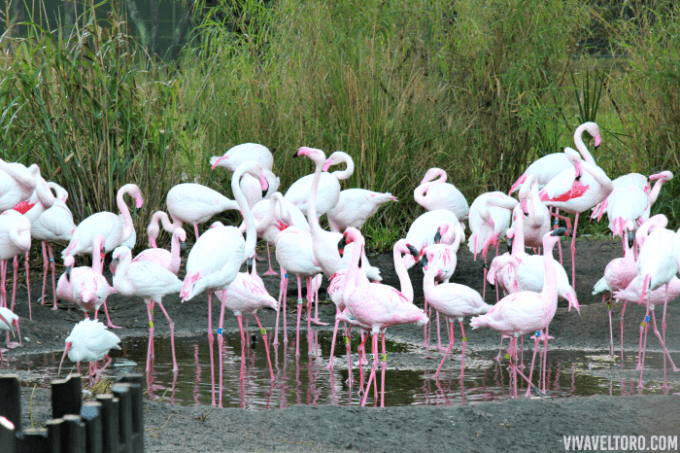 I didn't realize how amazing a Savannah View would actually be until I opened up the sliding glass door to the balcony. I immediately laid eyes on giraffes, Ankole cattle, gazelles and several species of birds. It was so cool to see these animals up close in such a peaceful setting. The Animal Kingdom Lodge has over 30 species of African wildlife including zebra, kudu and a flamboyance of flamingos. I love that the Animal Kingdom Lodge includes a Wildlife Field Guide in each guest room so you can identify the animals as you see them. 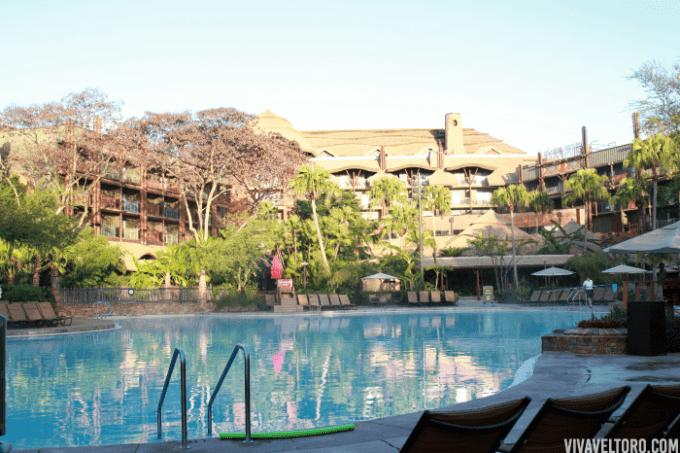 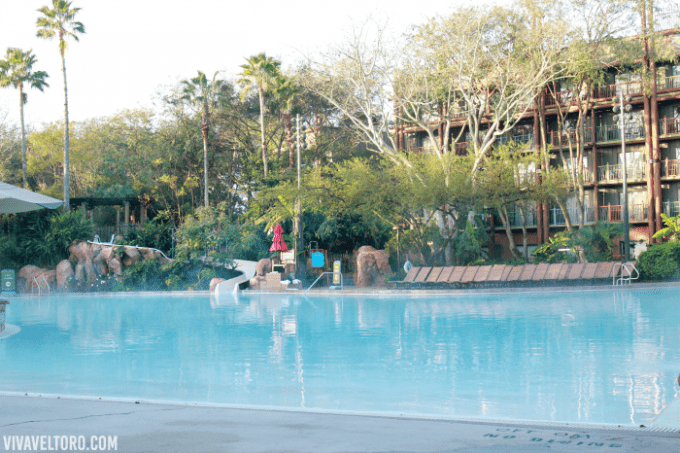 The Animal Kingdom Lodge boasts 2 pools; the 11,000 square-foot Uzima Pool with waterslide at the Jamba House and the Samawati Springs Pool at Disney's Animal Kingdom Villas - Kidani Village. The Uzima Pool features a gently sloping, zero-depth entry point, which is great for kids, and it also has a children's wading pool and two whirlpool spas. Right behind the pool is also a great children's playground. 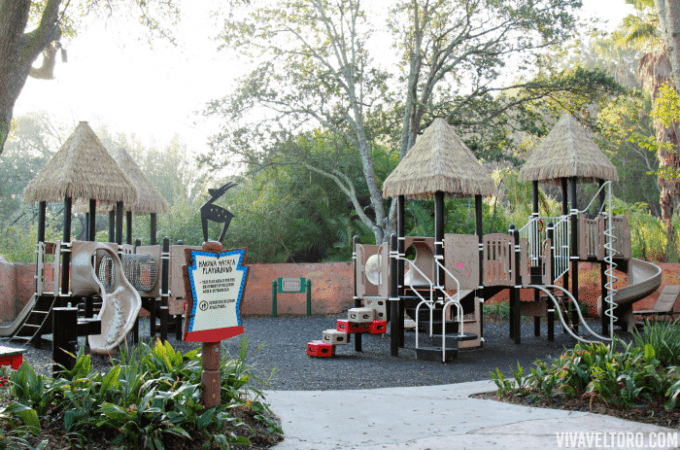 While staying at the Animal Kingdom Lodge, I was able to take advantage of a few of their dining options. I had a quick lunch at The Mara and later we had a lovely evening at the Victoria Falls Lounge. I also ordered room service one morning for breakfast and was not disappointed with the selection or quality of the food. I did have to wait about an hour for my order since I didn't order in advance, but that was no problem for me. There are a few other restaurants on property that include Boma, Jiko, and a pool bar. There's also the Wanyama Safari experience that features an up close and personal animal experience and a feast afterward. We spent some time in Jiko while interviewing Jason Bateman from Walt Disney Animation Studios’ 55th animated film Zootopia, and I thought the atmosphere was terrific. 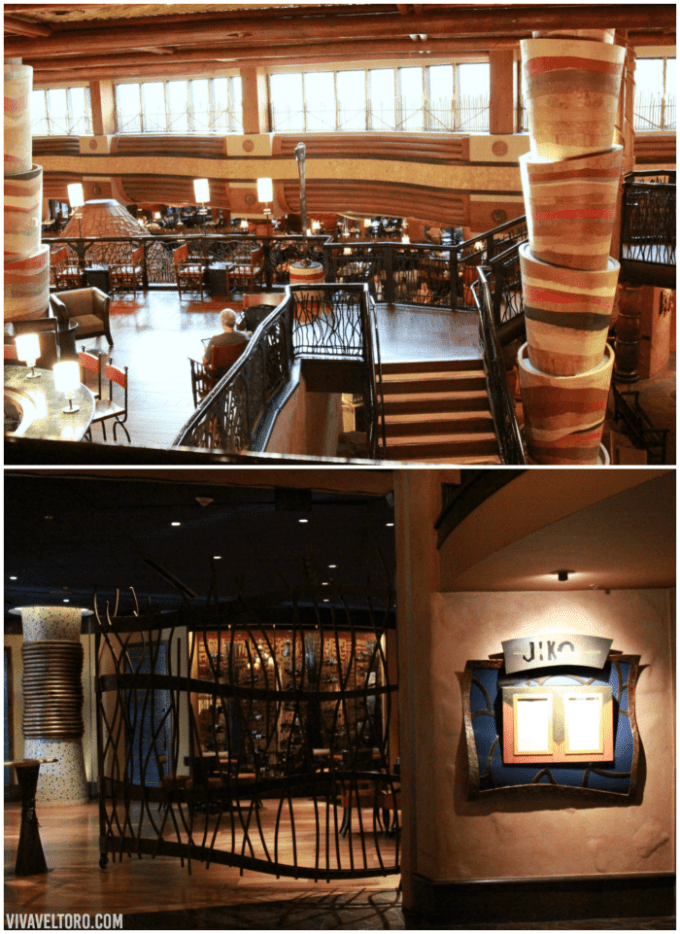 One of the biggest reasons I love to stay on Disney property is the availability of the complimentary bus transportation. Most areas throughout Walt Disney World Resort are accessible by their buses and they run very frequently throughout the day. These buses make traveling within the Walt Disney World so convenient. You can easily hop from the Animal Kingdom Lodge to Magic Kingdom to Disney Springs and so on. You can travel wherever your heart desires and it's easy and free. 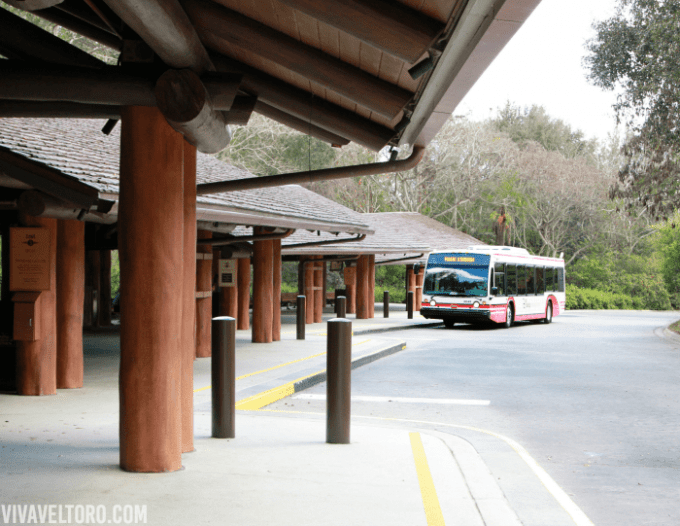 Since I was traveling from Florida, I didn't have the opportunity to experience Disney's Magical Express, but it sounds fantastic. Instead of landing at Orlando International Airport and taking an expensive cab ride or renting a car to get to Walt Disney World Resort, you can reserve complimentary motorcoach transportation to and from select resort hotels. Plus, it includes complimentary luggage delivery. This is just one more way that Disney goes above and beyond to make your trip as magical (and stress-free!) as possible.

Another perk of staying at a Walt Disney World Resort hotel? Extra Magic Hours that offer a rare and unique opportunity to enjoy additional time in the park beyond the standard operating schedule, at no extra charge. This perk is only offered to guests of select resort hotels and means that you can enjoy your favorite Disney parks one hour earlier than regular opening time and up to two hours after regular closing time.

I had a fabulous stay at the Animal Kingdom Lodge for the Zootopia Event and would absolutely recommend it to those wanting to stay in the heart of Walt Disney World. You'll enjoy spectacular views of animals and have had access to all the perks of staying on Disney property (which truly makes traveling with a family so much easier and more enjoyable!).

Disclosure: I partnered with Disney for this review of Disney's Animal Kingdom Lodge for the Zootopia press event. All opinions are my own.