Home » 5 Car Seat Safety Tips That Every Parent Should Read 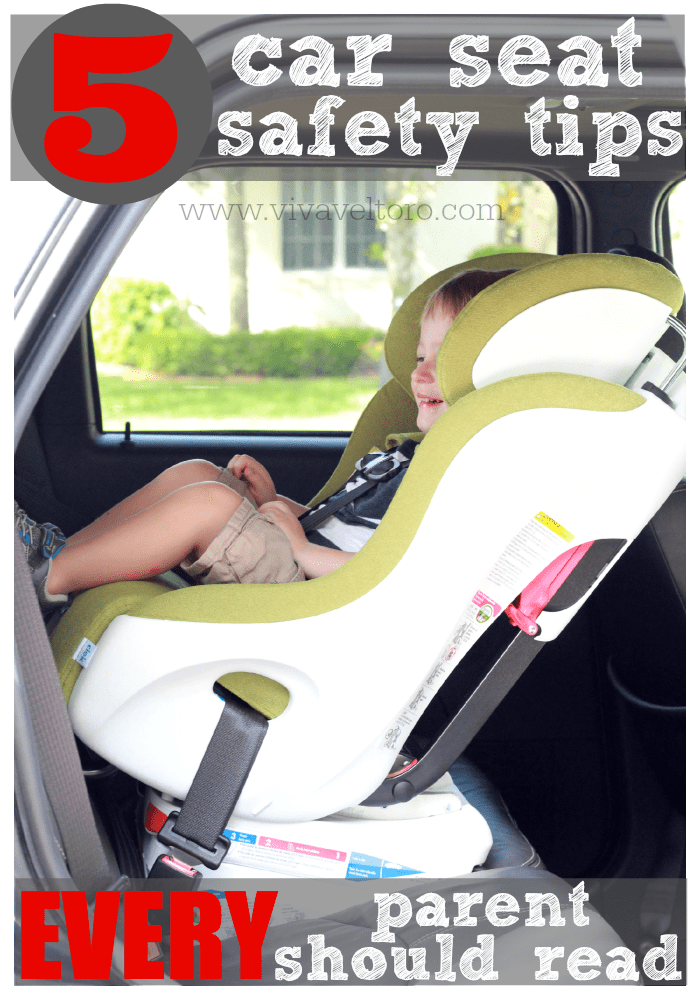 Seemingly overnight, my friends and I have grown up. Most of us are married with kids and my social media feeds are now constantly updating with the latest adorable photo of little ones hitting their milestones or just being cute. A lot of these photos happen to be taken while the child is in his or her car seat. While I want to take in all of their baby goodness, I'm usually distracted by the fact that the child is incorrectly harnessed into their seat, or the seat itself is tenuously placed in a not-so-safe position. Please, don't get me wrong - I'm not here to judge, I'm here to help. I'm not perfect and I made several mistakes before I started reading more about car seat safety and reviewing car seats on this blog, so I just want to share some of the things I've learned and I'm hoping even one person can take something away from this post that might impact their child's safety.

Here are the top 5 car seat safety tips that every parent should read:

1. The top of the shopping cart is NOT the place to rest your infant car seat.  We've all seen it. Heck, I did it before I knew better. You release your infant car seat from it's base and prop it up on top of the shopping cart - reassured by the little click you hear from your infant carrier, thinking your carrier was made to fit and be compatible with the shopping cart. This is false. In fact, it's not only false, it's dangerous. Why do we see so many people doing it then? Although information has been around to dissuade people from placing their car seats on top of carts for years, like in this article from the journal Pediatrics from 2006, it still seems like the obvious place to put your little one so you can see them and keep them close. Please, place your infant seat inside of the shopping cart's basket - that is the only safe place. Or, better yet, try babywearing! That way you'll be handsfree, have your entire cart open, and your baby will be close and comfy without intrusive strangers trying to touch or breathe on him or her.

2. The chest clip is a CHEST clip.  It's not a belly clip, and it's not a neck clip. The purpose of the chest clip is to ensure the harness straps are where they need to be in case of an accident. In a crash the clip serves no purpose at all - it's merely there to make sure the harness straps are properly positioned to keep your child safe. Many other countries don't use or even offer chest clips on their seats, but since we're in the USA we've come to expect the chest clip to be a standard feature on our seats. So, we might as well use them correctly. The chest clip should be placed at the mid to upper chest area. Aim to align it at the level of the armpits and you'll be good to go. In fact, many brands even place a little image of proper placement on the clip itself.

3. The middle of the rear seat is the safest place for baby to be. I think it's fairly common knowledge now that children under 12 years of age should be riding in the back seat (due to the possibility of injury from airbags), but maybe it's not so common knowledge that the middle of the back seat is the safest place for a child to sit or car seat to be installed. When we had our newborn, we simply installed the car seat behind the passenger seat and that was that. It wasn't until I saw a friend placing her infant car seat in the middle of the back seat that I stood back and thought about it (then did more research on the subject). In a 2008 study published in Pediatrics it was found that, "Children seated in the center rear have a 43% lower risk of injury compared with children in a rear outboard position."  Forty three percent! Sure, it's a little inconvenient having to get into the car and hoisting your child into the center position, but in the event of a crash from either the driver or passenger side of the car, they're in a more neutral zone and away from the impact. Be sure to check your car's manual though to be sure that the middle of the back seat is an option for you though. I was only able to use this position with the seat belt in our compact SUV since the LATCH anchors were too far apart.

4. Extended rear facing is the way to go.   Did you know that motor vehicle injuries are a leading cause of death among children in the United States? The absolute number one cause of death. In 2011, the American Academy of Pediatrics updated their recommendations for car seats to state, "​All infants and toddlers should ride in a rear-facing car seat until they are at least 2 years of age or until they reach the highest weight or height allowed by their car seat's manufacturer."  (source: HealthyChildren.org  HealthyChildren.org). See, the key words here are at least and or until. I've done a lot of research on this subject. I've read and read... then read some more. When I came across an article by Car Seats For The Littles titled "Why Rear Facing, the Science Junkie's Guide," I thought they nailed it on so many levels. They specifically mentioned an article published in Injury Prevention that found “the odds of severe injury for forward-facing infants under 12 months of age were 1.79 times higher than for rear-facing infants; for children 12 to 23 months old, the odds were 5.32 times higher.”  This study only measured data from children 2 and under because that's where the recommendation officially stops. That doesn't mean we have to or should turn our kids around at age 2. Nothing magically changes at 1 year or 2 years - they are still tiny human beings and the impact of a collision can be absolutely devastating to their fragile forms. If you're a visual person and need to see the difference between forward facing and rear facing children in the event of a crash, this YouTube video is a must-see. It's eye opening for sure. A lot of people think their child will be too uncomfortable and "crunched" while rear-facing and I think unless your child is unusually tall that will not be the case. My son is currently 24 months old and in the 85th percentile for height and is not the least bit uncomfortable while rear-facing. Most kids sit with their legs cross or drawn in naturally so this really shouldn't be a problem.

5. The LATCH is not always your best bet for installation. Most vehicles manufactured since 2002 have the LATCH system in place. If you're unfamiliar, LATCH stands for  Lower Anchors and Tethers for Children. Since up to 75% of car seats are installed incorrectly, the LATCH system was designed to make installation easier. Most people have come to know and rely on the LATCH system and that's what they use to install their seats. However, with new regulations put into place in early 2014, the LATCH may not be the safest method for your child. Basically, the new regulations state that you should NOT use LATCH system to install a car seat if the combined weight of the child and the seat is 65 pounds or higher. That means you need to check your car seat to find out the weight of the seat and see if you're over the 65 pound combined weight limit. The only exception to this rule that I know of is if you're using a Clek Foonf in forward-facing mode with the LATCH and safety belt (this is the only car seat that can utilize both due to it's design). Car Seats for the Littles has a great list of manufactures (both vehicles and car seats for you to reference). Another quick point I wanted to make was that you should be sure to read YOUR vehicle's manual AND the car seat manual entirely before installing the seat. When I went to move my son into the middle of the back seat, I simply dug around for an anchor on each side and secured the seat. Thankfully, I went to visit my local CPST (Child Passenger Safety Technician) to have my seat checked, and she found my error. My vehicle only allows for the LATCH to be used on either the driver side or passenger side of the back seat. The anchors are too far apart for them to be used for middle of the seat installation, so I have to use the safety belt instead. Had I read the manual first, I would have known that and not risked my son's safety by driving him around with an incorrectly installed car seat.

Finally, I'd really like to encourage everyone to make an appointment with your local CPST to have your car seat(s) installation checked.

Are any of these safety tips news to you?
Did you make an errors when installing your child's car seat for the first time?

The car seat featured in this post is the Clek Foonf. Check out my full review of the Foonf here!
Special thanks to Clek for sending me a Foonf at no cost to facilitate a review.

Pin5K
Share652
Tweet76
Reddit
Yum
5K Shares
« How To Make a Book Safe To Hide Your Treasures.
Extended Rear-Facing until age 4? It's possible with the Clek Foonf Convertible Car Seat! »